Note: University of Nevada, Reno President Emeritus Joe Crowley had an enormous impact on the Reynolds School of Journalism’s creation. Below is an article written by Warren Lerude, professor emeritus at the Reynolds School, that details just how instrumental Crowley was. This article was originally published on Nov. 29, 2017, in the Reno Gazette-Journal. 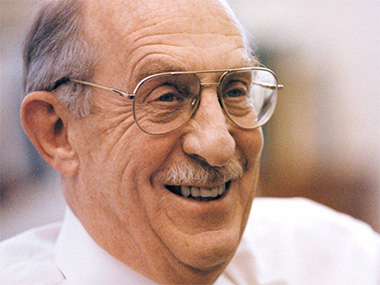 Among Joe Crowley’s many accomplishments as president of the University of Nevada was leading the academic and administrative way in the creation of the Reynolds School of Journalism on the Reno campus.

In so doing, Joe was relatively rare among his presidential peers at American universities by putting journalism on an equal footing in the academic world through the establishment of a new independent school.

The process was complicated. Here’s how it happened: In l977, Rollan Melton, president of Speidel Newspapers based in Reno which had become Gannett West following the merger of the two companies, and I, as publisher of the Reno Evening Gazette and morning Nevada State Journal, approached Max Milam, Joe’s predecessor as president of the university.

We proposed to Milam that he ask the board of regents to elevate the small but good department of journalism to the full status of an independent school such as a medical school or law school. We pledged to use our national contacts and resources to help develop the school of journalism. We based our assumptions on our knowledge of the professionally oriented and academically sound Pulitzer School of Journalism at Columbia University in New York City.

Milam turned us down, saying the journalism department would remain in the College of Arts and Sciences with English, psychology, physics, mathematics, political science, art, history, philosophy and other disciplines.

When Joe succeeded Milam as president in l978, we renewed the proposal with him. Joe trusted that Rollan, a l955 journalism graduate and I, in l961, would follow through with our pledge of support and round up more.

Joe understood the vital role journalism played in democracy as a leader in the enduring fight to protect and advance the First Amendment.

And Joe knew the societal value, for instance, that if the UNR Foundation were to pay a celebrity speaker a substantial stipend to draw an audience to a major fund-raising dinner for the university, chances were high the speaker would be a nationally acclaimed journalist.

Joe had first-hand knowledge of journalism as a sports writer as a young man and he had the kind of inquisitive mind shared by scholars and journalists.

Joe valued good writing, often bringing his own essays during his political science professor days to the newspapers for publication. Joe had a love affair with the written word that he would develop through the decades as an author of books and a creator of poetry.

So, Joe agreed, and he began the complicated process to create and build a full school of journalism.

This led to teamwork in approaching national media owner Donald W. Reynolds, based in Las Vegas, and his chief executive Fred W. Smith, who arranged for funding, first for a visiting professional professor program and later with a $2.5 million challenge grant for a building. This was met partially by alumni and friends who contributed about $400,000 in donations.

The Board of Regents and Nevada Legislature, honoring Reynolds by naming the school for him in l984, subsequently provided the remaining $2.1 million matching funds arranged by fellow Nevada journalism graduate Jim Joyce through his contacts with lawmakers including Senator William J. Raggio.

The marvelous building opened in l993 under the planning leadership of the school’s first dean, Travis Linn, who Joe had the vision to hire. Travis, a Harvard educated, CBS News executive, blended academic and national professional journalism distinctions.

The Reynolds Foundation subsequently provided significantly more funding for endowed chairs and about $10 million to advance the journalism building into high technology for futuristic education.

Joe had deep understanding of the educational value of a school of journalism in the teaching of public affairs news research, good writing and the difference between facts, interpreted “truth” and political propaganda. Most universities do not have such independent free standing schools of journalism to explore media literacy topics and many do not even have departments of journalism.

Joe also knew that Nevada journalism graduates had developed a sense of pride in and loyalty to their alma mater over the decades shown by creating ethics, reporting, writing, editing, publishing, advertising, public relations, multimedia and First Amendment programs through voluntary donations and endowments.

Joe’s commitment has been supported by the three presidents who followed him including Marc Johnson today and seven deans of journalism including today’s Al Stavitsky. Dean Al, as he is affectionately called, leads the school with 20 full-time faculty and more part-time professional adjunct instructors, several staff, 550 student majors and distinguished alumni spread from coast to coast and around the world.

When Joe retired in 2001, he had a wide choice of where he would like to have his presidential emeritus office be located on the campus. He chose to have it be in the journalism building.

There, Joe was right at home and much appreciated.

Warren Lerude is professor emeritus in the Reynolds School of Journalism and a Pulitzer Prize-winning journalist. 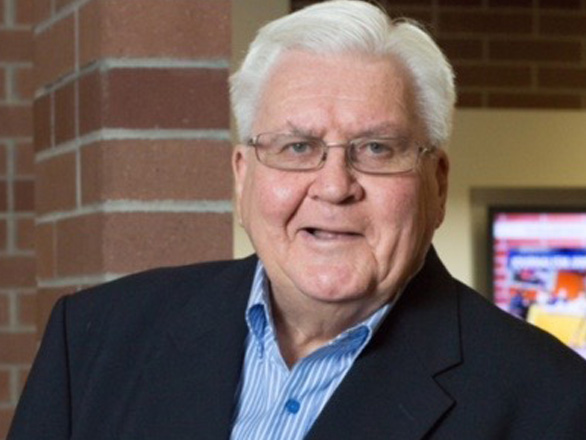