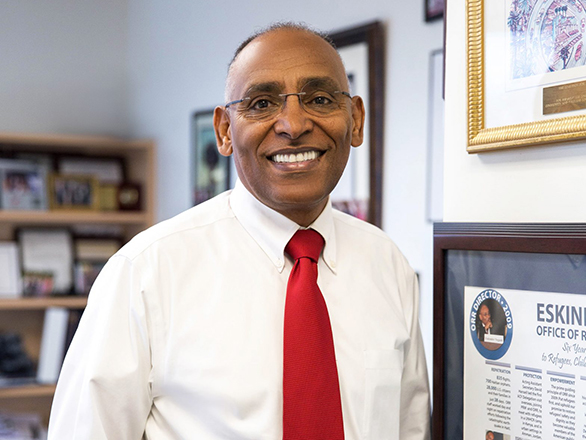 Eskinder Negash is President and CEO of the U.S. Committee for Refugees and  Immigrants (USCRI), an organization founded in 1911 to protect the rights and address the needs of persons in forced or voluntary migration worldwide and support their transition to a dignified life. Negash is a recognized senior executive leader and brings nearly 40 years of proven non-profit management experience on behalf of refugees and immigrants.

Prior to joining USCRI, he served from 2009-2015 as Director of the Office of Refugee Resettlement (ORR), the largest government-funded refugee resettlement organization in the world. With a budget of over $1.5 billion, the ORR plays a critical role in providing essential services to a wide range of vulnerable people through the Resettlement Program, Rescue & Restore anti-trafficking campaign, and the Unaccompanied Children’s Program. Under his leadership, ORR served more than 850,000 people in six years.

Prior to his appointment by the Obama Administration, Negash served as the Vice President and Chief Operating Officer of USCRI for seven years. He also was the Vice President and Chief Administrative Officer of the International Institute of Los Angeles for 15 years. Negash served as a board member with several non-profit organizations, including two years as Chair of the Joint Voluntary Agencies Committee of California, Chair of the California State Refugee Advisory Council, and Board Member of the Coalition for Human Immigrant Rights of Los Angeles (CHIRLA).

In 2016, Negash served in the Secretary of State’s Advisory Committee for Public-Private Partnership considering the formulation of U.S. polices, proposals, and strategies for developing public-private partnership that promote shares value with the private sector worldwide. In 2009, Negash received an “Outstanding American By Choice” award from U.S. Citizenship and Immigration Services in the Department of Homeland Security, which recognizes naturalized U.S. citizens who have made significant contributions to both their community and their adopted country. In 2010, the International Rescue Committee (IRC) honored Eskinder Negash as one of ten distinguished men and women whose stories of hope and transformation epitomize the refugee journey.