College's Brian Kelley engages in service, shares his reflections to mark the day

"The University offered the best educational opportunities for what I want and enjoy doing," he said. " I enjoy spending time outdoors and sought out a potential career in which I would not be stuck sitting behind a desk and where I would be outside."

Brian said, "In Omega Delta Sigma, we provide brother- and sisterhood to fellow veterans and assist in the transition from the military to scholar and to civilian life. We strive to provide the sense of belonging that some veterans miss once they are no longer serving. We are a family."

The fraternity reaches out to all different kinds of veterans to help them take advantage of benefits that assist with school.

"Whether you were a desk jockey or a ground pounder," Brian said, "we all did our time in the military. By going to school, whether it be traditional college like the University or a trade school, get that education. You earned it."

Brian encourages veterans to take the experiences they created in the service and use them to progress to the next part of their lives. He encourages his peers to break from stereotypes, grow into the people they want to be, get out of their comfort zones and ask for help when needed.

"Contrary to popular belief," he said, "we are not superheroes. We are human."

On Veterans Day, Brian's involvement with University Veteran Services and Omega Delta Sigma was particularly visible. He helped to plant about 2,000 flags on the lawn in front of the Joe Crowley Student Union. There, he led a flag retirement ceremony. The annual ceremony, which provides a fitting end for the symbol of our nation to soiled, tattered or unserviceable flags,  is a longstanding tradition of our University and Western Nevada College.

During the ceremony, Brian reflected on how collective belief imparts meaning to symbols such as our flag. He also spoke about how the flag has been used throughout its history.

"This symbol has gone into every battle in which there have been Americans," he said. "It flew over some battles that were never declared. But, the flag, being a symbol for all, has not been relegated to glory on battlefield only.

"In 1912, when immigrants in Lawrence, Massachusetts, walked off their mail jobs seeking better pay, they paraded behind the American flag. A half-century later, civil rights marchers from Selma, Alabama, to Jackson, Mississippi, marched behind American flags. 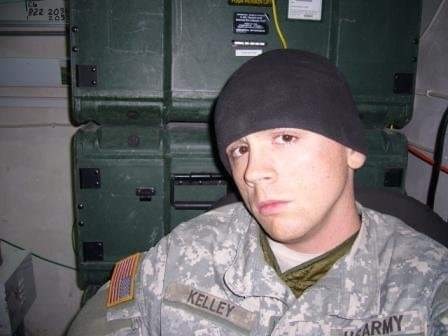 A young Brian Kelley during his second deployment. 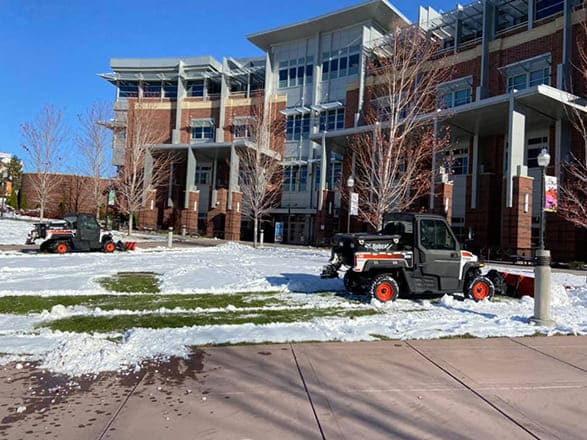 University employees clear the lawn of snow in preparation for the flag planting and retirement ceremony. 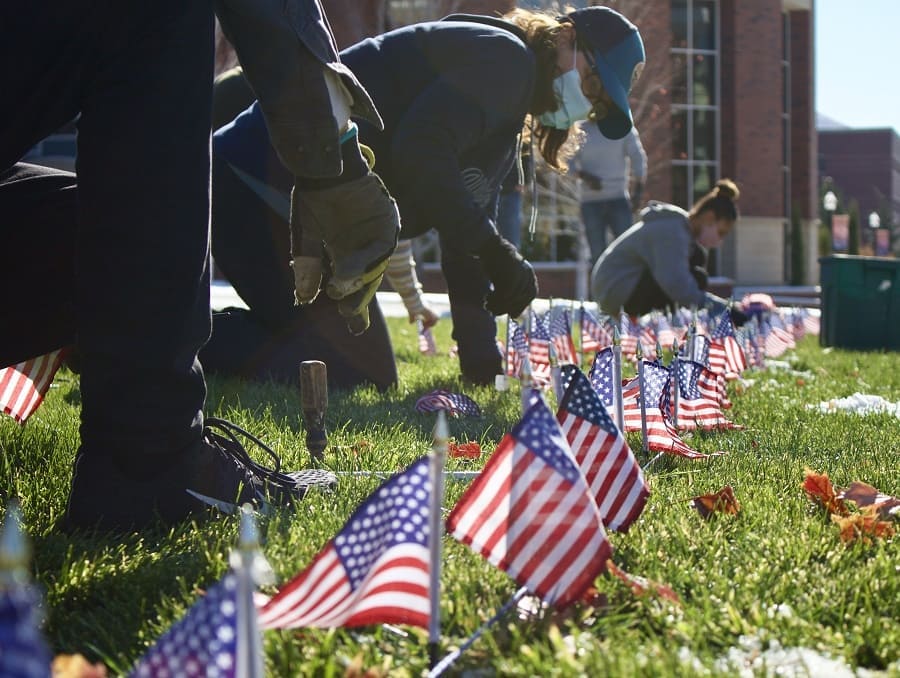 University employees and volunteers work to cover the lawn in American flags for Veterans Day. 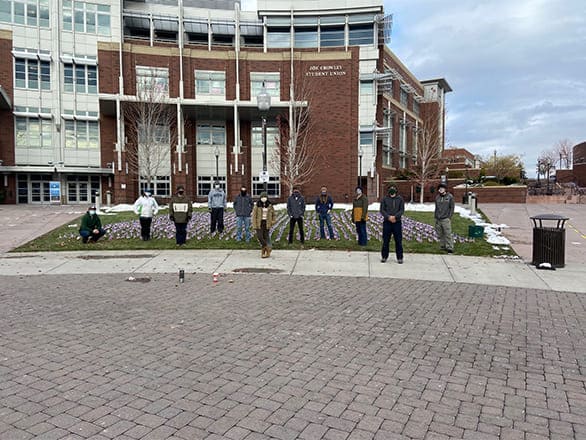 Flag planters reflect together after their work is ended.

"Veterans Day is a day to remember those who have signed up and fought for our country. A day to give thanks to those who gave up part of their life to defend our country." -Student Veteran Brian Kelley

Collaborative roundtable discusses services and resources for, and the importance of, supporting Nevadans aged 55 or greater 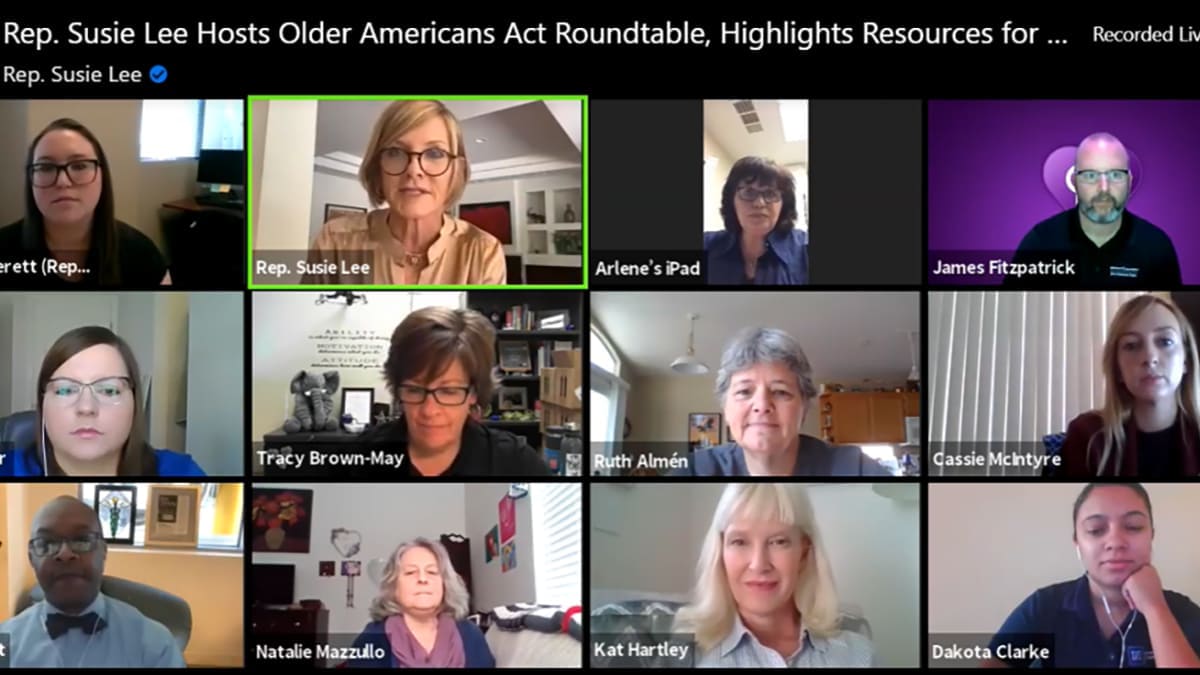 Extension and others joined a live conversation last month on helping Nevada's elders during the pandemic.

Lives have been turned upside down by the COVID-19 pandemic, and one population particularly vulnerable to this turmoil are Nevada's elders. To help, Extension, Rep. Susie Lee and others held a Facebook Live roundtable last month. The event discussed Older Americans Act Services, which were augmented in federal law earlier this year. Nevadans are eligible for and need these services, but not all know about them.

"The dozens of critical programs funded by the Older Americans Act are more important than ever," Lee said. "We need to ensure our seniors know how to access these services, which is why roundtables like this one are so important."

The live conversation with Lee and others centered on how we are all are taking on together the important work of serving our elders in the time of coronavirus.

During the event, Extension Healthy Aging Program Specialist Natalie Mazzulo said that data from earlier in the pandemic showed we had over 450,000 homebound elders in our state. For the most part, she said, those elders remain isolated. She talked about how Extension is helping to reach those isolated elders through our partnership with the Nevada COVID-19 Aging Network, our healthy-aging newsletter and new programs.

The course will provide opportunities for directors to learn about ageism; cultural competency; the differences among dementia, delirium and depression; and how to help seniors understand information about their health. The program will provide directors with physical activity and nutrition lesson plans which they can use to offer high-quality programs for their elders.

"In this unprecedented time, many people who have never had to ask for help may have to turn to others for help. We want to make it easy for you to find and ask for the things you need to keep yourself safe at home." -Program Specialist Natalie Mazzulo 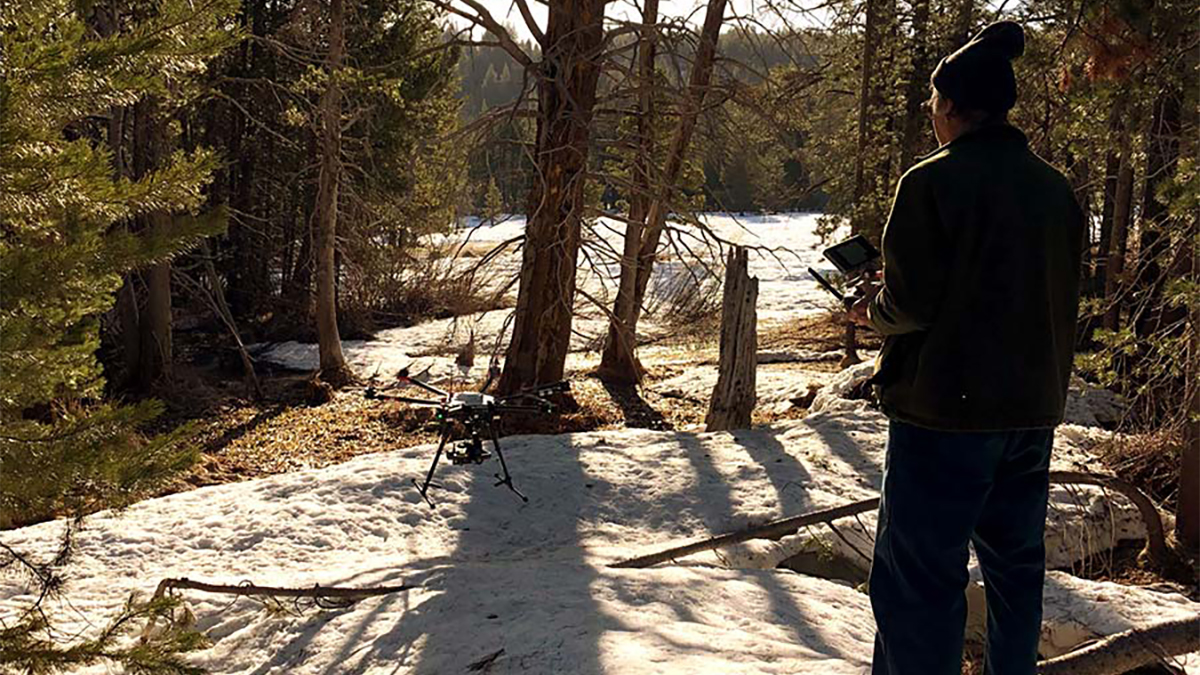 A student pilots a drone to measure the surface temperature and estimate water use at Sagehen Creek experimental forest. Photo by Adrian Harpold.

The layer of Earth where life exists, from the top of the tallest trees to the bottom of the groundwater table, is called the "critical zone." What happens to this zone in the face of natural and human disturbance, and climate change, can greatly impact our ecosystems and natural resources, including water.

Adrian Harpold, a natural resources and environmental science assistant professor with our College and Experiment Station, is part of two five-year, multi-state, interdisciplinary research projects recently funded by the National Science Foundation to shed more light on water in the critical zone and its fate in mountain forests.

"As scientists, sometimes we’ve been siloed in our own areas of study, or geographic areas," Harpold said. "The National Science Foundation believes we can make major breakthroughs in critical zone research by working across disciplines and across state lines, and I certainly agree." 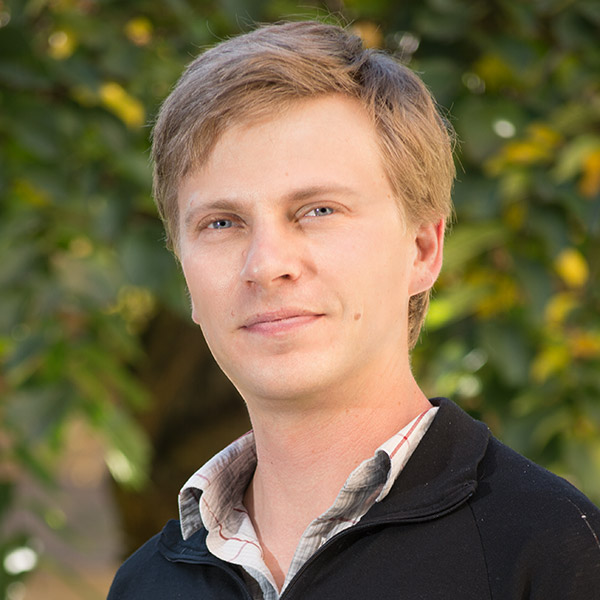 These projects will allow Harpold to offer some of his graduate students hands-on, real-world research experience and world-class collaborations in some of the Earth’s most pressing issues: natural and human disturbances, and climate change.

Leading major breakthroughs on water in the critical zone

"We derive our water supply from forests that burn. So, we need to think about how the forest burning or not burning affects how much water is available for people. If snow shifts to rain in the Truckee Basin, then there is risk that there will not be enough cold water in the summer for native fish, such as Lahontan Trout. Better understanding of the critical zone could allow targeted actions to mitigate potential detrimental effects." -Assistant Professor Adrian Harpold

Meet Adrian
Learn about his work
Donate to his work 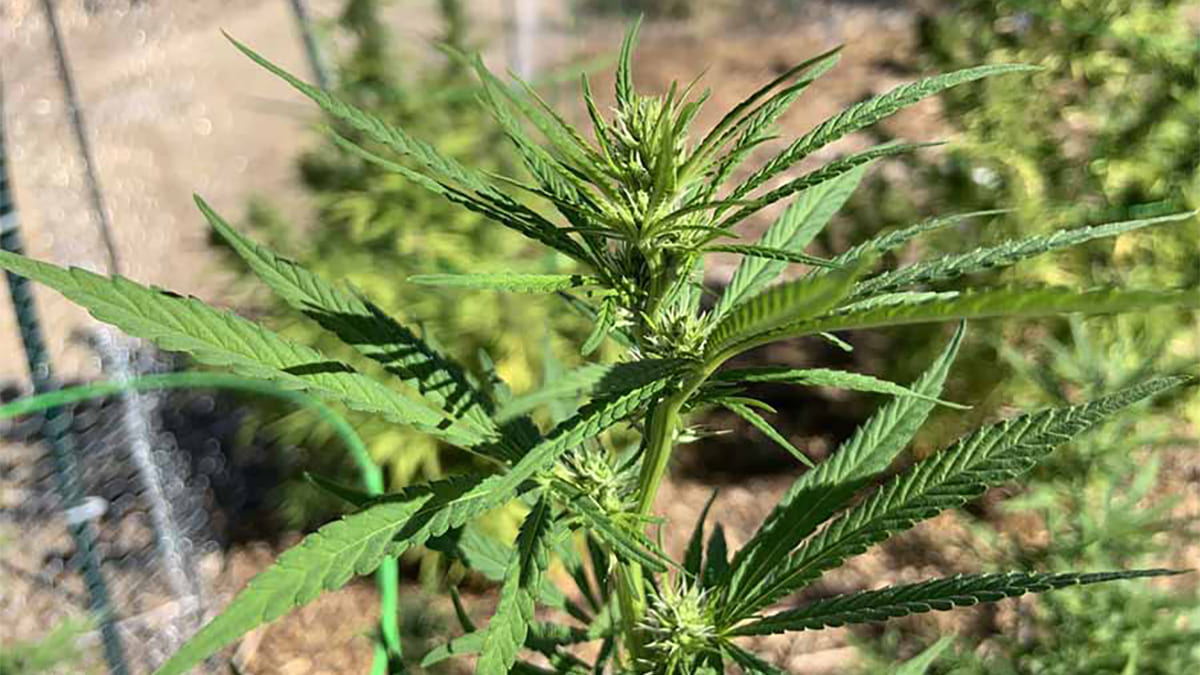 Hemp uses less water than many other crops, and its uses and popularity are growing. As a result, there is increasing interest in growing hemp in Nevada. Extension is now researching hemp varieties and best practices for growing it in Nevada, and offering online classes on the research findings. The work is being led by M.L. Robinson, an associate professor and horticulture specialist with Extension, with help from Extension’s Marysia Morawska, Lauren McGue and Master Gardener Volunteers.

"There are really positive results that we’re seeing in similar climates to Nevada when it comes to the growing of dual-purpose hemp crops," Morawska said. "Fiber, grain, hurd and oils, to name only a few, make up a huge part of the growing hemp economy, and Nevada can be a leader in the market, but we have to find the right plant genetics that work in our region. There is so much potential in this work."

Morawska and Robinson have conducted preliminary research and have hosted introductory workshops on hemp for the last few years. With growing interest and sold-out classes, they saw the opportunity to expand the curriculum beyond basic introductory courses.

The two started growing a handful of plants last year at Extension’s Botanic Gardens in Clark County in order to begin assessing the best practices for growing hemp in Nevada climates. This year, with help from McGue and Extension’s Master Gardeners, the team planted 11 different varieties of hemp at the Botanic Gardens to continue to research which ones grow best in Nevada’s desert environment. As part of the process, the team is developing best practices.

Coinciding with their research, the team is developing online classes for those interested in growing hemp, to promote it as a crop for Nevada and to provide research-based information for successful production here. The trainings will take producers through the hemp-growing process, including creating a small-business plan and getting proper licensing and certification.

"Although hemp is a great crop in many ways, there’s still a lot of research to be done. Yes, it uses less water than, say, alfalfa, but it still uses more water than some other crops. There’s a lot of information out there on hemp, but we want to narrow down the research to see how best to grow it and make it a major industry in Nevada." -Horticulture Specialist M.L. Robinson

Extension recently recognized two volunteers with its Nevada 4-H Youth Development Program for their support of and dedication to the youth of our state. AnnaMarie Thompson and Joni Test were selected as finalists for the 2020 Nevada 4-H Volunteer of the Year award. Joni was ultimately honored with the award, and its $1,000 prize to be used in developing our 4-H youth.

"These two 4-H Volunteers are amazing and show every day their support and dedication to the youth of Nevada and the 4-H Youth Development Program," Nevada 4-H Director Carrie Stark said.

"When you have people like Joni Test, who gives her whole life to youth," Nevada 4-H alumni Reana Bye said, "it gives you the opportunity to see what great leadership is like."

Recognized by our College in 2016 as the Agriculturalist of the Year, Joni was selected for this volunteer award because she was the most creative and tenacious over the last year in incorporating the reality of agriculture into her curriculum and programs for Nevada 4-H youth.

Nevada Agriculture Foundation Executive Director Sue Hoffman said, "Joni has been a volunteer 4-H leader for well over 20 years, and during that time she has mentored hundreds, if not thousands, of young people and helped them learn not only agricultural information, but she has also empowered them to become young leaders."

Extension offers the Volunteer of the Year award in recognition of the role of agriculture in our global economy and as an opportunity to recognize volunteers such as Joni and AnnaMarie, who dedicate much time and energy to enhance the lives of Nevada's youth.

Stark said, "The award is sponsored by the Nevada Agriculture Foundation, and we all greatly appreciate their support."