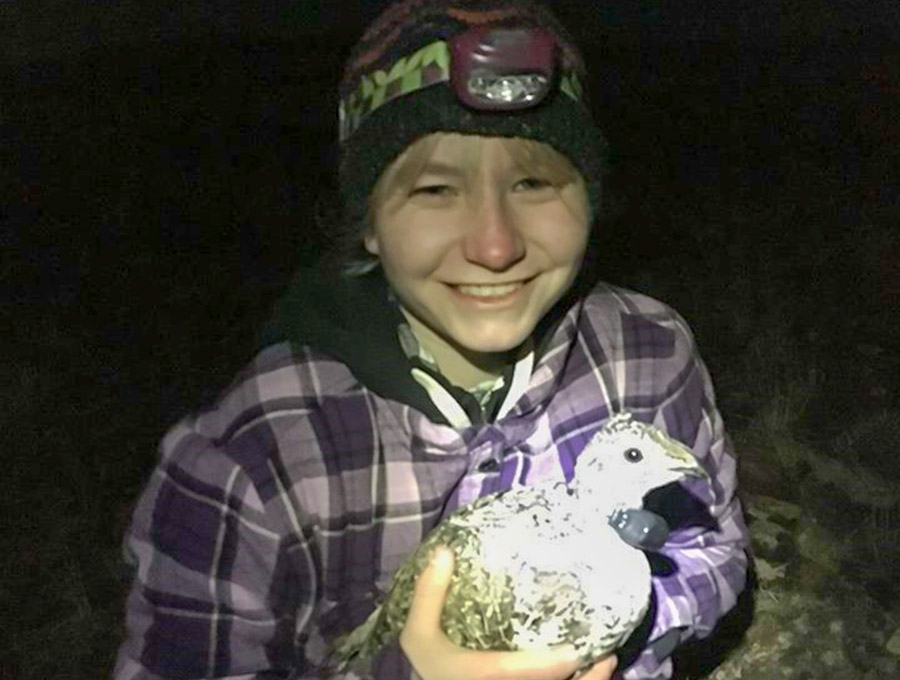 Madeleine Lohman won best master's student talk at the continent's most prestigious waterfowl conference, the North American Duck Symposium. Her invited presentation was about research she recently earned the most prestigious international fellowship of her field to support, the competitive Richard H.G. Bonnycastle Graduate Fellowship in Wetland and Waterfowl Biology.

The Natural Resources & Environmental Science student's award-winning presentation, which she delivered on her fifth day of graduate school, was about how wildlife demographics change.

"If you take a big region, maybe survival is higher in one area than another at a certain time," Madeleine said. "But maybe the next year, the other area has the higher survival rate, or maybe survival declines in both areas. These changes are caused by something."

That something could be environmental, such as a change in how much it rained or snowed, or how much land was converted from habitat to use for agriculture.

The change could also be caused by another aspect of the wildlife population's makeup and experience.

"Maybe the population is really big that year and there isn't enough resources," Madeleine said. "Or, maybe females are reproducing more and so don't have enough energy afterwards to survive."

Although changes in wildlife demographics are a basic part of ecology, research on how waterfowl demographics are different in different places is relatively rare. And, the connection between time and place and the survival, reproductive, environmental and human-caused drivers that affect waterfowl is also under-studied. To fix that, Madeleine has been hard at work.

Madeleine is studying these things by creating mathematical models and applying them to aerial and ground data, including capture-mark-recovery banding information for mallards, northern pintails and blue-winged teals, in the Prairie Pothole Region of North America. Doing this enables her to estimate how fertility and survival rates vary, and how those variations relate to waterfowl demographics, density and habitat.

"Her research will contribute to waterfowl conservation by informing how and where to best direct management efforts in light of changing climate and land use," the Institute for Wetland and Waterfowl Research wrote about Madeleine's Bonnycastle Fellowship award.

While she is researching several species of waterfowl, Madeleine's winning presentation was about just one.

"My conference presentation was centered around mallards," she said. "Their population distribution has really dramatically shifted across the Prairie Pothole region in the Midwest and southern Canada. So, we were curious about why."

Madeleine's presentation, titled "Spatiotemporal variation in waterfowl demography," was part of the conference's half-day plenary session on harvest (or hunting) dynamics and management.

"I presented with preliminary results, only looking at adult and juvenile females." Madeleine said. "But we found that survival for adults and juveniles didn’t really have any spatial trends, but reproductive rates did. We think this may be a part of why mallard distributions have shifted."

Madeleine found that areas experiencing a growth in mallard populations have higher reproductive rates than and about the same survival rates as areas that didn’t grow in mallards as much.

She said, "We also saw that over time, demographic rates fluctuated with environmental conditions and other aspects of population demography."

Her work revealed practical implications for how mallard populations are managed.

"The take home for mallards is that habitat conservation is a bigger regulator of mallard populations, as opposed to harvest regulations," she said. "Harvest regulations are still very important, but we’re still investigating the exact influence of harvest mortality on these populations."

The conference session during which Madeleine presented her research was intended to inspire change to the modeling approach used to make decisions about waterfowl harvest management in the U.S. She did just that.

"Her preliminary results are already impacting waterfowl harvest management decisions at the national level," Thomas Riecke, a University Ph.D. candidate and past recipient of the Bonnycastle Fellowship, said.

Experts from four universities spoke in the session on harvest, and Madeleine was one of only two students to address the session, although there were a number of student presenters in other sessions across the conference. But Madeleine's presentation was not the only time conference attendees heard about her and her research.

Benjamin S. Sedinger presented the talk "Cross-seasonal models reveal evidence for density-dependence, climate-mediated survival and harvest compensation in mallards." His talk was based on research to which Madeleine contributed.

This research was on how hunting affects mallard populations. It found that both North American male and female mallards seasonally compensate for hunting, and that hunting positively affects mallard abundance. It also found that mallards die natural deaths due to climate in both the summer and the winter.

A few feathers in her cap

A prolific student scientist, Madeleine is a graduate research assistant in the Quantitative Ecology Lab, which is led by College of Agriculture, Biotechnology & Natural Resources' Associate Professor Perry J. Williams and supported by the College's Experiment Station.

"Madeleine is driven by an intense desire to positively contribute to the scientific process," Riecke said.

She has journal articles in progress, including a collaborative manuscript co-authored with a post-baccalaureate research assistant in the lab where she works, and she's already a published author.

As an undergraduate, Madeleine was first author on the 2019 Ecology and Evolution paper "Changes in behavior are unable to disrupt a trophic cascade involving a specialist herbivore and its food plant."

"Her results have important implications for understanding the ability of long-lived organisms to alter their behavior in novel habitats," Riecke said. "Moreover, her analyses add to our understanding of black brant population declines on the Yukon-Kuskokwim Delta in western Alaska."

Her second manuscript as an undergraduate explored life-history trade-offs between intra- and inter-annual reproductive allocation and survival rates of adult geese.

"Her results are exciting," Riecke said.

This paper will soon be submitted to The Auk, a premier ornithological journal.

While earning this degree, Madeleine worked as a research assistant in the Sedinger and Matocq Labs, which also operate with Experiment Station support.

In fall, Madeleine will transfer to the University's new Ecology, Evolution & Conservation Biology master's program. The program is a hands-on, highly customizable and interdisciplinary one. It brings together faculty and students from across the University, Desert Research Institute and Great Basin Institute.

Throughout Madeleine's undergraduate and now graduate career, she has been active in the community. She's been involved in several University clubs and organizations, and she's mentored researchers in the lab where she works, students in her College and Honors Program students.

She is also a long-time volunteer with the University's Museum of Natural History, where she helps to offer events for the community and to organize, prepare and maintain specimens.

"As part of her work with the Natural History Museum, she presents topics such as organism morphology, life-history evolution and ecological connectivity to local K-12 students," Riecke said.

Additionally, Madeleine is a science education intern with the local nonprofit organization Nevada Bugs and Butterflies, through which she teaches local students about pollinator ecology.

She's also raised funds for local pollinator gardens and for refugees who have relocated to Reno, and she volunteers to help people who are homeless at the Winter Overflow Homeless Shelter.

"Madeleine donates her time and energy to serve young students, her peers and members of her community in locations as diverse as the museum, pollinator gardens, elementary school classrooms, remote field camps in cold deserts and wetlands, and shelters," Riecke said. "She consistently addresses challenging problems in ecological research, science education and her community with passion, intellect and empathy."