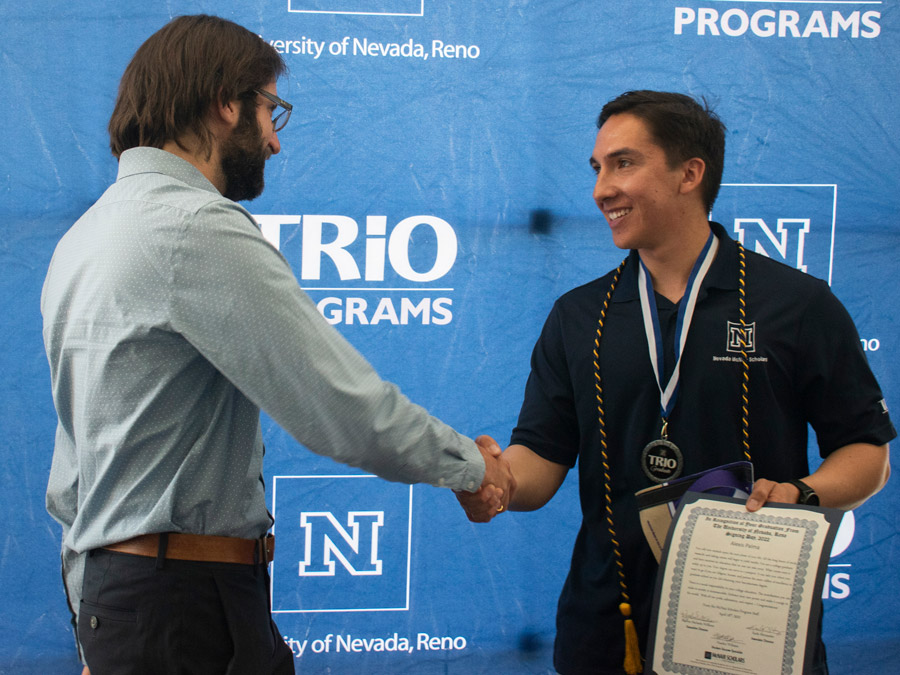 After serving in the military for four years, Palma began his college career at the University of Nevada, Reno. He initially knew little about undergraduate research, but after a teaching assistant of a chemistry course invited him to Christopher Barile’s lab, Palma became fascinated by the projects they were working on, particularly their work on dynamic windows.

“[Research in the lab] changed the trajectory of what I wanted to do after college,” said Palma, biotechnology student in the College of Agriculture, Biotechnology, and Natural Resources. “When I was a freshman, I was thinking I can be the first person in my family to get a degree, but then I felt like ‘oh man, I actually really enjoy research, maybe I can go on and get an even higher degree.’”

So, when he saw an advertisement for the McNair Scholars Program outside the Chemistry Building, he looked into it and felt it was the “perfect scenario” for him. The McNair Scholars Program is designed to prepare undergraduate students from underrepresented groups for doctoral studies through involvement in research and other scholarly activities.

He applied and was accepted into the program, which has helped him learn about how to apply for research funding like the Nevada Undergraduate Research Award (NURA) from Undergraduate Research, part of Research & Innovation, and opportunities through the Established Program to Stimulate Competitive Research (EPSCoR) program. Without these resources, Palma said he doesn’t think he’d be as funded as he is now. On top of that, Palma appreciates the sense of belonging you gain through the program.

“It’s a community essentially,” he said. “It’s the first time I've ever been surrounded by people who are like-minded and have a similar background, because most of the time you're not around people who can understand what it's like to be a first-generation or underrepresented student.”

The experience Palma gained through being a McNair Scholar and participating in undergraduate research prepared him for applying to the National Science Foundation (NSF) Graduate Research Fellowship Program. This five-year fellowship is highly competitive, and in April, Palma learned that his hard work had paid off—he is one of several students at the University to receive this prestigious award for 2022.

“I still can't wrap my head around it,” he said. “You read the [award] letter, and it mentions ‘placing you among other scientists who have received this award and have gone on to do amazing things.’ Even though I was doing undergraduate research I would never call myself a scientist, but I’m being placed among some of the amazing scientists, so that was really motivating.”

Without undergraduate research, Palma said he would have never applied for this award. Because of his prior experience applying to opportunities like the NURA and the EPSCoR-supported award, the NSF Graduate Research Fellowship Program was “not as daunting,” he said.

Another benefit of undergraduate research is the connections one can make with faculty, students and staff. The mentorship and guidance Palma received from those at the McNair Scholars office, the lab of Christopher Barile­—assistant professor of chemistry in the College of Science—and the office of Undergraduate Research has been invaluable.

In addition to quality mentorship, Palma said being paid to conduct research offered him more flexibility. Because of the many funding opportunities available from Undergraduate Research, McNair Scholars and other internal or external programs, undergraduate researchers can do research without sacrificing financial compensation. In the case of Palma, he no longer had to commute to Incline Village to work in construction, which allowed him more time to focus on his research.

After his graduation in Spring 2022, Palma plans on attending the University of Washington for graduate school and will pursue a degree in materials science and engineering. Research, and the opportunities that came with it, changed what Palma thought was possible, so he recommended other undergraduate students try it for themselves.

“With research, I was able to really experience school at a different level than just going to class and learning. I encourage everyone to give that a shot, because only good can come out of undergraduate research,” he said. “Even if your plans after college don’t involve graduate school, having that experience of being collaborative and innovative will help you in any field that you're trying to go into.”