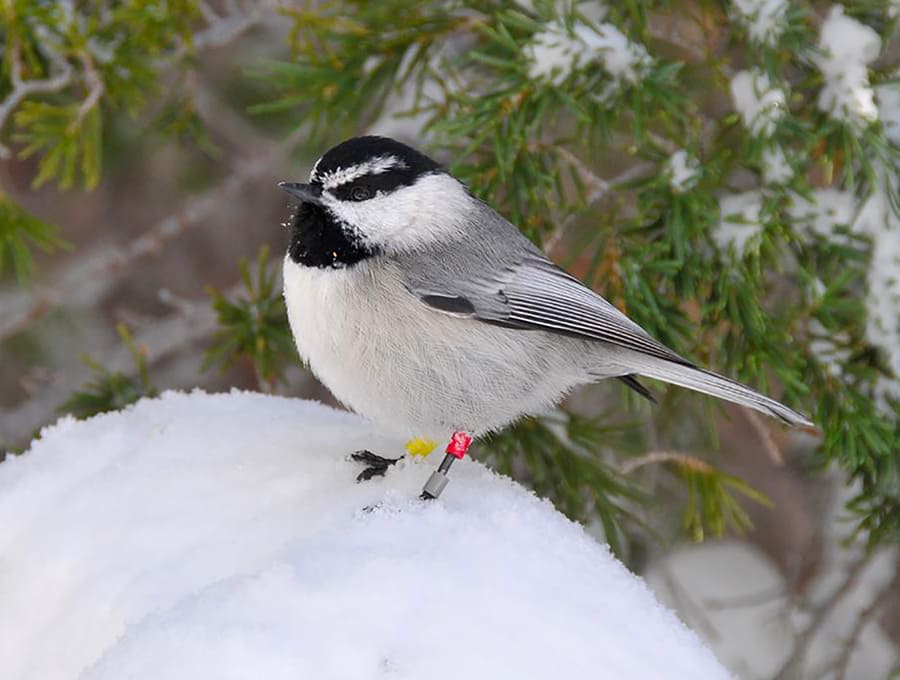 A combination of harsh winters and strong selection on cognitive abilities needed to find thousands of food caches lead to the evolution of specialized spatial cognition in food-caching species such as mountain chickadees, allowing them to resist age-related cognitive declines, according to a University of Nevada, Reno study published in the Proceedings of the Royal Society, Biological Sciences scientific journal.

“We detected no signs of age-related decline in spatial cognitive performance in birds ranging from one to six years old; the older birds actually performed better on spatial learning and memory task,” Vladimir Pravosudov, a senior author on the University study in the College of Science, said. “Our work shows that when cognition is a key element of fitness – in food caching birds if they don’t find their food caches, they will likely not survive the winter – then natural selection on cognitive abilities may result in the evolution of some mechanisms providing ‘protection’ from senescence (age-related decline) or at least such senescence may be greatly delayed.”

As far as the researchers know, this is the first time finding of a lack of age-related cognitive decline in a wild species.

“Of course, it remains possible that such decline occurs later, as chickadees can live up to 10 or so years, but such longevity is rare in wild conditions,” he said. “Most chickadees don’t live past three years and about 50% of chickadees do not survive their first winter.”

Pravosudov’s group study area is set in the wilderness, at the Sagehen Creek Field Station, a dedicated research forest, in the Sierra Nevada mountains north of Truckee with one site at 8,300-foot elevation and one at about 6,200-foot elevation – both sites receive abundant snowfall. Over the years, they’ve banded and tagged thousands of chickadees and measured spatial cognitive abilities in more than a hundred birds of different ages for this study. They have previously found that individuals with better spatial memory are much more likely to survive the winter and the fact that the oldest individuals in this study did the best on cognitive tests suggests that they can also live longer.

“Annual mortality in chickadees is around 50%, but in adults, who survived their first winter of life, annual mortality is lower because only birds with best cognitive abilities survive their first winter,” he said. “The oldest chickadee we detected in our study was about 10 years old, but most individuals are less than 3 years old, only a fraction of birds live past 3 years.”

The authors predicted that age should have either no effect on spatial cognition, or that signs of cognitive decline would appear only in the oldest individuals, so were not too surprised at the results.

“It is hard to predict if we would see a cognitive decline in chickadees older than 6 years old – it is possible, but I would think that they maintain their cognition for longer,” Pravosudov said. “I would think that if we have 10-year-old chickadees still alive and breeding, they likely still have excellent spatial cognition – otherwise they would not survive this long. Of course, this is just a speculation, and we really don’t know what is the maximum possible life span in chickadees. So, it is possible that cognition would start declining at some old age – but it would also mean that these birds would likely not survive past that age in the wild.”

Pravosudov’s team, lead by Virginia Heinen, a postdoctoral researcher, used a spatial learning and a memory task that is associated with food caching, cache retrieval and survival, and a reversal spatial learning task that is reflective of spatial cognitive flexibility, allowing animals to track rapidly changing spatial information.

Pravosudov, a long-time professor in the Department of Biology at the University of Nevada, Reno, has been interested in and spent more than 30 years studying food-caching species of chickadee family (Parids) including mountain chickadees in both Eurasia and the United States.

“What makes these birds very interesting is that they live in rather harsh environment in the mountains, and they are highly sedentary – they spend their entire life in the same locations,” he said. “One of the main adaptations to this lifestyle is food caching – mountain chickadees may cache tens of thousands food items every fall and will use these food caches throughout the winter to survive.”

Pravosudov and his team of three graduate students and a postdoctoral researcher visit the site at the University of California, Berkeley Sagehen Creek Field Station several days each week year-round in some of the harshest Sierra Nevada winter weather. The field lab is about 40 miles from the campus in Reno, so traveling during snowstorms is slow, and then they use over snow vehicles to go the last 10 miles, often blazing a trail through four feet of new snow.

Sometimes they have to cross-country ski to get to the sites because their oversnow vehicles cannot get through the deep snow, they have two atvs with tracks and two snowmobiles. A YouTube video produced by the College of Science shows the mountain study site in winter.

Virginia Heinen, Pravosudov’s National Science Foundation-funded postdoctoral researcher, is the first author of the paper that was published March 31, 2021, in the Royal Proceedings. Other authors are Angela Pitera, Benjamin Sonnenberg, Lauren Benedict and Carrie Branch, all graduate students from the University’s Ecology, Evolution and Conservation Biology interdisciplinary program. Eli Bridge, a collaborator from the University of Oklahoma, is also a co-author.

Pravosudov is a fellow of the American Ornithological Society, recognized for his “exceptional and sustained contributions to ornithology,” and is a fellow of the Animal Behavior Society. His work with birds has embraced cutting edge technology and helped foster new understanding of the evolution of cognition.