A promising breakthrough against a deadly foe: Streptococcus pneumoniae 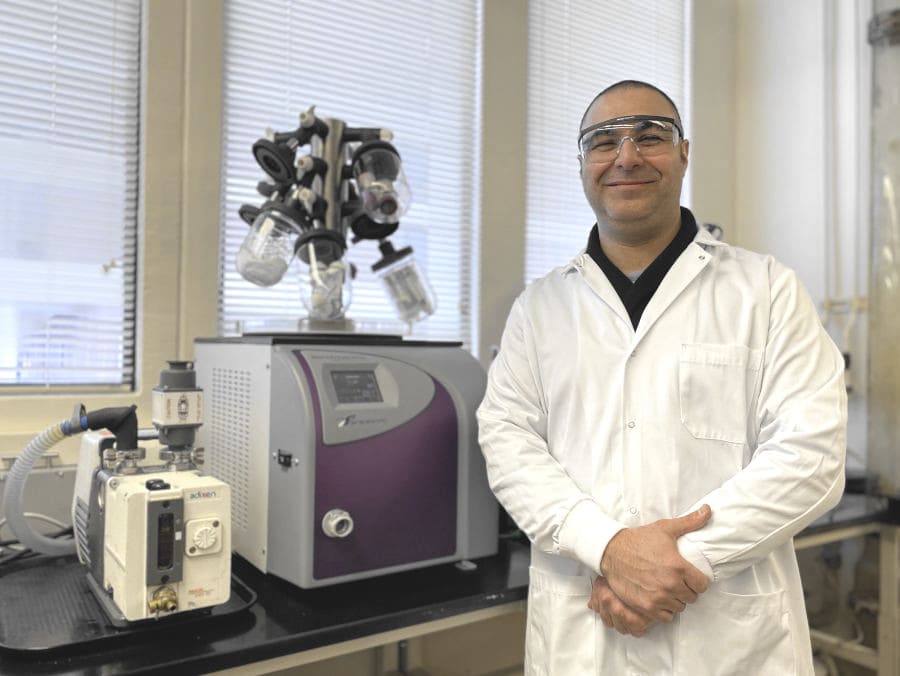 A promising breakthrough against a deadly foe: Streptococcus pneumoniae

When engaged in battle, a key tactic for defeating your enemies is disrupting their communication.

In the battle against deadly diseases that adapt quickly to resist today’s top antibiotics, researchers from the University of Nevada, Reno’s College of Science have shown that stopping bacterial cells from communicating can actually prevent them from amassing their lethal armies.

An article published this month in the prestigious Proceedings of the National Academy of Sciences details the potentially game-changing research of University chemical biologist Yftah Tal-Gan and his team. Their breakthrough research studied “quorum-sensing” bacteria that synchronize the activities of large groups of cells by communicating via chemical signal molecules.

Streptococcus pneumoniae attacks compromised or undeveloped immune systems, making the elderly and children especially vulnerable. It is blamed for over 22,000 deaths, 400,000 hospitalizations and $3.5 billion in health care costs annually in the United States alone – and an estimated 800,000 deaths globally among children age 5 and under.

“People don’t realize it, but bacteria are smart – they communicate, they adapt,” Tal-Gan said. “The big issue today is that  Strep pneumoniae builds up resistance to drugs, making them stronger and rendering the antimicrobials ineffective. Through our research we have synthesized peptides (chains of amino acids) in a way that interrupts the bacteria’s communication, keeping them from rallying their harmful forces and from initiating resistance to drug therapies.”

In other words, not only do bacteria communicate, they use the buddy system.

“It makes sense that if you get a scratch, you’ll have a few bacteria in your blood stream,” Tal-Gan explained. “Your strong immune system is going to kill them in a second. So instead, the bacteria are going to hide and build their army. It’s only when they reach critical mass (a “quorum”), when they know they have the numbers, that they begin synchronizing all together to start producing virulence (disease-producing) factors to overwhelm the immune system and establish an infection.”

“Quorum-sensing” refers to the cell-to-cell communication that the bacteria use to rally their forces and stage the attack on the human host.

By exploiting this mechanism, Tal-Gan’s team has demonstrated that it is possible to moderate or eliminate the bacteria’s disease-producing capability without killing them, preventing the unintended-but-certain resistances the world is grappling with today.

Antibiotics over the years have become less and less effective against Streptococcus pneumoniae bacteria, which are adept at developing drug resistance. According to Tal-Gan, pharmaceutical companies have essentially stopped making large-scale investments in developing and manufacturing powerful new antibiotics if they are prone to quickly being rendered ineffective before providing a worthwhile return on investment. What’s missing from today’s disease-fighting toolbox are other solutions to fighting Streptococcus pneumoniae. “Quorum-sensing” therapies present a path to promising possibilities.

“Antibiotics kill bacteria, wiping out billions of them while the surviving bacteria propagate, creating drug-resistant strains,” Tal-Gan said. “With quorum-sensing, you’re not killing the bacteria, you’re just intercepting their communication so they’re not attacking the host, the human.”

Progress, then a breakthrough: ‘This can be big’

There are two deadly strains of Streptococcus pneumoniae. The researchers were able to synthesize peptides that initially achieved the desired, neutralizing effects on one or the other, but not both. While these milestones demonstrated the sound scientific potential of this approach, the team knew that developing a peptide shown to be effective on both strains was the only sustainable and acceptable outcome.

Then, recently, after additional months of testing using robotic, automated batch sampling and other testing on slightly modified peptide configurations, the team synthesized a peptide that disrupted the bacteria’s communication for both strains – the breakthrough they’d been looking for.

Tal-Gan recalls that day: “We got the results. There was a moment of, ‘This can be big. We need to move on this quickly.’” The team’s collaborating colleagues at the University of Illinois at Urbana-Champagne were instrumental throughout the research process and in validating the result by successfully testing Tal-Gan’s newly developed peptides on laboratory mice. The breakthrough was confirmed.

‘Fell in love with bacterial communication’

A peptide chemist by training, Tal-Gan’s early interest in biology and chemistry eventually led to his ultimate passion. “I fell in love with bacterial communication, and that was it. I never looked back,” Tal-Gan said. “It’s just fascinating, so cool.”

Tal-Gan joined the University’s College of Science in 2014, where he currently serves as an assistant professor. He received his bachelor’s and master’s degrees, MBA and Ph.D from the Hebrew University of Jerusalem and was a postdoctoral research associate at the University of Wisconsin-Madison before coming to Nevada.

Tal-Gan cites the Bobtail squid, whose bacterial synergy was first studied in the 1970s, to illustrate the concept of quorum sensing. The tiny squid have internal compartments, where they grow a high number of Vibrio fischeri bacteria. When the bacteria reach critical mass, they emit light. The squid’s physiology adjusts the amount of light emitted to illuminate its shallow-water feeding ground while also canceling out its own shadow for protection from predators – based on the amount of moonlight and starlight taken in through its sensors.

Just as the bacteria in the Bobtail squid communicate to obtain critical mass to create light, Streptococcus pneumoniae bacteria cause disease to occur in humans by sending chemical signals that activate a critical mass – its quorum – of bacterial cells.

The first five years of research by Tal-Gan’s team was funded by a bridge INBRE grant (IDeA Networks of Biomedical Research Excellence) from the National Institute of General Medical Science and a $1.8 million NIH R35 grant to the Tal-Gan lab.

This past April, Tal-Gan and Lau jointly secured a $2 million National Institutes of Health (NIH) grant (National Heart, Lung and Blood Institute R01 grant) to provide up to four years to further develop and test the synthesized peptides. The team has filed for a patent, is publishing research findings and seeking funding and partners to optimize the molecules further and develop treatment strategies, including new pharmaceuticals to improve the desired therapeutic effects.

Supported by the recent funding, the team has begun researching the new synthesized peptides to explore avenues for deploying them as a therapeutic strategy, as a standalone or in combination with antibiotics or vaccines. That research is in its early stages, yet the science behind it is now proven to have merit and the next phase of research could elevate Tal-Gan’s team’s breakthrough to even higher levels.

The research of Tal-Gan and his team could have a profound impact on the way diseases like Streptococcus pneumoniae are treated, or even prevented, in the future. With so many lives in the balance, the potential benefits and value of the team’s research is incalculable.

“Like so much of what we do in the College of Science at the University of Nevada, Reno, the research of professor Tal-Gan and his entire team is high-value, high-impact science,” Jeff Thompson, the college’s dean, said. “Breakthrough discoveries like this don’t just happen. It takes resources, vision and a collaboration of smart people persisting daily to solve the world’s most critical challenges.”