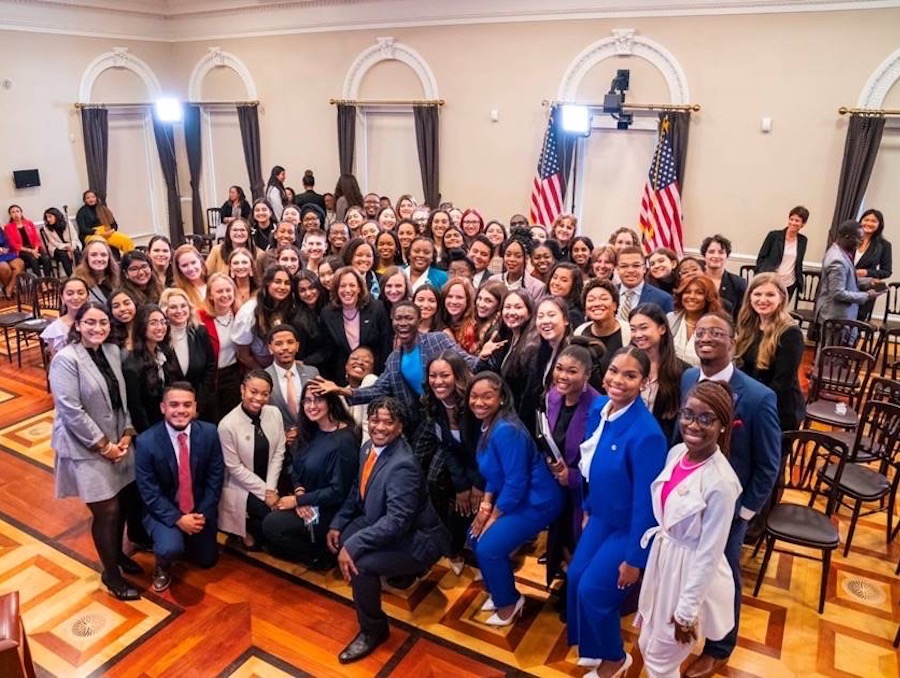 This fall, first-year University of Nevada, Reno student Asma Baloch and 74 other student leaders from universities across the country received the opportunity to visit Washington, D.C. The trip, which was convened by United States Vice President Kamala Harris, included a meeting about reproductive rights at the American Council of Education building and a tour of the White House.

Baloch was nominated to travel to the U.S. capitol thanks to support from The Multicultural Center and the Associated Students of the University of Nevada’s Diversity and Inclusion Department.

“I got an email around August saying that I was nominated by a member of the student government, and it said that I had an opportunity to go to the White House. It said to just send a biography and the reason why I think I would be good for this role,” Baloch said.

In her application, Baloch focused on her participation as the membership chair of the University’s Planned Parenthood Club. The main goal of the club is to work toward real, not performative, activism related to reproductive rights, which helped Baloch’s application stand out.

“The first part of the itinerary was going to the American Council of Education building where we all talked about our reasons for doing this. Everyone shared their stories about why they’re so proactive with reproductive rights,” Baloch said. “A lot of these stories were actually very personal, and it really did change my perspective on different opinions because it really defines what it means to be pro-choice.”

Baloch expressed the intimacy of the group’s experiences and how hearing other people’s stories not only helped put into perspective the need for reproductive rights but also reaffirmed the understanding that women’s rights are currently in danger.

“We were taken into separate breakout rooms because we had a limited time with the Vice President [Kamala Harris], but we were able to talk about specific issues we see about reproductive health in America,” she said. “One thing I spoke about was sex education and how abstinence is taught instead of safety and protection.”

After Baloch’s trip to Washington, D.C., she connected with the University Planned Parenthood club president about ways to be more proactive both in the University and Reno-Sparks communities.

“Right now, we’re trying to find more ways to be more proactive in our communities, so we’re focusing on education and outreach. Our club specifically gives support to women in the college community,” she said. “We had an event on December 1 about donations towards the American Civil Liberties Union because we’ve realized we need to do more outreach.”

Baloch’s favorite experiences from her trip were getting to sit and talk with people who were also invested in protecting reproductive rights and learning more from them about career paths that she might be interested in.

“My main highlight from this experience wasn’t the White House itself but the people involved in Planned Parenthood action,” she said. “It not only ignited my passion, but it also showed me how many options I have. I was trying to choose between pre-med or law, and everyone helped me to realize that I can do something like medical policy and integrate all my passions into one career.”