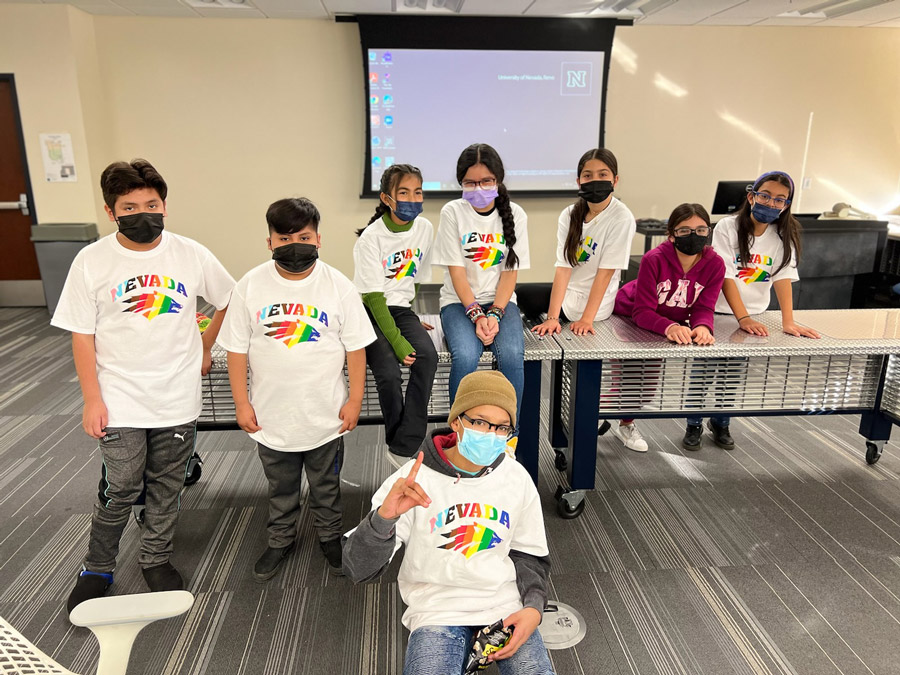 The success of the College of Education & Human Development’s Center for Learning and Literacy robotics program is evidenced through the Wolf Pack Bots, a young team that regularly prepares for and competes in First LEGO League competitions. This record of success continued at the Northern Nevada Championship on January 22, 2022, where Wolf Pack Bots won the Innovation Award for their robot’s design, as well as the Nevada First LEGO League Global Innovation Award Nomination.

Rachel Salas, director for the Center of Learning and Literacy, coaches and leads this program with the help of University of Nevada, Reno graduate and undergraduate students. Salas hopes to make a positive impact on the children, many of whom have been recruited from the Center’s literacy tutoring program. By building robots with LEGO pieces, the children learn STEM, robotics and language concepts, while also gaining confidence in themselves.

“My goal is to create confident kids who believe in themselves and have that worldview of ‘the sky’s the limit: I can do this,’ whether a girl or a boy, whether they have a disability, a speech impediment, or have been labeled as an English learner at school. That’s an empowerment, the way I see it,” she said.

Strong mentorship from Salas and hard work from the team members continues to pay off as the Wolf Pack Bots participate in annual competitions. At the First LEGO League Northern Nevada qualifier on December 18, 2021, the group won the Robot Performance Award and the all-around Champion’s Award. These victories allowed them to advance to the Northern Nevada Championship, where their work further qualified them to next advance to the FIRST LEGO League Global Innovation Award event.

This year’s theme for the First LEGO League season is “Cargo Connect,” encouraging students to learn about modern transportation and how cargo is “transported, sorted, and delivered to its destinations.” The Wolf Pack Bots were tasked with designing and programming a robot that can accomplish missions, related to this theme, using a provided game mat with LEGO pieces.

Through research and interviews with experts, including guidance from David Feil-Seifer’s robotics lab in the University’s Computer Science & Engineering, the team designed a robotic arm that assists farmworkers with picking berries. Their goal was to alleviate the physical labor strain in a way that works alongside the worker so they do not lose their jobs. Their award-winning robot design was inspired by an illustration by Los Angeles Times Lalo Alcaraz, which depicts farmworkers as important and necessary human infrastructure that enables the transportation of food and other goods. “As a predominately Latinx team this picture really hit home for the Wolf Pack Bots,” Salas said.

Along with the support of the College of Education & Human Development, Wolf Pack Bots has also benefited from the help of the University’s Innevation Center. When the team could no longer meet at the William J. Raggio building on campus due to COVID-19 restrictions, the Innevation Center offered space to the group so they could keep preparing for competitions.

To learn more about the Wolf Pack Bots program, visit the Center for Learning and Literacy website.