The STEM Sisters is a program associate biology professor Jamie Voyles started to encourage girls to explore the possibility of a STEM career. 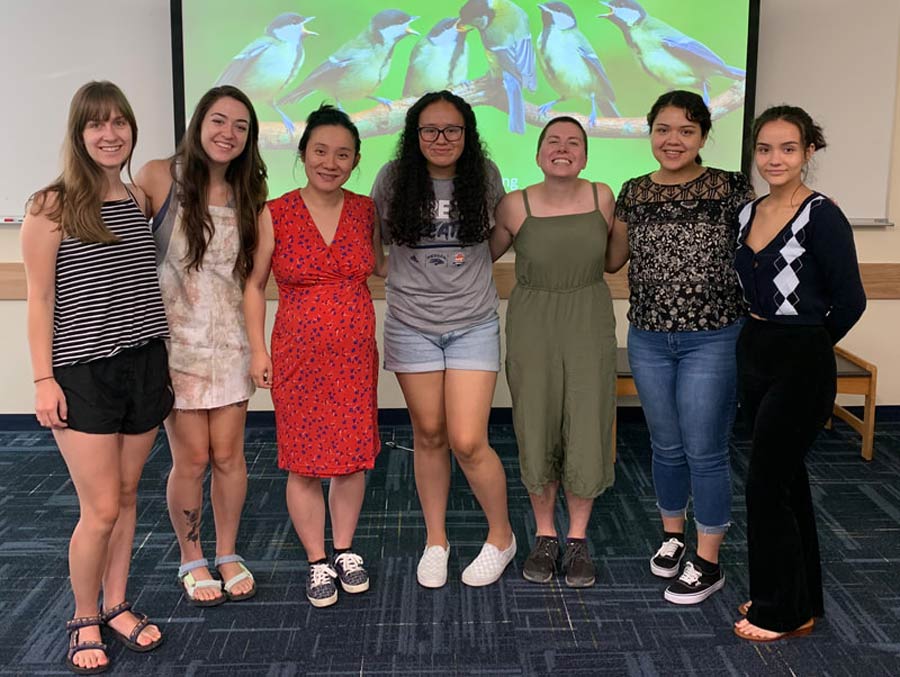 The STEM Sisters is a program associate biology professor Jamie Voyles started to encourage girls to explore the possibility of a STEM career.

Students from local high schools and one undergraduate student were given the opportunity to participate in independent research at the University this past summer as part of the STEM Sisters program. STEM Sisters was a six-week program that paid students to do research at the college level which they presented at a University symposium as well as an international meeting that was held virtually. Jamie Voyles, associate professor of biology, started STEM Sisters with funding from her National Science Foundation (NSF) CAREER Award with the goal of providing high-level research experiences to local young women from backgrounds traditionally underrepresented in the sciences.

“NSF CAREER Awards, by design, have heavy research and education components. They really encourage innovation in education and marrying the research and education components. I conceived of STEM Sisters as I was writing this grant,” Voyles said. “It was originally supposed to happen where I do my field research in Panama, but due to COVID-19, I decided to have it be local and recruit local women from underrepresented communities.”

Voyles studies frogs and disease, and recently became the co-director of the Resilience Institute Bridging Biological Training and Research that will examine how frogs’ ability to survive infections can inform disease resilience in humans. The students did research on how body temperatures impact growth of microbes on frogs.

Jennifer Rodriguez attends Wooster High School. Her favorite parts about the camp were learning how to use the equipment and the guest speakers that were a weekly occasion for the camp. “The camp was able to teach me things I would not typically be able to learn in a school setting, such as how to handle lab equipment, and apply my conclusions from my experiment to the world,” Rodriguez said.

“All the science they were doing was totally self-driven. They collected their own data, did their own analyses, and wrote it up for a poster for a symposium and an international meeting,” Voyles said. The meeting was held virtually due to the ongoing pandemic.

Jordan Gass was one of the graduate student mentors. She said her favorite part was watching the girls gain confidence in the lab. “When they start they are so unsure of themselves and of their abilities, and by the end they are comfortable performing scientific techniques, which then makes them more comfortable asking bigger and more exciting questions.”

Ciara Sheets, another graduate student, said the most rewarding part was showing the students that scientists are real people, and “showing them what science is, while also letting them get to know us as people that they can relate to and feel connected with.”

“I was raised by parents who were really enthusiastic about my interest in science and wanted to provide as many role models as possible when I was young so we would know that science is cool and fun,” said Voyles. “I think young women don’t get enough of that. STEM can be so intimidating, but science is an inherently creative process so it’s actually really fun.”

“I think that being able to see yourself doing a job in science from a young age is crucial to actually pursuing that job. Interactive science programs help ‘pull back the curtain’ for what a scientist is and allow young women to gain the confidence to dream about and pursue scientific careers,” said Gass.

Voyles plans to apply for additional funding to support another cohort of students, who she hopes to bring to Panama, where much of her research takes place. The first cohort was supposed to be in Panama, but that was disrupted by the COVID-19 pandemic. Voyles hopes the next cohort will be able to do the same program in Panama, with the original cohort serving as mentors for the new students. The students who participated last summer have maintained a working relationship with Voyles’s lab.

"What I got from this program is irreplaceable and truly one of a kind."

Ruby Pacheco, another Wooster student, said she was worried starting the program that she wasn’t competent, but the supportive and collaborative environment motivated her to keep going, even as the work got harder. She also enjoyed the connections she made with the mentors and other mentees in the program.

“Especially in more male-dominated fields such as science, it was refreshing to see other women who are dedicated and talented each in their own way. Additionally, the Voyles lab makes it clear about their value of diversity and inclusion and it definitely can be portrayed through the guidance of Jamie and the grad students as well. I have the utmost admiration for each and every person in the Voyles lab and thank them for giving me such an amazing experience. What I got from this program is irreplaceable and truly one of a kind. I encourage others that might have worries about going into the sciences, to give it a chance,” Pacheco said.

“I can’t say enough about how amazing these ladies are. They undertook the whole thing, had the courage to try it, took a deep dive into the scientific process and were so determined. It blew me away,” said Voyles.