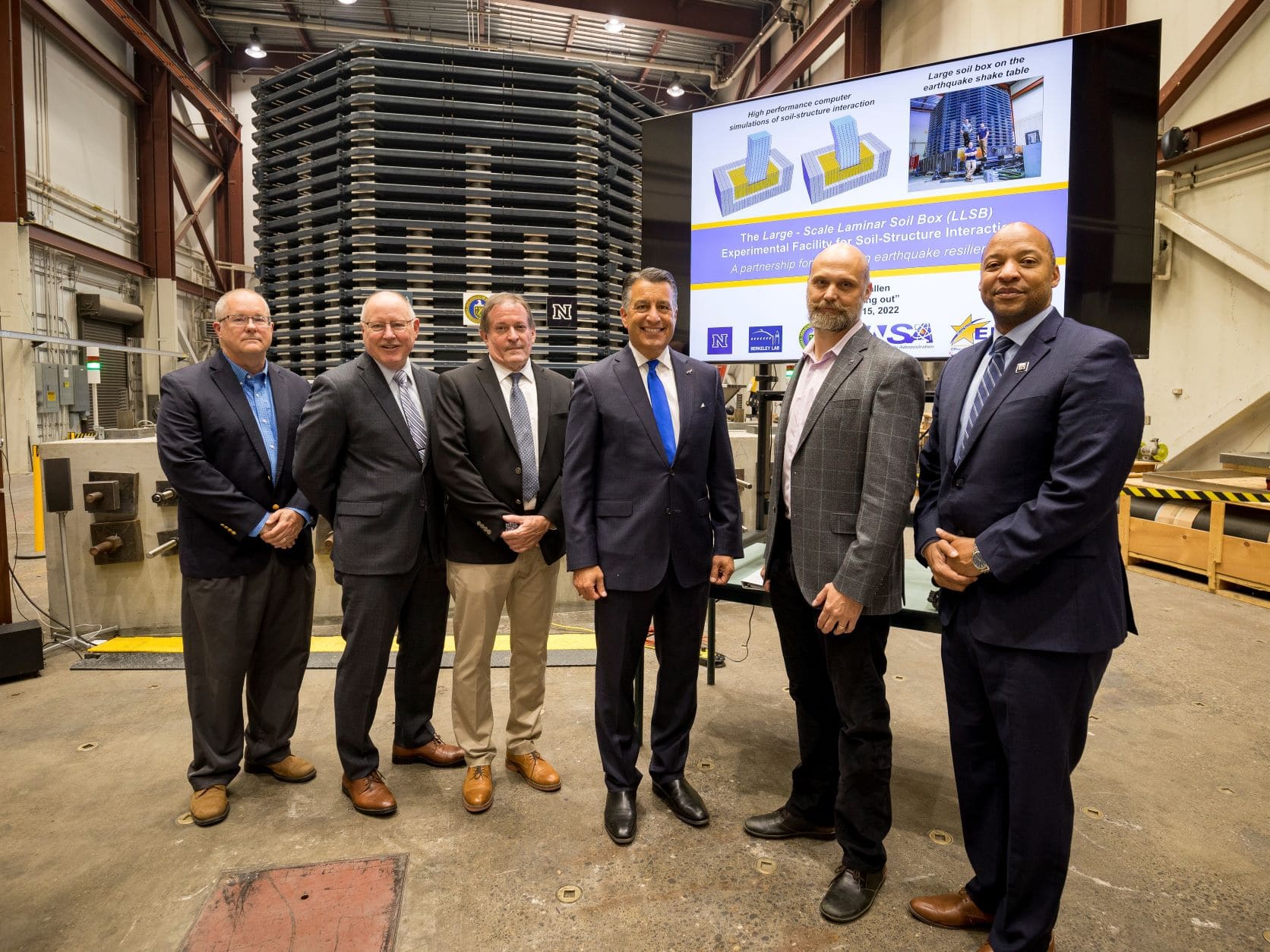 To make sure buildings and infrastructure are increasingly earthquake-safe, engineers must understand how seismic activity affects different structures. A new era in large-scale earthquake engineering testing is ushered in with the completion of the massive, innovative Large-Scale Laminar Soil Box System, part of the University of Nevada, Reno’s world-renowned earthquake engineering complex. It provides an unprecedented and innovative experimental facility for evaluating the complex manner in which structural systems like buildings and bridges interact with the surrounding soil during an earthquake.

The Soil Box System – the largest in the U.S. and comparable in size to the largest one in the world – is a collaboration with Lawrence Berkeley National Laboratory, and its design and construction were supported by the U.S. Department of Energy. Studies conducted with the Soil Box System will provide data for another effort, EQSIM: an ongoing collaboration between scientists at Berkeley Lab, Lawrence Livermore National Laboratory and the University of Nevada, Reno to develop realistic, highly detailed earthquake simulations using DOE’s supercomputers.

The collaborators celebrated the completion of construction of the Soil Box System on Sept. 15, 2022, with a demonstration of the 24-foot square, 25-foot tall integrated shake table and soil box that has the capacity to hold 350 tons of soil, plus a structure on top, when experiments are conducted.

The system was designed, engineered and constructed by faculty and technicians of the University’s Center for Civil Engineering Earthquake Research, with the support of area contractors and manufacturers.

“This project is an important step in modeling what to expect from earthquakes when designing and building structures,” said David McCallen, project leader and director of the University’s Center for Civil Earthquake Engineering Research, part of the College of Engineering, and a senior scientist in Berkeley Lab’s Earth and Environmental Sciences Area. “It’s a testament to the leadership of DOE in earthquake safety and their investment. Ultimately this effort will develop a more accurate and realistic understanding of earthquake soil-structure interaction phenomena, and provide for better quantification of the safety margins against earthquake-induced failure of critical facilities.”

The two projects funded by the DOE seek to fill in the gaps and provide resources for researchers and engineers to study earthquakes across scales, from the initiation of seismic waves propagating outward from the earthquake fault, to the interactions between shaking soil and individual buildings.

“These projects are synergistic,” said McCallen. “The Soil Box System is helping us understand and refine how we model the complex interaction between the soil and a structure. Our objective is to make realistic models of specific interactions – for example, what happens to a 20-story building very near California’s Hayward fault during a large-magnitude earthquake? – and add them to our existing large-scale simulations. We want to model all the way from the fault rupture through the ground to the structure to see how buildings and other infrastructure in an entire region will respond.”

The Soil Box System project was launched in 2015 out of a need to safeguard Department of Energy buildings that hold sensitive scientific instruments against any potential earthquake scenario. “It was driven by how little we knew about the way soil surrounding the foundation of a building affects its performance during an earthquake,” said Soil Box principal investigator Ian Buckle, a Foundation professor in the University’s Department of Civil & Environmental Engineering.

“For buildings on shallow foundations, there’s probably not much effect. But for those with deeper foundations, such as nuclear facilities and long-span bridges, the answer is perhaps a great deal,” Buckle said.

The design team, led by Buckle and faculty members Sherif Elfass and Patrick Laplace, devised and fabricated the system to have the largest possible soil container, so that representative structures could be placed on top. Other team members on this challenging project were Professor Raj Siddharthan, Associate Professor Ramin Motamed and technicians Chad Lyttle and Todd Lyttle.

The 15-foot-high, 21.5-foot-wide box sits on a 24-foot square shaking platform controlled by eight hydraulic actuators used to generate horizontal motions. The soil container has 19 layers, called laminates, that are each supported on bespoke elastomeric (rubber-like) bearings so that soil layers can move relative to each other like soil does during actual earthquakes. The system can displace and accelerate 350 tons of soil in two directions simultaneously with the same force as a strong earthquake, and is so powerful that the designers had to build in safeguards to prevent it from destroying itself during experiments. The hydraulics are controlled by custom software and the box is equipped with a suite of sensors so that the scientists can gather detailed datasets to feed into their computer simulations. The Soil Box System is located in the Rogers-Weiner Large-Scale Structures Laboratory, a 10,000-square-foot high-bay lab with a 35-foot ceiling.

“A soil box and shake table of this size and complexity are not something you order from an online catalog. There are very few organizations or companies with the knowledge and expertise to do this, so we decided to do it ourselves with our own expertise and resources,” said Buckle. “This design not only allows us to work with large-scale structural models that can be placed on top of the soil, but also the large-scale allows more realistic soil properties to be modeled.”

Once operational, the facility will become a resource for DOE researchers focused on seismic safety as well as scientists across academia and industry. James McConnell, associate principal deputy administrator for DOE’s National Nuclear Security Administration, said: “It’s important for DOE and NNSA to invest in this work to ensure that the large, complicated, one-of-a-kind facilities we build are designed to protect the country’s research, defense, and energy-generation needs, but the findings have an added benefit of helping engineers and architects in industry and the private sector build a wide range of earthquake-resilient structures.”

A new generation of supercomputing

Current models of earthquake properties rely on approximations and simplifications due, in part, to the lack of real-world data on the fundamental physics involved, but also because very few computers on the planet are actually capable of running earthquake simulations at the fidelity required to perform infrastructure damage assessments.

McCallen and his EQSIM colleagues have been using the Summit supercomputer at Oak Ridge National Laboratory and the Perlmutter supercomputer at Berkeley Lab to develop very large, detailed models – like their simulations of the San Francisco Bay Area for M7 Hayward fault earthquakes – which has 391 billion model grid points. They will also soon start working on an even more capable platform – the newly launched Frontier supercomputer, also at Oak Ridge. Frontier is the first computer system to break the exascale barrier, meaning that it is capable of calculating at least a billion billion (also known as a quintillion, or 1018) operations per second, and is currently ranked as the world’s most powerful supercomputer.

Using these exceptionally fast machines, the team will be able to add new insight and information on soil response and soil-structure interaction gained from the Soil Box System experiments into their existing large-scale models. The longstanding goal of rupture-to-structure modeling is now becoming a computational reality. Their simulations will then be made available to the public through the Pacific Earthquake Engineering Research (PEER) Center’s open-access database of simulations. PEER is a multi-institution research center focused on performance-based earthquake engineering, led by UC Berkeley.

“Part of our plan is to be able to enhance the available data sets of measured earthquake motions with our very dense, very detailed simulated motions and make these motions available to the broad earthquake science and engineering communities,” McCallen said. “And so we will collaborate with PEER, which has a long history and necessary infrastructure for providing open access to recorded earthquake ground motion records so that they can share them freely with the entire community to the benefit of all. Because not everybody has the power of a Frontier supercomputer sitting on their desk.”

“With this new collaboration with Berkeley Lab, we continue to lead in the area of seismic inquiry, and the safety and resiliency of infrastructures,” College of Engineering Dean Erick Jones said. “Together, our work will inform the DOE’s interests in facility safety, but the Laminar Soil Box also will be available to a broad spectrum of earthquake safety stakeholders. This corresponds to the University’s mission as a land-grant university to better humanity through education, research and outreach.”

The University of Nevada, Reno’s internationally renowned earthquake engineering complex conducts research, testing and analysis for new designs and materials for large structures, ultimately helping make buildings, bridges and highways safer. This Soil Box System adds to the complex’s capacity of four large-scale shake tables with 30,000 square feet of space for experiments. This College of Engineering program helps agencies and industry be successful in their product and infrastructure development, while providing exceptional educational opportunities for students and workforce development. The complex comprises the largest and most versatile large-scale structures earthquake/seismic simulation facility in the U.S.

The Soil Box project has been supported by the DOE’s Office of Environment, Health, Safety and Security’s Nuclear Safety Research and Development Program, and the National Nuclear Security Administration. The EQSIM is an application development project within the DOE Exascale Computing Project.