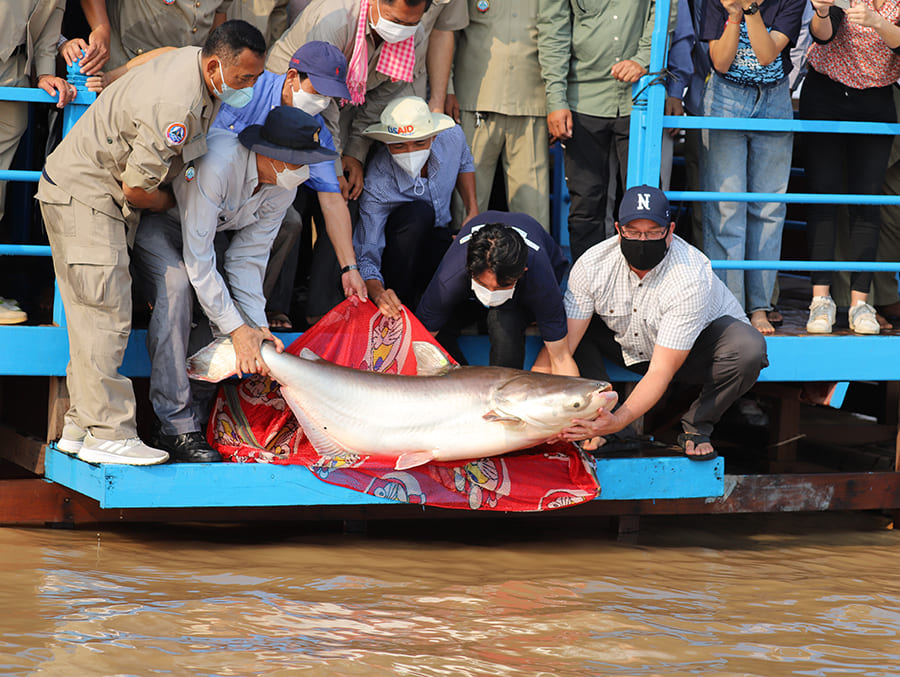 It's the hot season in Cambodia; ideal for releasing some of the world's largest most endangered freshwater fish into the Tonle Sap lake, the largest freshwater lake in Southeast Asia and one of the richest inland fishing grounds in the world.

"Out in the middle of the lake, you can barely see land; the sky and the lake blend together and it can be hard to see the horizon," Zeb Hogan, fish biologist from the College of Science's Department of Biology and a member of the University's Global Water Center, said.

Working to save some of the world’s most critically endangered fish, an international team of scientists and fisheries professionals led by Hogan released as many as 1,500 of several iconic fish species into a fish reserve in the Tonle Sap, Southeast Asia's Great Lake, which is connected to the Mekong River.

“This is the first step in an effort to restore populations of the Mekong’s largest freshwater fishes," Hogan, who works cooperatively with the United States Agency for International Development to lead the Wonders of the Mekong project, said. "Fish reserves have been shown to be an effective tool at protecting aquatic biodiversity and boosting fish biomass. It’s one action, of many that are needed, to bring these species back from the brink of extinction."

The Wonders of the Mekong project is an 8-year project funded by the United States Agency for International Development, focusing on water and biodiversity issues to protect the fishery.

"We've had a great few days here out on the Tonle Sap Lake with a very successful fish release and research project," he said. "We were reintroducing endangered species into the wild. The fish were collected by Fisheries Administration one of our partners in the project."

Among the fish species released over the weekend of March 5-6 are the critically endangered Mekong giant catfish, which is the current world-record holder for the world’s largest freshwater fish at 646 pounds; the endangered striped river catfish, once a staple food in the region, whose population has dramatically declined; and the critically endangered giant barb, the world’s largest carp species and Cambodia’s national fish.

"It's a great project, releasing the world's biggest fish into one of the largest networks of freshwater fish sanctuaries," Hogan said as they prepared for the release. "There are many different sizes of the three species we are releasing, ranging from about 10 inches to a 5-foot long Mekong giant catfish."

The 1,500 fish were released into the government-operated fish reserve, former fishing lot No. 4 in the Tonle Sap Lake, where no fishing is allowed. It's a short drive and boat ride from the city of Siem Reap and the famous ancient temples of Angkor Wat. The fish are mostly juveniles that have been reared by the Cambodian Fisheries Administration in partnership with the USAID supported Wonders of the Mekong cooperative project. By tagging the fish prior to their release, researchers will have a unique opportunity to study the animals’ survival, growth and movement.

“We are trying to determine how many fish will stay in the protected area," Hogan said. "All of the fish were tagged with a unique number – so if they are recaptured we will be able to learn about their survival rate, growth and movements."

The fish were were collected in 2017, 2018, 2019, and 2021, so some were in the hatchery just one year and some as many as four years. The fish were transported by cars and trucks from the Freshwater Aquaculture Research and Development Center in Bati Village where the fish were raised. As the reserve is in the middle of the giant lake, the last stage was by boat.

"The Mekong giant catfish was put inside of a van that was lined with a tarp and filled with water," Hogan said. "So essentially a large tank that was created inside a van. It left southern Cambodia at 8 p.m. and arrived in Siem Reap at 6 a.m. the next morning. It was then kept in an observation pond for 24 hours, then transported by boat to the middle of the Tonle Sap Lake and released."

The fish came from a variety of origins but the one thing that they have in common: they were all collected from the wild when they were very young - in some cases just a few days old.  About half of them were collected by the Wonders of the Mekong project staff as part of a research project on fish spawning/larval fish dispersal. Several hundred were sourced from fishers around the Tonle Sap Lake who also collected them when they are very young and stock them into cages.

“The purpose of this event is to reintroduce captive-reared endangered fishes to the wild and track their fate," Ngor Peng Bun, fish ecologist and Dean of Faculty of Fisheries Science at the Royal University of Agriculture, said. "We need to better understand the effectiveness of fish reserves as a refuge for threatened fish; this release today will inform future conservation practices and help us understand whether such methods are effective in supporting the restoration of these species’ wild populations.”

The Tonle Sap, Southeast Asia’s largest lake and home to more than 300 species of fish, is a hotspot for freshwater biodiversity and a UNESCO Biosphere Reserve. Historically, it has served as a crucial nursery ground for endangered giant fish and for many other migratory fish populations in the Mekong River basin. In recent years, these fish have come under increasing threat from dam building upstream, overfishing and drought.

To combat these threats to fish populations, a series of government-run fish sanctuaries and community conservation areas have been established in the Tonle Sap Lake, forming one of the largest networks of aquatic conservation zones in the world.

“The Cambodian government has taken action to establish fish sanctuaries, protect core areas of the Tonle Sap Biosphere Reserve and formalize community fisheries and associated reserves - these characteristics make Cambodia an ideal place for endangered fish restoration work," H.E. Poum Sotha, Director General of the Cambodian Fisheries Administration, said at the event. "Today is part of a multi-year effort to test the efficacy of using the Tonle Sap’s world’s large network fish reserves for reintroduction of captive-reared endangered fishes into the wild. The ultimate goal is to protect fish until they grow large enough to reproduce, in order to support fisheries and biodiversity.”

This release of endangered species into the Tonle Sap Lake is expected to be the first of many to come, and researchers are optimistic that a sustained commitment to protecting some of the world’s most endangered freshwater giants will bear fruit.

"We have been planning this for four years and it was the first tag-and-release of many to come," Hogan said. "We will conduct another tag-and-release this summer in July or August.

"Assuming the supplementation program is continued in subsequent years, and that favorable habitat and harvest conditions exist to support the full life cycle of these fishes in the wild, this research is part of longer term goals of increased population sizes, natural reproduction, and self-sustaining populations of these rare and remarkable animals.” Hogan added that other actions, such as the protection of migration corridors like the Tonle Sap River and spawning grounds in the upper Cambodian Mekong, are also needed.

Sudeep Chandra, Hogan's research partner, co-principal investigator in the Wonders of the Mekong project and the Director of the University of Nevada, Reno's Global Water Center, said "the efforts undertaken by Wonders of the Mekong, our in-country partners and the local community are a needed step in understanding the importance of fish sanctuaries for sustaining endangered migratory fishes of the Lower Mekong. Ultimately, cooperation and proactive management is needed to sustain the fishery of Southeast Asia’s Great Lake, the Tonle Sap."

"Two recent University of Nevada, Reno graduates are here helping, Elizabeth Everest and Teresa Campbell," Hogan said. "Teresa finished her masters at UNR a few years ago and Eli will be starting in the same program in August. They helped with all stages of the release – transport, tagging, release, data collection, fisher interviews and the recapture program."

Hogan may be best known for his work to find, study, and protect the largest freshwater fish in the world, where his work was chronicled on the National Geographic Channel television series Monster Fish where he was the long-time host. These fish are “megafish”, freshwater giants that live in lakes and rivers, that are more than 200 pounds and six feet long, some reaching 23-feet in length. The show has aired in Europe and Asia as well as the United States. Hogan has filmed in more than 30 countries on six continents.

Hogan has been on faculty at the University since 2006, is an assistant research professor in the University’s College of Science, part of of the Aquatic Ecosystems Analysis Laboratory in the Biology Department and a member of the University’s Global Water Center. He is a National Geographic Explorer and was named a National Geographic Fellow in 2011. He was a visiting Fulbright scholar at the Environmental Risk Assessment Program at Thailand’s Chiang Mai University, has served as a World Wildlife Fund senior freshwater fellow and is the United Nations Convention on Migratory Species Councilor for Fish.