Caterpillar range is correlated with their eating habits

Researchers asked whether caterpillars that aren't picky about what they eat occupy larger habitats. 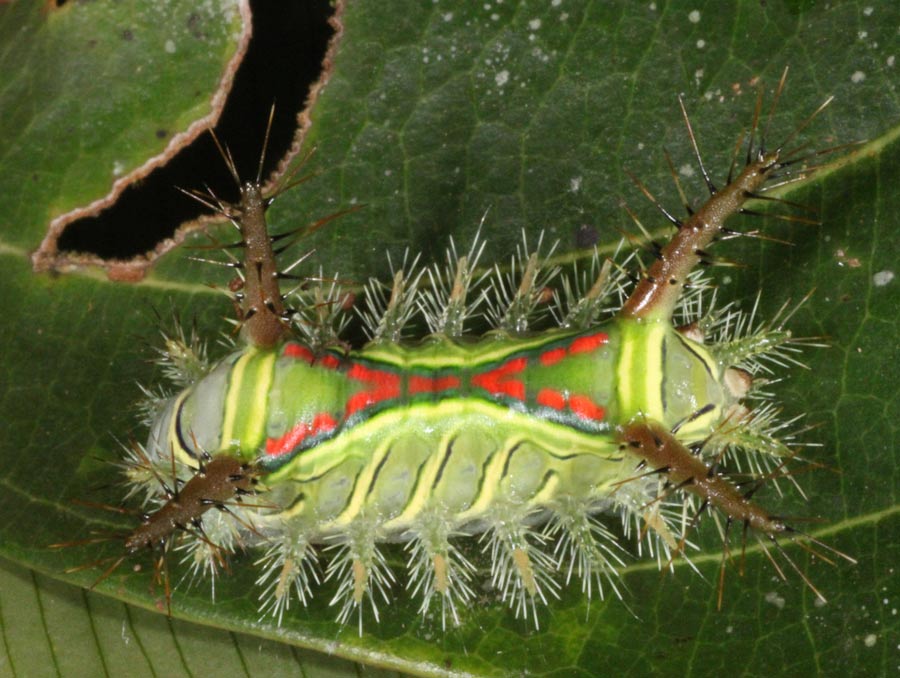 Caterpillar range is correlated with their eating habits

Researchers asked whether caterpillars that aren't picky about what they eat occupy larger habitats.

Chanchanok Sudta hasn’t been to Ecuador yet but she has spent a lot of time thinking about the caterpillars that inhabit the tropical forests there. The Ph.D. candidate in the Ecology, Evolution and Conservation Biology (EECB) program received 18 years’ worth of historical data from her PI, Department of Biology Professor Lee Dyer, and his colleague Matthew Forister, the Trevor J. McMinn Endowed Professor in Biology and Foundation Professor. The researchers wanted to know how a species’ geographic range is affected as they become more specialized in their diet.

The historical data, which included over 1900 species of caterpillars across 33 families, was made up of three levels of observation. The first was a 10-meter-wide plot, where researchers would examine the plants to see which caterpillars were present and consuming plants. The second level was an elevational gradient, which clustered plots within the same elevation band. The research area included the Ecuadorian Andes, where the elevations reached up to 3000 meters.

"In the tropics, so many species are specialized and we still don’t know a lot about them."

“We wanted to see if the pattern was consistent regardless of the elevational band the community occupied,” Sudta said. Finally, at the ecosystem level, the data from each elevational gradient was combined.

“The first time I analyzed the data, I thought, ‘Did I do this correctly?’” Sudta said. “Once I looked through the literature, I found it to be consistent with the classic hypothesis that a “jack of all trades, master of none” won’t be as good as a specialist.”

“Locally, generalists will never be dominant,” said Dyer, who is also the director of the EECB graduate program. “You might find them to be successful but not high density at any given spot.” A recent paper found a similar trend in how eating habits affect the range of birds.

While having 18 years of historical data allows for greater statistical significance, it does pose some challenges.

“There is some variation of how the data has been recorded,” Sudta said. “The data set that was given to me was in Spanish, and I don’t know Spanish. Luckily many people in the lab speak Spanish and we have a Spanish-speaking PI.”

Sudta said the generalists haven’t been spared by the global decline in insect populations, despite having a wider breadth of plants to consume. “Specialists and generalists are at risk,” Sudta said.

While the patterns of their habitats and diet remained consistent, the data confirmed that insect decline is affecting the caterpillars. This doesn’t affect the results too much though, Sudta said, because insect decline is happening across species.

“Small fluctuations will happen anyway,” she said, due to environmental factors such as flooding or deforestation.

Dyer’s research also takes his lab to Costa Rica, where he said insect decline is more noticeable. Though they’re not finding the same rate of decline in Ecuador, there are changes in the habitats the caterpillars occupy. Species that lived at lower elevations are shifting to higher elevations.

Sudta made it clear that the patterns seen with generalists may not be representative of other species due to differences between species. In other types of insects, for example, those that don’t fly may not have as broad of a range, and the trend might be the opposite.

Research that focuses on the geographic patterns of caterpillars can help inform conservation efforts. Insect decline can have serious impacts as moths are very important to the ecosystem. Moths, which includes butterflies, serve as pollinators as adults and as food for predators as caterpillars. The caterpillars also maintain plant diversity by consuming a wide variety of plants.  Without those species, the ecosystem structure could be drastically changed.

“In the tropics, so many species are specialized and we still don’t know a lot about them,” said Sudta. The idea of doing tropical research was what drew Sudta to the University, which she said seemed counterintuitive at first.

“It was a surprise for me to find out that the University, which is in a desert, had a lab where the primary focus is tropical ecology.” Sudta received her undergraduate degree at Claremont College in Southern California and is an international student from Thailand. She said the ability to do research on tropical environments appealed to her because after she completes school, she will be returning to Thailand, which has a tropical environment and will allow her to utilize the skills she learns during her studies.