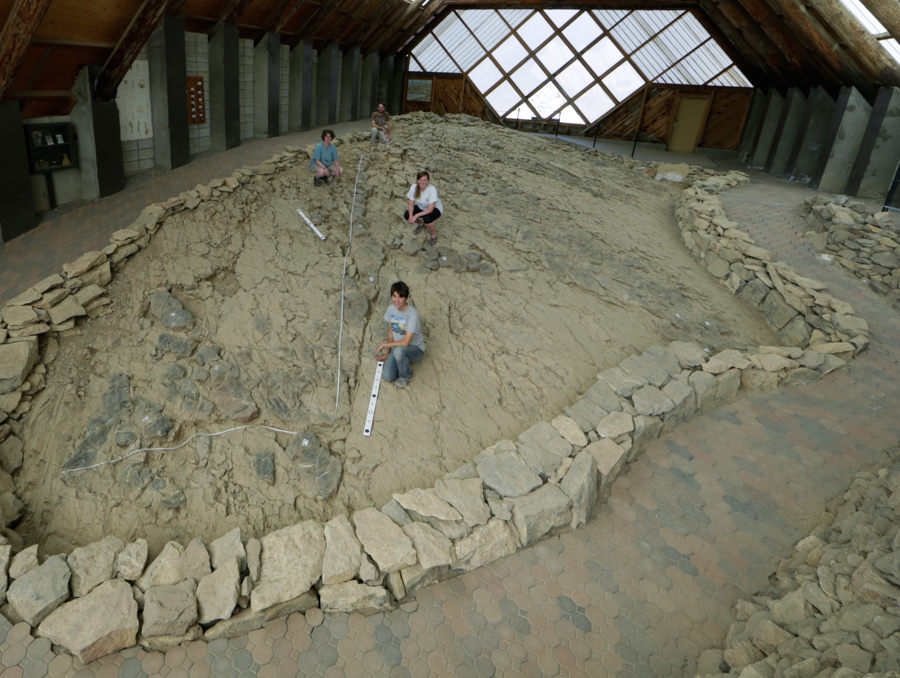 Nearly 40 school-bus-sized marine reptiles lay petrified in stone at Berlin-Ichthyosaur State Park. The fossils have been studied for decades and the story of the ichthyosaur (Shonisaurus popularis) has sparked imaginations in Nevada as the state fossil and even inspired a popular beer made in the state – the Great Basin Brewing Co. Icky IPA. However, the reason so many swam the Triassic Sea over 200 million years ago and came to meet their end in the same locality (what is today the middle of Nevada’s Humboldt Toiyabe National Forest) has eluded researchers until recently. Using newer paleontological techniques such as 3D scanning and geochemistry, researchers have unearthed evidence that shows the animals may have been migrating to breed and give birth together in relative safety. Just as today’s marine giants – the blue and humpback whales – congregate year after year along the same stretches of coastline, researchers believe the ichthyosaur may have been making similar migrations nearly 200 million years before giant whales evolved.

“It's so neat how carefully integrating the geology and fossil record of a site can yield a rich sense of how ancient animals lived. We're getting a window to behavior more than 200 million years in the past.”

The findings, published December 19 and featured on the cover of the journal Current Biology involved collaborations between nine institutions including the Smithsonian Institution and the University of Nevada, Reno's Mackay School of Earth Sciences and Engineering. Paula Noble, professor of geological sciences and engineering, and her former undergraduate student Paige dePolo have been working with lead author Neil Kelley since 2014. Kelley is a Vanderbilt University scientist and former postdoctoral fellow at the Smithsonian’s National Museum of Natural History. DePolo, now pursuing her Ph.D. in vertebrate paleontology at the University of Edinburgh, is a co-author on the paper for the research she began as an undergraduate in Noble’s lab. For dePolo, the research adds a new dimension to these very ancient animals.

“This latest inference about Nevada's ichthyosaurs gives us insight into these organisms as animals fully alive and dynamically inhabiting their environment,” dePolo said. “It's so neat how carefully integrating the geology and fossil record of a site can yield a rich sense of how ancient animals lived. We're getting a window to behavior more than 200 million years in the past.”

The research, conducted over eight years, methodically eliminated many previous theories about the extinction site. The team collected tiny samples of the rock surrounding the fossils and performed a series of geochemical tests. This ruled out theories that these ichthyosaurs perished because of some cataclysm that would have seriously disturbed the ecosystem in which they died, such as a deadly algal bloom. The geologic evidence indicates that when the ichthyosaurs died, their bones eventually sank to the bottom of the sea, rather than along a shoreline shallow enough to suggest stranding, ruling out another hypothesis. Of interest to the researchers was the fact that, though the area’s limestone was chockfull of large adult Shonisaurus specimens, other marine vertebrates were scarce. The research team found a key piece of the puzzle when they discovered tiny ichthyosaur remains among new fossils collected at Berlin-Ichthyosaur State Park and hiding within older museum collections. DePolo spent six months at the Nevada State Museum in Las Vegas organizing and cataloging the ichthyosaur material, at which time she found a rib block with embryo remains as well as an isolated vertebra that was incorrectly labeled as an ammonite.

“When I realized that I'd found parts of the embryo that the team had been trying to find for years at that point, it was such an exciting day,” dePolo said. “I didn't get a lot of cataloging work done that day because I was running around the museum trying to find the curators and exhibits staff and excitedly show them the smear of bones on the block.”

Careful comparison of the bones and teeth using micro-CT X-ray scans at Vanderbilt University revealed that these small bones were in fact embryonic and newborn Shonisaurus.

“Once it became clear that there was nothing for them to eat here, and there were large adult Shonisaurus along with embryos and newborns but no juveniles, we started to seriously consider whether this might have been a birthing ground,” Kelley said.

Further analysis of the various strata in which the different clusters of ichthyosaur bones were found also revealed that the ages of the many fossil beds of the State Park were separated by at least hundreds of thousands of years, if not millions. This further confirmed the new theory and, for dePolo, inspired a new perspective of the species and its relationship to the probable birthing ground.

“When I was younger and through my undergraduate studies at UNR, I thought of Shonisaurus popularis as Nevada's ichthyosaur,” dePolo said. “My mind cruxed the specialness of these animals around them being found in the state I called home. Knowing that Shonisaurus was potentially migratory and that Berlin-Ichthyosaur State Park potentially was a place where the animals could gather in large numbers to give birth, flips the framing for me. It makes the ocean shelf that would eventually become part of Nevada just as special a place for these marine reptiles as it is for me.”

The University has become a recent hub of Ichthyosaur research, led by Noble and her students. In addition to significant contributions to this publication and her mentorship of dePolo, Noble serves as advisor to current graduate student Gary McGaughey who is currently working on a recently discovered large-bodied ichthyosaur from younger rocks in central Nevada. The discovery, which dePolo also contributed to, provides new insights into how long these behemoths roamed the Nevada seas before finally becoming extinct.

“I started the most junior member of the team by a long shot and even now, years down the line, I remain the most junior scientist on this particular paper. It is through Paula's creativity in seeing connections, advocacy, and time investment that I am a member of this team now and I think it is so cool that she and I have been able to continue this collaboration long after I've graduated from UNR.”

Noble formed the initial connection with the Smithsonian team in 2014, sorted out the logistics of permitting, supplied university equipment and vehicles and provided support in the form of graduate and undergraduate researchers. The relationship between the University and the Smithsonian has been mutually beneficial.

“The Smithsonian National Institution is very much in agreement with our mission to educate the populous about our iconic state fossil,” Noble said. “You can talk to people in our state who don’t have any background in STEM. They may not know about stratigraphy and timelines, but they know what the ichthyosaur is. Maybe it’s because they drank some of Tom Young’s beer or they’ve visited the State Park, but the ichthyosaur has always been a really fun way to engage with people in our state around something we’re all excited about.”

Kelley said the next step for this line of research is to investigate other ichthyosaur and Shonisaurus sites in North America with these new findings in mind to begin to recreate their ancient world—perhaps by looking for other breeding sites or for places with a greater diversity of other species that could have been rich feeding grounds for this extinct apex predator.

The 3D scans of the site are now available for other researchers to study and for the public to explore via the open-source Smithsonian’s Voyager platform, which is developed and maintained by Blundell’s team members at the Digitization Program Office. An interactive digital experience about the research team’s study, including a 3D model of ichthyosaur sites analyzed, is also available on the Digitization Program Office’s website.

This research was conducted under research permits issued by the U.S. Forest Service and Nevada State Parks, and it was supported by funding from the Smithsonian, University of Nevada, Reno, Vanderbilt University and University of Utah.

This research she started as an undergrad has continued to be central to dePolo’s academic career.

“I started the most junior member of the team by a long shot and even now, years down the line, I remain the most junior scientist on this particular paper," dePolo said. "It is through Paula's creativity in seeing connections, advocacy, and time investment that I am a member of this team now and I think it is so cool that she and I have been able to continue this collaboration long after I've graduated from UNR.”