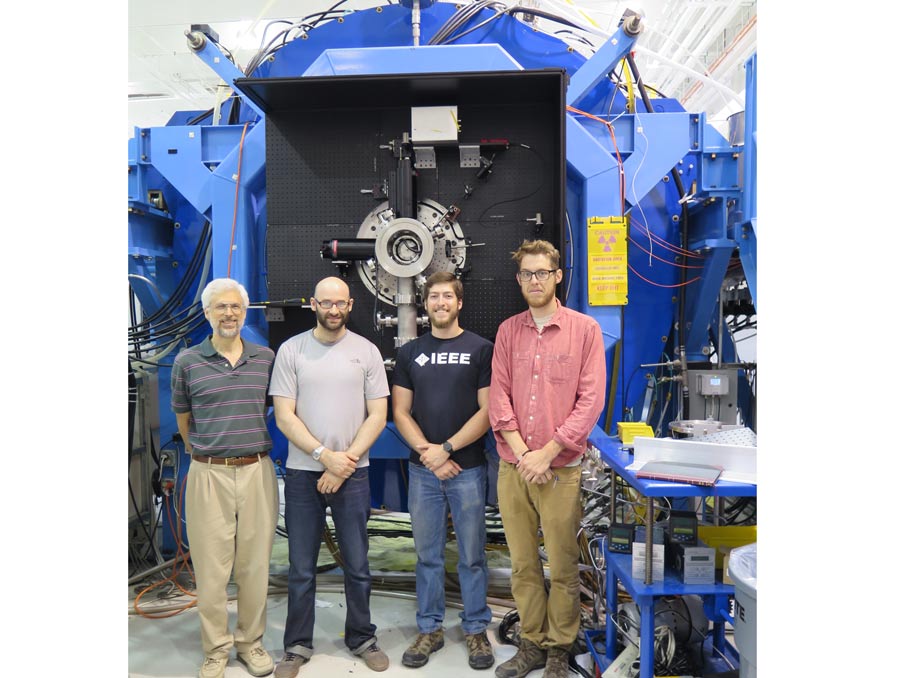 Plasma is an ionized gas containing positively charged ions and negatively charged electrons. Frequently called the fourth state of matter, plasmas found naturally on Earth include lightning and auroras. Stars are also made of plasma and a huge majority of visible matter in the universe is plasma. Applications of plasma physics vary widely, from astrophysics to fusion energy to HEDL plasma physics. HEDL plasma physicists use trillions of watts of electricity and laser light to explore how matter behaves at temperatures of millions of degrees, pressures of millions of atmospheres, magnetic fields millions of times stronger than Earth’s and radiation quintillions of times more intense than sunlight. The Department of Energy grants will enable physics students and faculty to study radiation and instabilities under extreme conditions, which are central topics in plasma physics.

The researchers will use the Zebra pulsed-power generator, the University’s z-pinch device with a current of up to nearly two million amps, to create HEDL plasmas. Although the Zebra z-pinch device is smaller than the 26-million-amp Z machine at Sandia National Laboratories (SNL), it allows researchers to perform a larger number of highly reproducible basic physics experiments. These results are valuable for understanding larger z-pinch devices like the one at SNL.

To create HEDL plasmas, scientists use a pulsed-power device to heat and implode arrays consisting of very fine wires. Safronova’s work aims to study radiation from elements with high atomic numbers such as tungsten and gold, which are very important for fusion applications. By creating z-pinch plasmas from those elements, her research team can study different kinds of radiation, verify new modeling and learn how to most effectively generate powerful x-ray sources.

Safronova’s research is both experimental and theoretical, and the work supported by this grant will be no different. She said it benefits her students to be familiar with both theoretical and experimental methods of exploring plasma physics because it makes them more hirable after graduation. One of the tasks on her grant proposal is developing theoretical codes to model and monitor how conditions in such high-atomic-number plasmas will evolve. This will help save money, as running the large z-pinch devices is expensive, and will help students develop both experimental and theoretical skills.

And, Safronova adds, “Because we do both theoretical and experimental work, we can do really great science.”

Disturbances in the force

One of the few ways to contain plasma, which is too hot to be contained by most materials, is using magnetism. Magnetism is effective but can be disrupted by disturbances like the magneto-Rayleigh-Taylor (MRT) instability, which can quickly grow from a small perturbation to a large disruption. The root cause of the MRT instability has long been sought, and Bauer’s group aims to positively identify it experimentally. To do so, Bauer and his research partners are exploring electrothermal instability, which can be seeded by tiny manufacturing deformities in metal.

Bauer plans to deepen the experimental and theoretical investigation of electrothermal instabilities in collaboration with SNL, the University of New Mexico, Virginia Tech and Los Alamos National Laboratory. Using the 1-million-amp Mykonos generator at SNL, the team will drive huge electrical pulses through ultrasmooth aluminum rods that have micron-scale defects deliberately machined into the surface. During the current pulse, the evolution of the metal surfaces containing microscopic divots and grooves will be recorded, nanosecond by nanosecond, with a suite of high-resolution instruments. Comparing the results of experiments with results from state-of-the-art computer simulations will help the researchers understand the predictive powers of their simulations and further refine them.

These research labs provide valuable opportunities for students to access and learn about HEDL plasma physics, which is important to agencies like the National Nuclear Security Administration of the U.S. Department of Energy. Training and mentoring students in HEDL plasma physics is a major objective of both research projects.