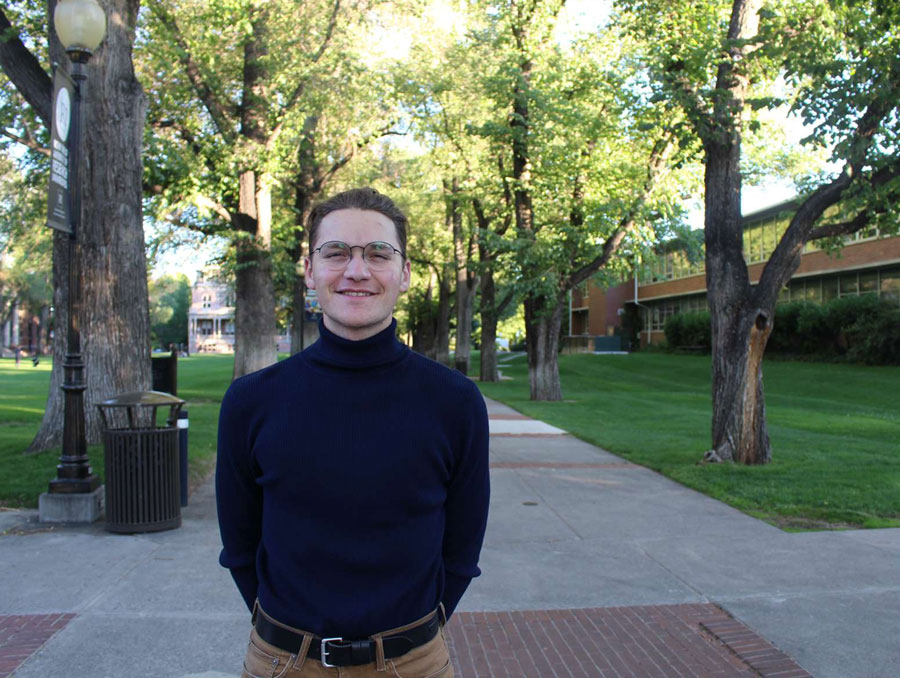 Physics undergraduate student, Jacob Molina, has received the national Goldwater Scholars Award, the only student to receive the award this year in Nevada. The Goldwater Scholarship Program, one of the oldest and most prestigious national scholarships in the natural sciences, engineering, and mathematics in the United States, seeks to identify and support college sophomores and juniors who show exceptional promise of becoming this Nation’s next generation of research leaders in these fields. Molina’s record at the University thus far, and his inspiring plans for his future made him a clear choice for the award. Under the mentorship of Assistant Professor Thomas White, Molina has spent his undergraduate career steeped in plasma and condensed matter physics research, the culmination of which he says has helped “put to rest a decades-long dispute” in the field. Molina has been awarded three undergraduate research grants, performed several oral poster presentations at national conferences, and has a 1st-author publication currently under review.

In addition to his impressive undergraduate research, Molina is also a McNair Scholar who has dedicated much of his time to supporting fellow first-generation students as a tutor of mathematics and physics at the First Generation Student Center. Molina, to graduate in 2022 with his B.S. in physics and two minors in mathematics and philosophy, plans to continue on to pursue his Ph.D. in experimental plasma physics. In the meantime, he will be spending his summer working at the Princeton Plasma Physics Laboratory as part of the Department of Energy’s Science Undergraduate Laboratory Internships (SULI) program. Below he answers a few questions about his education, his path to physics and more.

What first drew you to the fields of physics and astronomy?

My interest in physics is entirely innate and inexplicable. I cannot remember a time where I was not fascinated by it in some way, shape, or form. My interest only grew with time and I really fell in love with it after I took my first high school physics course. The summer before I moved to Reno, I read The Maker of Patterns by Freeman Dyson, and Surely You’re Joking, Mr. Feynman! by Richard Feynman, which highlighted the role that physics plays in our society, what an amazing journey a life in physics entails, and also that you can have a lot of fun along the way! After reading these books I realized there was absolutely nothing else I would rather do with my life.

What research are you working on now?

I have been working with Dr. Thomas White in the department of physics for about 3 years now. We study different kinds of matter at high energy densities – the kind of matter that can be found at the center of planets, or even here on earth in laser-excited materials. We have focused on simulating laser-irradiated films of gold, and our work has shown that an additional energy-loss pathway may be the key to resolving a decades-long disagreement between experimental conclusions and computational simulations. Currently, we are putting the finishing touches on our first publication together and are tying up all the loose ends of our work together before I begin my appointment at the Princeton Plasma Physics Laboratory for the summer, where I will be working under Dr. Derek Schaeffer.

What about your research do you find most exciting?

What made my work with Dr. White especially interesting was the fact that we developed our own interpretation of what was going on, which led to our spending a lot of time attempting to reconcile our work with countless other studies and trying to fit all of the pieces together like a puzzle.

The problem at hand was to try and understand how the same experiment could be performed the same way three different times yet yield different results in each case. What made my work with Dr. White especially interesting was the fact that we developed our own interpretation of what was going on, which led to our spending a lot of time attempting to reconcile our work with countless other studies and trying to fit all of the pieces together like a puzzle. I think it is really exciting to actually solve a problem like this, and to see your work find agreement with other studies.

As you reflect on your education at the University of Nevada, Reno, are there any moments, experiences, people or courses that you look to as especially impactful?

It is very hard for me to understand just how large of an impact Dr. White has had on the course of my life. As a freshman, I would have never thought that I could write a paper, give presentations at conferences, or prepare, let alone win, any grant proposals, or scholarships. Without complaint, Dr. White has spent countless hours revising all my drafts, helping me resolve any problems I encountered, and has, in general, coached me through every obstacle we have had to tackle. Throughout our time working together, he has been incredibly patient with me, guided me through all the hardships that research may entail, and always believed in me all the moments when I did not even believe in myself; he is a shining example of the kind of scientist I would like to be one day.

When you aren’t in the lab or in class, what are you doing? How do you spend your free time?

I typically spend any free time I have during the semester listening to some of my favorite Pink Floyd albums in order to realign myself after a long day. I also enjoy playing my guitar whenever I get the chance. Music is easily just as important to me as physics is. In fact, one of the biggest influences in my life is David Gilmour. It may come as a surprise, but virtually all of the people that I look up to are not scientists. Literature, music, and philosophy, play an essential role in how I approach physics and give me the inspiration I need to make it through some of the tougher moments that inevitably occur throughout a given semester.

As far as my professional life goes, my goal at the moment is to continue my work in high energy density science in graduate school. Over the next 5 years, it would be great to publish another paper and to take part in some fun experiments. Three years ago I would have laughed at anyone who told me I could win the Goldwater scholarship, so it is difficult to estimate what life will be like for me in 10-15 years. My mother has a very beautiful soul, and one lesson she instilled in me at a young age is the importance of enjoying what you do. The long hours can get to be a bit grueling at times, but over the past three years I can honestly say I have never stopped having fun! I truly enjoy what I do. So, over the next 10-15 years, I can only hope that I still smile when I see some really cool physics, and that I am still having as much fun as I am now.

In regard to life outside of physics, I have always wanted to write a book at some point, as well as put together a piece of music - it would be nice to start putting flesh on the bones of these ideas over the next 10-15 years. Growing up, my father always stressed the importance of time to me, and that the end goal of any given period of time is to be able to reflect without regret; ideally, one should be met with the feeling that it was time well spent, and with the slightest incapability of recognizing oneself due to how much they have grown. With absolute certainty, I can say that this is true when I reflect on my time at UNR, and I can only hope it will be true 10-15 years down the line!

It is important to note that I do not come from a scientific background, and that I was not exactly the best student in high school. For almost my entire life my grades were very poor, and I was nowhere near the top of my class. In fact, I was very close to dropping out of my first physics class in high school just because of how hard I found it! It was not until my senior year of high school that I figured out what I wanted to do with my life, and even then, I still had no idea what I was doing most of the time – I was just doing something I loved. I used to worry that maybe I was too far behind, or that it was too late for me to switch lanes in life. If I had to give my younger self any advice, it would be that passion conquers all.

Finally, I would be remiss if I did not thank anyone, as this journey has been very far from being a solo adventure. My being named a Goldwater scholar is really the culmination of three years of guidance, love, and support offered by my mother, father, friends, family, and the McNair Scholars Program. I owe more that I could put in words to my first physics teacher, Mr. Hansen, who stopped me from giving up on myself and inspired me to pursue my passion for physics. Last but not least, I have to thank Dr. White for his continuous support, for being an incredible mentor, and for being a great friend.