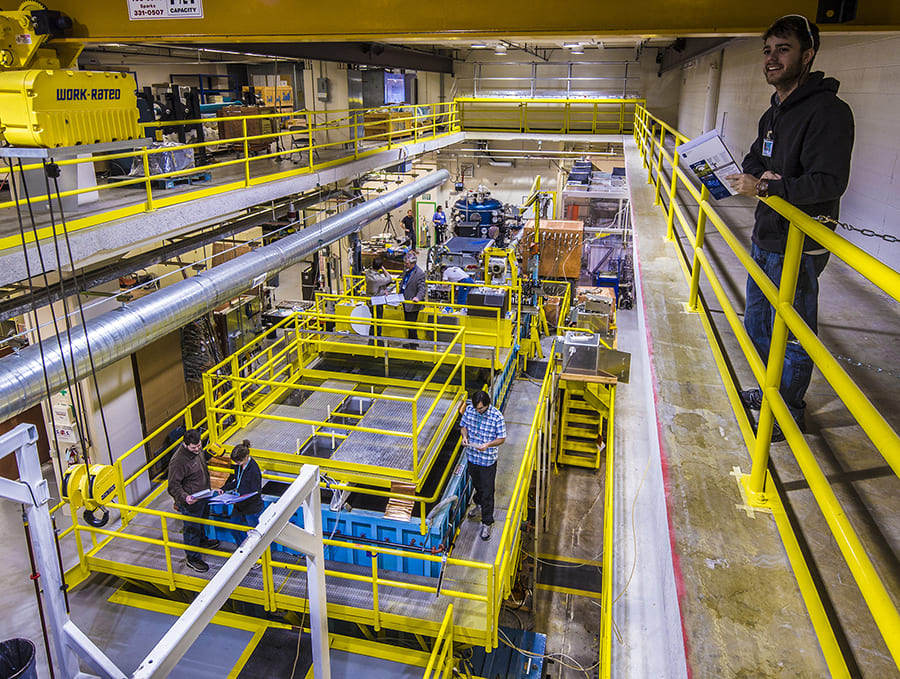 Three physicists at the University of Nevada, Reno have received grants for high-energy-density plasma research from the Department of Energy, more awards this year than any other institution in the country under this program.

The Department of Energy awarded $9.35 million to 21 institutions across the country to conduct research on high-energy-density laboratory plasmas. Of the 21 grants awarded, the University received three grants, the only institution in the country to receive three. Others who received funding included MIT, Princeton, Cornell and John Hopkins University.

"This is another feather in the cap of our high-energy-density plasma physics group," Paul Neill, Chair of the Physics Department, said. "Having the Zebra Pulsed Power Lab, we're able to perform high-quality basic research experiments on site at one of the only University facilities of its kind in the nation."

The area of high-energy-density physics – the study of matter under extreme temperature and density conditions – is a rapidly developing field that explores the fourth state of matter, called plasma, under conditions similar to those occurring in the interiors of stars, nuclear fusion reactors and lightning bolts.

The group has conducted important research at the University's massive Zebra Pulsed Power Lab with its two-terawatt Zebra pulsed-power generator, the Leopard laser, an ultra-intense, ultra-short hybrid laser system, and the Falcon Optical Compressor that modifies the beam of light before it enters the experimental chambers.

The three are: Thomas White, assistant professor of physics; Hiroshi Sawada, associate professor and an expert on high-intensity, short-pulse laser-matter experiments; and Roberto Mancini, physics professor and expert on atomic and radiation physics of plasmas.

Roberto Mancini:
Plasmas driven by intense sources of light are present in many astrophysical scenarios including accretion disks around black holes, warm absorbers and active galactic nuclei. With the advent of the orbiting telescopes Chandra and XMM-Newton, new X-ray astronomy observations have challenged our knowledge of photoionized plasmas. Thus, laboratory experiments have become critical to guide our understanding as well as to test data interpretation and theory models.

The goal of his research is to perform experimental and theory/modeling studies in order to investigate the radiation heating, temperature and ionization of laboratory photoionized plasmas relevant to astrophysics. The majority of the experiments will be performed using two previously established platforms: a supersonic neon gas jet driven by the X-ray flux produced at the collapse of a wire-array z-pinch in the 1 mega-amphere Zebra pulsed power generator at the University of Nevada, Reno; and an expanding silicon tamped-foil sample driven by the X-ray flux produced by an arrangement of copper cavities irradiated by the OMEGA EP laser facility at the Laboratory for Laser Energetics, University of Rochester, also known as the “GatlingGun” X-ray source. Experiments will also be done at the National Ignition Facility of Lawrence Livermore National Laboratory for iron photoionized plasmas that require the large drive energy available at NIF.

Hiroshi Sawada:
Mega-ampere pulsed-power generators such as Zebra at the University of Nevada, Reno are an essential driver to create high-energy-density states of matter. The pulsed-power current can compress a solid material to a high density without significant heating. Material properties of such high density, low temperature plasmas, known as warm dense matter or WDM, are critical information in models for the interior of giant planets and laser fusion cores. Up to date, diagnostics for probing high-density plasmas and WDM are limited.

The objective of Sawada's experimental program is to develop and demonstrate short-pulse laser-based diagnostics for pulsed power-driven cylindrically compressed wires. The experiments will be conducted using both the Leopard laser and Zebra pulsed power in a joint operation. In this work, he will specifically focus on development of high-resolution X-ray radiography using laser-produced broadband and monochromatic x-rays.

This program will also support local undergraduate and graduate students to gain a variety of hands-on training experience including participation of the experiments, data collections and analyses.

Thomas White:
He will be studying electron‐ion equilibration in dense and quantum plasmas. White and his group will use high-resolution X-ray scattering techniques developed at the Linac Coherent Light Source and the European XFEL free-electron lasers. This work will advance our understanding of non-equilibrium systems by performing the first direct measurement of the ion temperature inside a dense plasma.

By unambiguously determining the electron-ion equilibration rate during the solid-to-plasma phase transition, we will differentiate between competing theoretical models in several metals where there remain order-of-magnitude differences. Combining this temperature measurement with structural diffraction data they will resolve the controversy surrounding bond-hardening in warm dense gold. The experimental work is supported by predictions of the equilibration rate using new advanced simulations that incorporate the electron dynamics within a complex, quantum-mechanical framework.

Department of Energy's Office of Science and the National Nuclear Security Administration Joint Program in High-Energy-Density Laboratory Plasmas was established to leverage NNSA’s expertise to steward advances in HEDLP science within the Department of Energy.

“This joint program between SC and NNSA is an excellent example of leveraging resources within the Department of Energy to advance discovery-driven science,” said James Van Dam, associate director of science for Fusion Energy Sciences. “These projects at the frontier of high-energy-density plasma science also have the potential for advancing our nation’s industrial capabilities and homeland security.”