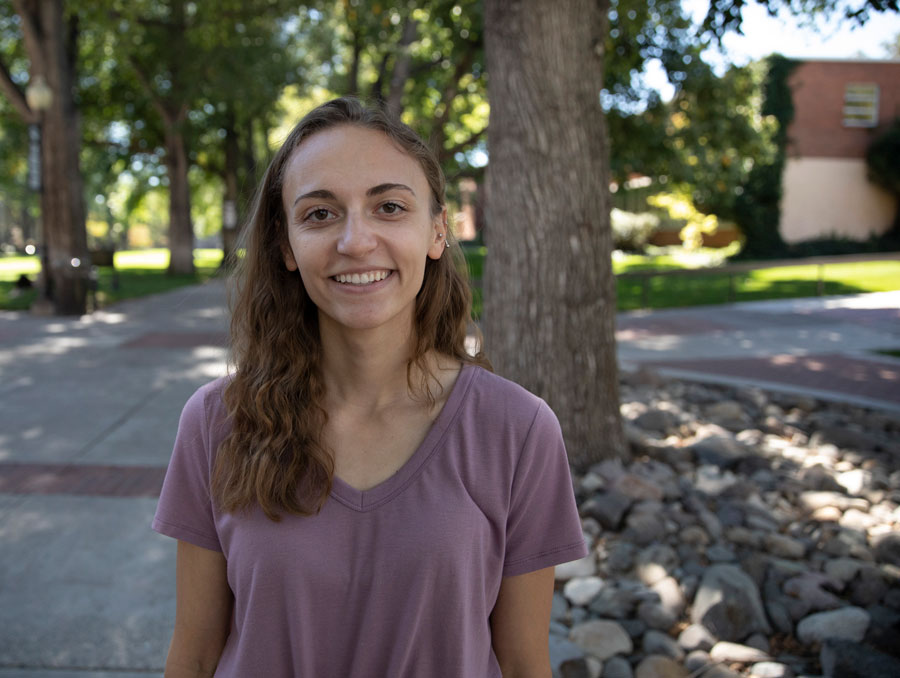 “Proprioception is your ability to sense the position and movement of your body,” Amy Morris, a graduate student in the Department of Psychology, said. Proprioception is what allows you to type on a keyboard while looking at the computer screen, or walk downstairs without looking at your feet.

Morris is a second-year doctoral student in the Integrative Neuroscience Graduate Program. Her interest in proprioception started during an internship at the University of Delaware where she learned about how an area in amputees’ brains changes after an amputation.

“During one of the lectures at the internship, the Pinocchio illusion was really off-handedly commented on but just having a brief intro on the illusion I was hooked,” Morris said. The Pinocchio illusion involves tricking one’s brain into thinking their nose is growing or their arm is extending. This is done by blindfolding a participant, who receives a vibration on their bicep while touching their finger to their nose. If the participant experiences the illusion, they will feel like their arm or nose is elongating.

“Following that internship, I took at course at my undergrad university where I designed and ran my own experiment, and I structured that experiment around the illusion,” Morris said.

She is currently working in Associate Professor Fang Jiang’s research lab, where her research compares proprioception in older adults and younger adults. Morris is also interested to know whether older adults are more susceptible to the Pinocchio illusion due to impaired proprioception.

“As you age, your proprioception worsens,” Morris explained. To understand the impact of age, she is measuring proprioception using a standard joint position matching test. An experimenter moves a participant’s arm to a specific position, and the participant is asked to move his or her arm to a neutral position, then back to the position the experimenter placed it in originally. How closely the participants match their arm to its prior position is a measure of proprioception. Her preliminary data showed that older adults have larger errors, indicating worse proprioception, than younger adults. She is currently collecting more data so she can look at the relationship between joint position matching performance and susceptibility to the Pinocchio illusion.

Morris is also interested in how worsened proprioception in older adults affects their gait, the way that they walk.

“If you have a lowered or impaired sense of proprioception, it can negatively impact your balance which impacts gait,” Morris said. In collaboration with Institute of Neuroscience Assistant Professor Nicholas Murray and his Neuromechanics Lab, researchers measured participants’ gait speed, step length, and step width, while they were asked to walk with or without shoes on, and with or without an additional cognitive task. Her preliminary data suggest people who perceived the Pinocchio illusion tend to walk slower and more carefully, regardless of their age.

Morris recently won the Jerry and Betty Wilson Award, nominated by faculty members in the psychology department. Winning the award, which provides a scholarship, helped Morris feel supported and like she belongs at the University.

“Since joining the University last fall, Amy has been keen to learn new skills and techniques, and to mentor undergraduate students in the lab,” Jiang said. “Beside research, Amy has also been well received in her teaching assistantship assignments.”

Coding is a large part of any graduate student’s research, and Morris is considering pursuing a master’s degree in computer science as she progresses toward her Ph.D. For now, Morris said she is most interested in pursuing her research question of what the neural mechanisms are underlying age-related impacts on proprioception and gait. A better understanding of these mechanisms is important for the development of interventions. She is applying for the National Science Foundation (NSF) Graduate Research Fellowship Program (GRFP), a prestigious program that recognizes and supports promising graduate students in NSF-supported STEM and social science disciplines.

Even before moving to Reno for her graduate studies, Morris became involved in a program called Nevada Ensures Support Together, or NEST.

“It was developed to help with the social isolation from the pandemic,” Morris said. Each week, Morris would talk with a couple of people. Those people tend to be older adults, who were more likely to suffer from loneliness due to the pandemic, but the NEST Collaborative also serves veterans and adults living with disabilities. Morris doesn’t talk with as many people through NEST anymore, due to being busy with her graduate studies and her teaching responsibilities, though she makes time when she can.

“I still chat with one woman every week. It’s improved my life a lot,” Morris said. The people she spoke with told her about places to visit and the culture in Reno. “For me it’s cool, because I didn’t know Reno at all before I moved here.”