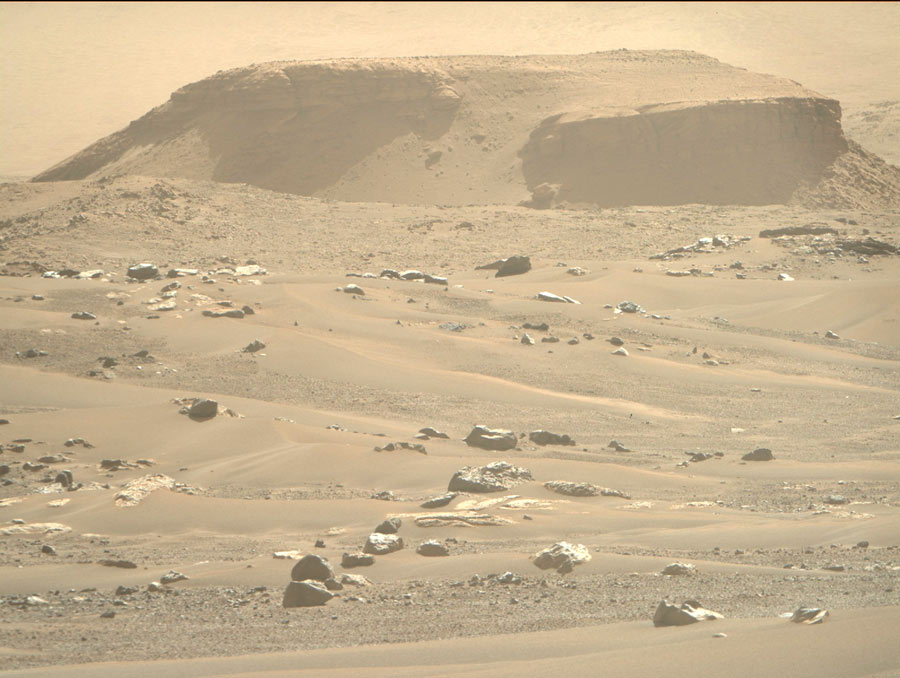 Wendy Calvin, Professor and Chair of the Department of Geological Sciences and Engineering, is a planetary scientist specializing in optical and infrared spectroscopy of minerals and ices. She has been working with data from Mars since she completed her doctorate in 1991 and has been a member of the Mars Exploration Rover (MER) team since 2002. As part of the Discover Science at Home series, a virtual adaptation of the Discover Science Lecture Series, Calvin presented her lecture titled “Roving Mars: From Sojourner to Perseverance” about the scientific discoveries made on Mars since the first rover landed on its surface in 1997. The following is a transcript of the Question and Answer portion following Calvin’s lecture.

Can you speculate on whether microbial life previously or currently exists on Mars?

The Allan Hills meteorite was really controversial. What I said to the team at the time and what I still think is that we have so little evidence on Earth about what happens in the time between the formation of the planet and when we actually have self-replicating organisms. We just have no idea what that intermediate stuff is. I thought what we found on Allan Hills might be one of those intermediate steps.

I also don’t think that Mars was habitable for long enough. We had water, but I don’t know that those environments persisted long enough for the process to really get started. If we do find anything, we’re going to find the most primitive forms, from the base of the tree of life, some of these things that are not even multicellular.

In some ways, I hope we don’t find life because then the public would just tell us, “No, no. It’s going to contaminate us. We can’t bring it back.” So, in some sense I hope we don’t find too much more than the typical organic molecules that we find in the oldest meteorites.

Why is the Mars atmosphere so thin and what do we know about its history?

Mars had a magnetic field early on, but then it disappeared. It’s still controversial how thick the atmosphere was, how hot it was early on and if the surface could support liquid water for sustained periods. The Maven Orbiter has done a lot to understand how much water has been lost over time. I don’t know the total mass or volume, but we know that Mars has lost a large portion of its original atmosphere.

Where did all the water on Mars go?

I think it all went underground and it’s frozen. We now have evidence from the two orbiting radars that Mars has massive buried ice sheets and rock glaciers that actually have glacial flow features. The radar actually confirms that they’re probably insulated by a layer of regolith or dirt and then under that is some pretty pure water. We have gamma ray information that says we have strong concentration of water in the polar regions and also buried ice, which is what the Phoenix Lander also found. So, I think that Mars’s water went underground and froze.

Do you think there will be any issues with mineral alteration due to changes in temperature and pressure during sample return to the Earth?

They’ve actually looked at that a lot and tried to understand what is the environmental conditions for the sample return canisters and is that really going to change what they get. The rocks have already been subject to the temperature extremes of the Martian surface and they will have a fairly stable thermal environment in the ascent vehicle. That should not be worse than the extremes that they’ve actually already seen on the surface of Mars.

Why are there no plate tectonics on Mars?

There are no plate tectonics on any other planet in the solar system or even any moon, although maybe people have proposed something kind of like that for Europa. Earth is unique. A lot of what makes Earth unique and why plate tectonics are on Earth is because we have water. We have a ton of water and that water actually lubricates the plate cycle and it helps things move around in a way that doesn't happen on Venus or Mars. Mars probably didn’t have enough water for things to actually start happening. When and how plate tectonics got started on Earth is one of those things that is still a subject of active research.

What planet, besides Mars, would you be interested in studying with a rover?

I would probably head to the ocean worlds. I think Europa is a prime site to send a rover. Venus would be an interesting place to send a rover too but it’s really hot and the surface of Venus is really inhospitable so it might be trickier. Although, Europa is not a cakewalk either.

In the movie, The Martian, what did they get right and what bothered you the most?

I saw The Martian and I read the book. What bothered me the most was I think the final scene, where they’re launching that rocket without a nose cone, right? They’ve just got some tarp over it. That was so incredibly ridiculous.

The dust storms and the wind storms, are also pretty bad. There’s not that much wind velocity on Mars. The dust just goes up and it just turns into this sort of cloud in the sky, but it’s not like there’s gale-force winds that go with it. I think those two things were probably what bothered me the most.

How realistic are our plans to send astronauts to Mars in the next few decades?

NASA is working on the Moon to Mars program in a lot of detail. I think they have goals, but it depends on each administration. Every administration comes in and has different big plans that they want to do. It’s been something of a political football, but NASA’s working on it. I think that SpaceX has really ambitious plans. They’ve been really successful and I’ve been really impressed with a lot of the things that they’ve accomplished, but landing people on Mars and bringing them back, you need a lot of rocket fuel to do that.

How did you get started in this work?

When I look back, I have to connect the dots. I majored in physics and math because they were easy and I was good at it. Then I went to work for an aerospace company for a couple of years, but working mostly on Earth spacecraft systems. When I started back in graduate school, one of the first research projects I had was with a planetary scientist. That kind of gave me the planetary bug. For my Ph.D. thesis, I worked with data from the Mariner 6 and 7 spectrometers which flew by Mars in 1969 when I was in grade school. And then 30 years later, here I am.