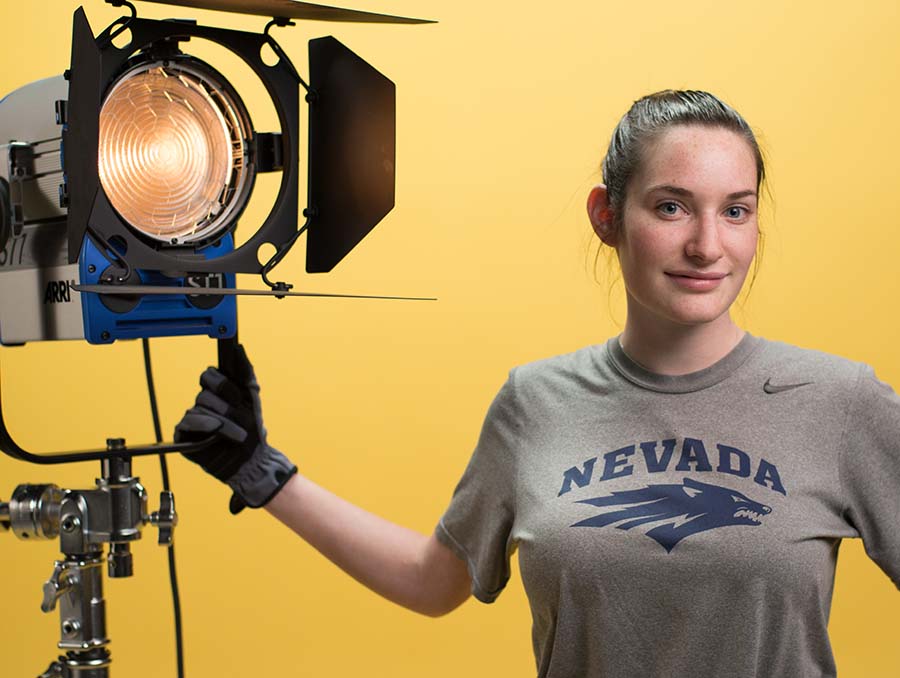 A new opportunity is available in the Reynolds School of Journalism at the University of Nevada, Reno. Students interested in making movies, documentary films and other video productions can now earn their bachelor’s degrees in journalism with an emphasis in film and media production. The emphasis started in fall 2021.

“We were always hearing from students interested in film, and now, we're delighted that we're going to be able to meet that demand,” Reynolds School Dean Alan Stavitsky said. “For us, film and media production is the next frontier for our program.”

Students in this emphasis will take classes in scriptwriting, documentary filmmaking and media production and will have the opportunity to learn from award-winning professors with experience in the film and media fields.

A history of documentary and media production

Associate Professor of Electronic Media Kari Barber, MFA, an award-winning documentary filmmaker and journalist, came to the school in 2013 and teaches documentary film and media courses.

“One of the areas where a lot of students were always interested was film and media production classes, but they were never in a certain emphasis of their own,” Barber said. “We certainly have the breadth to do this now.”

“As a school, we have accrued a vast experience and knowledge in the area, allowing us to craft a program of study that will ready students for successful and lucrative careers in film and media production industries,” Korin said.

While the emphasis is new, audiovisual content creation has been a core part of the Reynolds School’s curriculum for years. The school’s history with broadcast news and media production began with multimedia reporting, eventually evolving into the addition of a documentary film class and a yearly student film festival.

“Many of the student films from the class have been in festivals across the United States and have even won awards,” Barber said.

The film “Rainbow Rodeo,” which showcased the rise of the Reno Gay Rodeo, was the 2020 People's Voice Winner at the Webby Awards, an international awards festival honoring excellence on the internet. “Más Que Pan,” a bilingual film about a Guatemalan baker living in Reno after fleeing his home country, won Best Student Film at the International Film Festival Manhattan in 2021.

“We work on [students] actually creating their own original productions that are combining theoretical models with their own creative output,” Running Wolf said.

Students can practice hands-on, technical skills and produce their own work with the equipment and studios available in the school.

“Pretty much anything that you might need, we probably have at the Reynolds School,” Barber said. “We're trying to take advantage of our fortune in having this excellent equipment and facilities for production.”

Along with its resources, the school’s location of Reno, Nevada, only a short plane ride away from Los Angeles, California, is ideal for students wanting to train in the field.

“Reno is not far from the number one entertainment industry hub, Los Angeles,” McClinton said. “Students can stay right here and make programming.”

Students graduating with an emphasis in film and media production have prospects to enter careers as independent filmmakers or documentarians, producers, directors, cinematographers and editors in the film industry.

“There's a lot of career opportunity in this sector now,” Stavitsky said. “That is, in large part, why we established this emphasis – to provide more opportunities for our students.”

Current Reynolds School junior Joffea Burgos chose the film and media production emphasis because of her love for creating films. Within the emphasis, her classes include documentary filmmaking and intermediate media production.

“My future career aspirations are to either be a video editor and a video producer,” Burgos said. “I'd love to work for companies like Vox, A24, Netflix, where I'm able to create and produce incredible content and films [and] potentially create my own films as well.”