Staggering population declines in the world's freshwater megafauna (big fish, dolphins, crocodiles, etc.) have been revealed in a study published in Global Change Biology. The study, spanning 42 years, compiled global population data for 126 species covering 72 countries or regions. Results showed that freshwater megafauna populations have declined by an average of 88%. The situation in Asia, and in particular in the Mekong and Yangtze Rivers, is especially worrisome. Some species may already be extinct, and populations of others have declined by 95-99%.

The study was a collaboration between several coauthors from North America, Europe and Asia, including Zeb Hogan, research professor at the University of Nevada, Reno and fish biologist. Hogan has been studying and advocating for these threatened populations for over 20 years. "The results are a wake-up call to us about the plight of these species," Hogan said. "Many of them are at risk of extinction, and almost all of them need our help. It's a race now to see what can be understood and protected before it's too late." 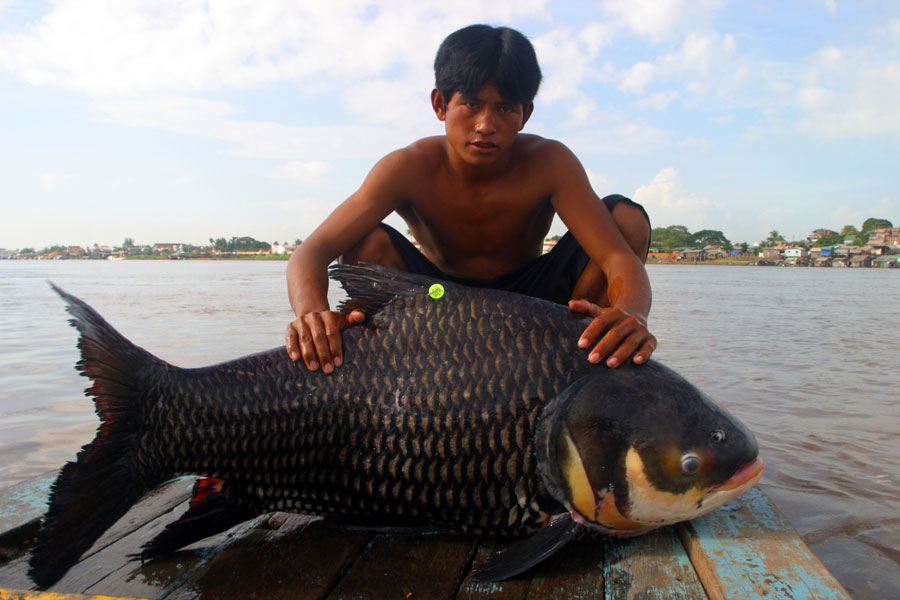 A young Khmer man poses for a photo with a giant carp at the edge of the Tonle Sap River in Cambodia.

Causes for the decline

Two main factors are cited as contributing to the drastic declines in large freshwater species: their sensitivity to environmental changes and overexploitation. Large-bodied animals often have complex habitat requirements, a lower reproductive output than their smaller counterparts and slow maturity, making them particularly susceptible to extinction. Habitat degradation and fragmentation due to dams and other disruptive human development, pollution and invasive species have been devastating to these populations. Overexploitation by way of illegal harvest and trade also remains a key threat to the megafauna. Often used as luxury foods and medicines, large fish, crocodiles and turtles are caught and sold for their meat, eggs and skin.

Because of the sensitivity of these large freshwater species, they serve as the figurative canary in the coal mine.

"Freshwater megafauna, in many cases, are among the most vulnerable animals in aquatic ecosystems," Hogan said. "They are symbolic of the overall health of the ecosystem and an indicator of when a system is not being managed or developed sustainably. While freshwater megafauna are often the first to disappear (we've seen many cases of 99% population decline, even extinction), they are not usually the last to be impacted by threats. Once the largest animals go, it's a warning we need to do something quickly to improve ecosystem health."

A clear example of this can be seen in the Mekong River. The largest species of fish - the Mekong giant catfish, Pangasius catfish, giant carp and giant freshwater stingray - are all endangered. Their dwindling populations clearly indicate unsustainable fishing practices and unsustainable river basin development. Mekong River species are among the largest, most unique and most threatened freshwater megafauna on the planet. The Mekong is home to more giant fish species than any other river on Earth, and yet these fish are struggling for their survival. The Mekong River has proven itself incredibly resilient but the accelerating pace of change, coupled with cumulative impacts of trans-boundary stressors and the impending impacts of climate change point to a common concern among those who work and live in the lower Mekong River Basin: a fear that the river, which is the lifeblood of most of Southeast Asia, will gradually lose function until it no longer supports the huge diversity of wildlife and millions of people that depend on it. These concerns are not trivial. Researchers predict the vulnerability of Mekong economies to the impacts of unsustainable development and environmental change, and models of future flow and sedimentation rates suggest major disruptions to the region's billion-dollar freshwater fisheries and aquaculture industries.

Despite the alarming declines in freshwater megafauna populations, opportunities to protect these and other freshwater species exist. Targeted conservation efforts have proven to be successful. The study cites stable population increases in 13 species of megafauna in the United States, including two species of sturgeon and the American beaver, due to persistent conservation efforts. In 2018, the Asian Irrawaddy river dolphin, while still labeled "vulnerable" by the World Wildlife Federation, saw its first-time population increase in the last two decades due to effective conservation efforts including increased patrolling by river guards and an increase in the confiscation of illegal gillnets, which can inadvertently trap the dolphins. However, the conservation of megafauna is not pervasive, leaving the future survival of these fascinating animals at risk. Hogan is the Director of the Wonders of the Mekong Project aimed at maintaining the ecological, cultural, and economic integrity of the Mekong River system through applied research, capacity building, and communication. He is also a researcher with the Global Water Center at the University of Nevada, Reno where ongoing projects around the globe look for solutions to the most pressing challenges facing freshwater ecosystems and the people and biodiversity that depend on them. In Mongolia, for example In Mongolia, the Global Water Center works with anglers, fishing companies, and the government to develop sustainable fishing regulations including mandatory catch and release of Endangered giant trout. Hogan and the study coauthors agree that human fascination with megafauna species can be leveraged to raise public awareness of the crisis in freshwater ecosystems.

"These animals are at risk of extinction," Hogan said. "A few of them may already be gone. I feel an obligation to share my knowledge and stories about these fish before they disappear. My hope is that as people learn more about them, the threats they face and the possible solutions to the most urgent problems, people will take action to protect them. We already see this occurring in terrestrial and marine systems with the establishment of National Parks and Marine Protected Areas. We need the same type of durable protection for rivers and lakes."

Hogan's traveling museum exhibit, "Monster Fish: In Search of the Last River Giants," is an educational and immersive way of informing the public of the challenges facing freshwater megafauna. The Wonders of the Mekong Project and the Global Water Center collaborate with researchers, students, government scientists, and civil society including NGO's and fishermen, local to the areas most threatened. These critical partnerships help inform research and conservation priorities while also empowering local partners to continue conservation work after a project ends.

In 2015, National Geographic Museum launched a traveling exhibit based on Hogan's research efforts. titled "Monster Fish: In Search of the Last River Giants," the exhibition highlights some of the world's largest freshwater giants.

The study published in Global Change Biology calls attention to the dire situation facing freshwater megafauna globally as well as the critical need for timely and extensive conservation efforts around the world. Combating the threats to these unique species populations will be challenging, but action is crucial to their survival.

"We need increased study and awareness about these extraordinary animals so that we have the skills needed to protect them," Hogan said. "We all need to be good stewards of freshwater ecosystems, given the people and animals that depend on them for survival."