A worldwide consortium of scientists has catalogued rivers around the globe, quantifying how many free-flowing rivers still exist. They are few.

The researchers determined only 21 of the world's 91 rivers longer than 1,000 kilometers that originally flowed to the ocean still retain a direct connection from source to sea. And only 37% of the world’s longest 246 rivers remain free-flowing.

The researchers work, the first-ever global assessment of the location and extent of the planet’s remaining free-flowing rivers, was published in the scientific journal Nature. It estimates there are around 60,000 large dams worldwide; and more than 3,700 hydropower dams are currently planned or under construction.

The team of 34 international researchers, led by McGill University and World Wildlife Fund, assessed the connectivity status of 7.5 million miles of rivers worldwide. Healthy rivers support freshwater fish stocks that improve food security for hundreds of millions of people, deliver sediment that keeps deltas above rising seas, mitigate the impact of extreme floods and droughts, prevent loss of infrastructure and fields to erosion, and support a wealth of biodiversity. Disrupting rivers’ connectivity often diminishes or even eliminates these critical ecosystem services. 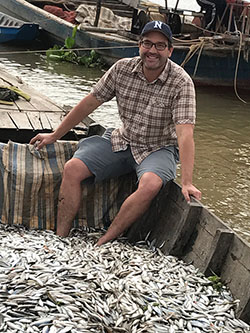 “The Nature paper, with its mapping and monitoring of the global status of free-flowing rivers, raises awareness about the level to which rivers have been modified and impaired, helps us identify priority sites for restoration and highlights the locations where it may pay off to keep rivers wild,” Zeb Hogan, a co-author of the paper and a conservation biologist in the College of Science at the University of Nevada, Reno, said.

A prime example of a river system affected by development, and the potential for even greater negative impacts, is the Mekong River, which Hogan has studied for 20 years.

“The accelerating pace of development and dam-building, coupled with cumulative impacts of transboundary stressors and the impending impacts of climate change, point to a common concern among those who work and live in the lower Mekong River Basin: a fear that the river, which is the lifeblood of most of Southeast Asia, will gradually become so fragmented that it will lose function, and thus no longer support the huge diversity of wildlife and millions of people that depend on it,” he said.

Hogan’s current work on the Mekong is a project within the University of Nevada, Reno’s Global Water Center. The 5-year project, “The Wonders of the Mekong: A Foundation for Sustainable Development and Resilience,” aims to preserve a functional, biodiverse and healthy Mekong River. It is funded by the U.S. Agency for International Development Asia Bureau. in partnership with the Cambodian Inland Fisheries and Development Institute, with which he’s been working since 2000 to study the huge migration of about 100 different kinds of fish numbering in the billions throughout the network of rivers in Cambodia.

One of Largest Migrations on Earth
“It’s one of the largest and most important animal migrations on Earth, and most people don’t realize it’s happening,” Hogan, who hosts the NatGeoWild show “Monster Fish,” said. “The migration rivals the great terrestrial migrations of the Serengeti in Africa, or caribou in Alaska or the millions of songbirds traveling thousands of miles from Europe to reach wintering grounds in Africa.”

At 2,700 miles long, the Mekong is the 12th longest river in the world, spanning several countries. The Mekong countries have long been tapping their natural resources for economic growth and have installed numerous dams for hydropower and other purposes.

A long stretch of highly connected mainstem river in the Lower Mekong still exists that facilitates movement of sediments, nutrients and fish between the river, the Tonle Sap Lake and the Mekong Delta.

However, two dams proposed along this stretch of the lower Mekong river, the Sambor and Stung Treng hydropower projects, could be the final straw for the Mekong river. These dams, proposed in Cambodia’s portion of the river, would have detrimental effects for local food security as Mekong fish provide 76% of protein consumed in Cambodia. 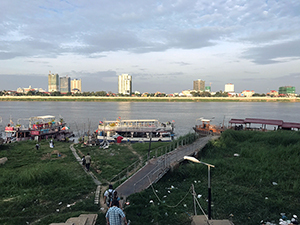 A similar wave of dam building now planned in the biodiversity hotspots of the Amazon, the Congo, and the Mekong could have similarly dramatic effects: the potential extinction of hundreds of unique species, loss of subsistence fisheries key to the livelihoods of rural people, and collapse of commercial harvests that help drive national economies – and are worth billions of dollars.

From megafish such as the Giant Mekong Catfish that reaches 600 pounds, to the tiny “trey riel,” he has studied dozens of fish on every continent around the globe. He documented these studies with his NatGeoWild “Monster Fish” show aiming to find, study and protect the largest freshwater fish on the globe.

And while he travels the globe working to protect fish and the rivers in which they swim, he only has to look at his home state to see the impact on migrations from humans.

“Almost anywhere you look in Nevada, migratory fish need our help,” Hogan said. “In the Truckee River, Lahontan Cutthroat Trout once made epic migrations out of Pyramid Lake and upstream toward Lake Tahoe. In Walker Lake, Lahontan Cutthroat trout once thrived, now the fish are gone. Along the Colorado, we had healthy populations of migratory big river fish like the Colorado pikeminnow, North America's largest minnow species. Pikeminnow are now gone from Nevada. In far northern Nevada, we once had migrations of Chinook salmon – the largest of all Pacific salmon – that grow to 100 pounds. These migrations no longer occur in Nevada.” 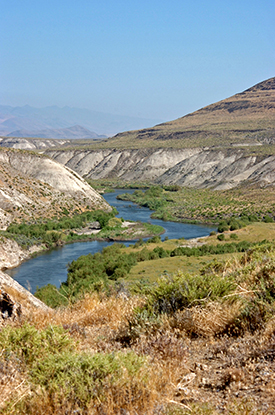 And just a short distance away the impacts can be seen along the embattled Colorado River.

“On the Lower Colorado River Basin in Arizona, Nevada, and California, dams and fragmentation have totally altered the river – the flow, water temperature, fish, plants, and other aquatic animals,” Hogan, who is the United Nations Convention on Migratory Species Councilor for Fish, said. “The river – in many locations – would be unrecognizable to people living along its banks 100 years ago. On the Columbia River, due to dams and other factors, populations of wild salmon have declined by about 95%; and many stocks and runs – like those that migrated into northern Nevada – have disappeared entirely.”

Hogan’s unique research focus has also enabled him to connect with conservation organizations around the world – he has been involved, since the beginning, with World Fish Migration Day, and is now an Ambassador and on the steering committee for the global event. World Fish Migration Day is a one-day event every two years designed to raise awareness about the importance of healthy, free-flowing rivers and migratory fish.

For more information about this project and others run by the Global Water Center, check out In deep water: the challenges of protecting our most precious resource.

And, as this first-ever assessment of the extent of the planet’s free-flowing rivers brings to light, Hogan said more than 70% of Europe's anadromous fish (fish that migrate from the ocean to freshwater) are gone, 95% of the world's migratory sawfish are gone, migratory eel populations are in decline, and more recently the migratory fish of major tropical rivers like the Amazon, Congo and Mekong are under great threat from hydropower development. To put that threat in context, an estimated 40 to 70% of food fish in the Mekong are migratory and more than 60 million people depend on the Mekong River for their livelihoods and food security.

“This global map of free-flowing rivers makes it possible for us to see and evaluate the impact we have had on the world's large rivers, take stock of those changes, and better appreciate the many values of healthy, connected rivers to humans and wildlife,” Hogan said.

Healthy rivers support fisheries that are critical to the food security of hundreds of millions of people, sediment flow that keeps deltas above rising seas, and biodiversity. Healthy rivers also help mitigate the impact of extreme floods, droughts, and storm surges. See this description of free-flowing rivers.