Team CERBERUS is one of 11 robotics teams from around the world participating in the exclusive Defense Advanced Research Projects Agency's DARPA Subterranean Challenge Aug. 15-22 navigating aerial and ground robots in a defunct mine system in Pittsburgh, Pennsylvania.

Led by Kostas Alexis of the University of Nevada, Reno's Computer Science and Engineering Department, the CERBERUS team will put to the test their technologies aimed at revolutionizing how robotic systems navigate and operate in the underground domain - human-made tunnel systems, urban underground settings and natural cave networks that are too dangerous, dark, deep and unknown to risk human lives.

"We are excited to be participating, we've spent months preparing and the systems have all come together well," Alexis said. "We're looking forward to competing, and having our robots perform their tasks in an autonomous manner." 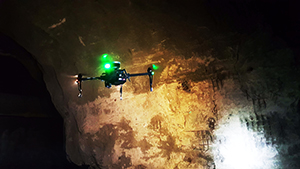 Team CERBERUS, funded by DARPA, is already at the competition site preparing to participate in the Systems challenge. They have developed novel approaches to rapidly map, explore and search underground environments in time-sensitive operations critical for the civilian and military domains alike.

The walking and flying robots are equipped with multi-modal perception systems, navigation and mapping autonomy, and self-organized networked communications. These features enable robust and reliable navigation, exploration, and mapping and object search.

A typical CERBERUS mission relates to the deployment of two ANYmal robots, one Aerial Scout and one Collision-tolerant aerial robot. The flying robots will explore as rapidly as possible and share maps. The ANYmal systems undertake the task of long-term exploration and mapping.

All types of systems are capable of resilient localization in the sensing-degraded environments found in subterranean settings (such as smoke, dust and mist) and decide on their own with respect to the best path to follow. The Super Mega Bot follows the team and is positioned where communications enhancement is mostly needed. Communication nodes are breadcrumbed by ANYmal to facilitate a reliable network underground. As the robots explore the underground domain they will report the class and location of specific objects of interest to DARPA.

Team CERBERUS (CollaborativE walking & flying RoBots for autonomous ExploRation in Underground Settings) is based on the collaboration between a team of experts that, for the last few years, have been at the forefront of walking and flying robots research. This includes Alexis, director of the Autonomous Robots Lab at the University of Nevada, Reno; Professor Marco Hutter of the Robotic Systems Lab at ETH Zurich, Professor Roland Siegwart of the Autonomous Systems Lab at ETH Zurich, Professor Mark Mueller of the HiPeR Lab at U.C. Berkeley, Maurice Fallon of the Oxford Robotics Institute Sierra Nevada Corporation based in Sparks, Nevada and Flyability based in Switzerland.

To get a taste of what the competition entails, this video presents the team's recent results on Autonomous Exploration and Mapping in Underground Mines using Aerial Robots.

Similarly, the ANYmal, a quadrupedal robot developed by RSL (ETH Zurich) and ANYbotics, is deployed in real-world environments showing its locomotion and mapping capabilities in a different type of rough terrain.

As these robots explore the subterranean environment, they derive accurate maps of their surroundings which are wirelessly transmitted aboveground.

The first round Systems Circuit in the competition next week will be followed by round two, the Urban Underground Circuit in February 2020, and the third round, the Cave Circuit is scheduled to take place in August 2020. The Final event, planned for 2021, will put teams to the test with courses that incorporate diverse challenges from all three environments