In research, success tastes better after a dose of failure 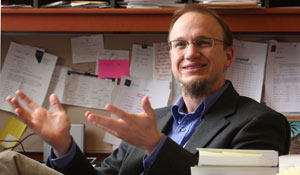 In research, success tastes better after a dose of failure

As counterintuitive as it sounds, Brian Frost believes failure and research go hand in hand.

“Success in the research lab is almost always the exception,” says Frost, an assistant professor of chemistry who was recently selected as the University’s 2008 Outstanding Undergraduate Research Faculty Mentor. “Most students expect the opposite. They feel that if a research project doesn’t work, they must’ve done something wrong. Then they’re usually in your office, asking, ‘Why? I must be a horrible researcher.’”

Frost has to smile at this point. Because whenever a student enters his office, asking about their research, he knows he has them.

“The first thing I tell them is, ‘No, that’s not the case … you aren’t a horrible research scientist,’” Frost says. “I have to explain that research is much different than the teaching labs they might have had. In research, if something works, that’s a really big deal. ‘Failure’ is perfectly normal in a research lab.

“What’s really fun is when something starts to work. Just seeing my students so excited – ‘Oh my God, this worked!’ – is an amazing feeling. They’ve found the type of excitement that they wouldn’t have gotten if everything you gave them worked on the very first try.”

If Frost sounds like he can be a proud professor when his students succeed, you are right.

And, if he sounds like a patient professor, you would be right about that, too.

Just ask Charles Schaeffer, professor of chemistry at Elizabethtown College in Elizabethtown, Penn., where Frost was an undergraduate.

While Frost fondly remembers many one-on-one teaching sessions with Schaeffer, his former professor recalls an incredibly motivated student who was already showing many of the traits that have made him a success in the six years he has taught at Nevada.

“Brian was always prepared, and he planned his laboratory work schedule carefully, often days in advance,” Schaeffer says. It was under Schaeffer’s tutelage that Frost began the sometimes tedious and difficult process of manipulating air- and moisture-sensitive compounds.

Interestingly, for a process often fraught with failure, Schaeffer says Frost’s success rate – and his ability to learn when things didn’t go right – was impressive.

“To achieve success in this type of project, Brian’s efficient scheduling of his research activity was especially gratifying,” Schaeffer says. “He often skipped lunch to insure their successful completion. And successful results are just what he achieved.

“Brian did a better job of applying basic chemical principles to our research project than almost any other student with whom I’ve worked during the past 30 years.”

“Dr. Schaeffer was just somebody, who, in the morning, you’d go into his office and talk to him about what you were going to do that day,” Frost says. “So there was a lot of one-on-one feedback. I’ve always liked that kind of interaction. When you get students into the research lab, and you spend extra time with them, you have the opportunity to watch them mature and prepare to go off and do great things.

“Being able to at least to try to mimic some of the things I learned (when Frost was an undergraduate) here has been exciting for me.”

Vincent Catalano, chair of the University’s Department of Chemistry, says that Frost relates well to all of his students. Particularly undergraduates.

“Brian believes strongly in connecting the classroom to the laboratory, and always tries to interconnect the two at every opportunity,” Catalano says. “I’ve always been impressed with how Brian tailors his research projects for each of his undergraduate students, and in doing so, he always challenges them to perform to their full potential.”

Although he is only 34, Frost’s career has already seen several important milestones.

In addition to the Outstanding Undergraduate Research Faculty Mentor Award from the Office of Undergraduate Research, he is also a recipient of a prestigious National Science Foundation CAREER award, a defining national milestone in the career of a young scientist. His research in aqueous-phase catalysis is geared toward the development of technologies to limit hazardous waste streams.

To date, Frost has worked with 18 undergraduate students on undergraduate research projects. Nine of the students have published peer-reviewed papers on Frost’s areas of research, water-soluble phosphine ligands and catalysis.

The group includes Gene Wong, 22, a Sparks (Nev.) High School product who graduated from the University with a degree in chemistry in May 2007. Wong is currently in the Ph.D. program in inorganic chemistry at the University of Wisconsin-Madison.

“In my freshman year I had general chemistry with Professor Frost, and I remember he was an excellent teacher and was an approachable professor,” says Wong, who worked in Frost’s lab in the spring semester of his sophomore year until he graduated last spring.

After his initial experience with Frost, Wong asked if he could join Frost’s research group.

“I don’t think I could have come as far as I have without Dr. Frost’s guidance in chemistry,” Wong says. “After a year of working on my undergraduate research project and some good results, I asked Dr. Frost if I could write the manuscript for my project. Dr. Frost accepted and provided valuable advice during this process regarding methods of conducting literature research, organizing my data and results, and writing style.”

The manuscript eventually was published – with Wong’s name first in the reference – in the journal Inorganic Chemistry. Wong also presented the paper at the Northwest Regional American Chemical Society conference.

Says Wong: “It was Dr. Frost who encouraged me to give an oral presentation and looking back on this, the process of creating, practicing, revising and executing the presentation was a very valuable learning experience. Conducting undergraduate research with Professor Frost has made me a better scientist.”

For his part, Frost prefers that credit be given his students, as well as fellow faculty members in the Department of Chemistry, where, he notes, several other faculty members encourage undergraduate students to do research.

Says Catalano: “I am sure Brian would continue to do this even if nobody noticed, but it sure is nice to see him get the recognition he deserves.”

Kelly Cross named one of the 1,000 Inspiring Black Scientists in America

Cell Mentor named Cross on the list designed to "dismantle the myth that outstanding Black scientists make up a small percentage of the scientific community."

A presentation by Dr. Ann Weber for International Women's Day

The Society of Women Engineers connects students with industry

Evening with Industry brought 65 students and 11 companies together to help students and new graduates prepare themselves professionally to become engineers.