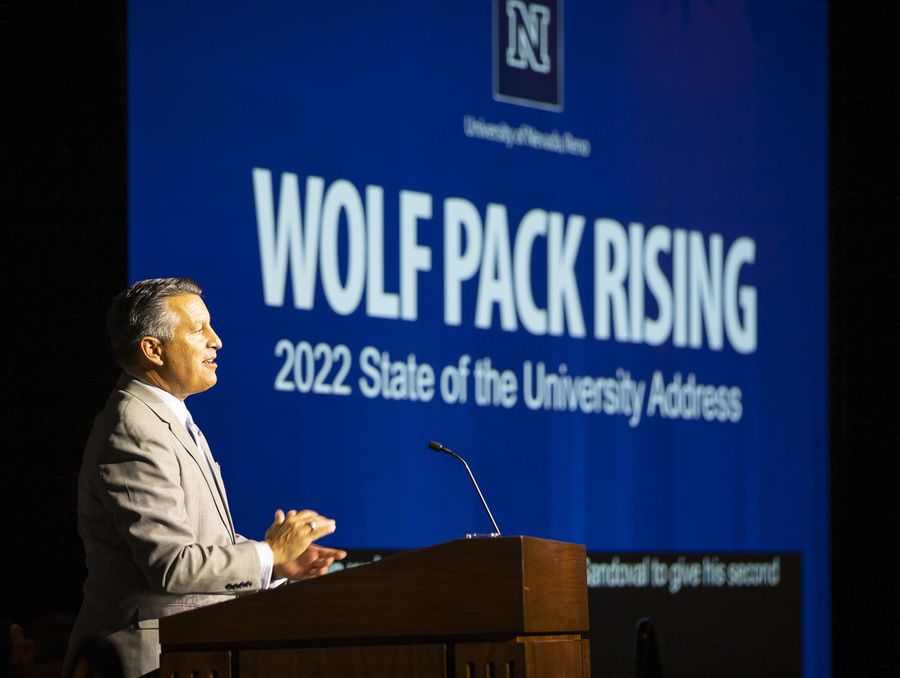 Throughout his “State of the University” address on Thursday, President Brian Sandoval stressed how the accomplishments and achievements by students, faculty and staff over the past year have made a compelling case regarding the University’s value to the state.

During his 33-minute address in the Glick Ballroom of the Joe Crowley Student Union, Sandoval said the University’s excellence in all areas of its institutional mission – as well what he termed the people of the University’s “sacrifices and hard work over the past two-plus years” – will be at the forefront of the University’s budgetary requests when the Nevada State Legislature meets in February.

Chief among the requests will be a restoration of the University’s budget to pre-pandemic levels; a cost of living adjustment for the coming biennium for faculty and staff; a capital improvement request for funding for a new Life Sciences Building; increased state funding for graduate student stipends.

“We are a University that is rising,” Sandoval said. “We are elevating academic opportunities, integrating into our communities and providing infrastructure to better serve our faculty, staff and students. We want the road to success to lead to the University of Nevada, Reno.”

Sandoval also acknowledged that with everything that is being asked of the people of the University, it was imperative that, “Knowing that our people make the difference, I really want to emphasize the obvious – we can’t afford to lose good people, or miss the opportunities to recruit the best and brightest to our campus. It’s just that simple.”

Sandoval said the past year has seen significant and that “history-making” progress has been made in a number of key areas.

He noted that the ongoing Mathewson University Gateway Project is continuing to reach important milestones. He said construction of the new 814-spot Gateway Parking Complex on the south end of campus was nearing completion, and that the recent news of a new 120,000-square-foot Business Building, which would be built on the south end of campus not far from the soon-to-be renamed “University Way,” will give the campus a new “front door” and would prove to be “a game-changer for the University and the community.”

“The 120,000-square-foot College of Business Building will serve faculty, staff, students and the community with state-of-the-art facilities that are second to none,” Sandoval said.

Sandoval also praised the efforts of the University and of the former Sierra Nevada University in Incline Village in completing what he termed “one of the most ambitiously complex endeavors our University has ever undertaken” with the creation of what is now known as the University of Nevada, Reno at Lake Tahoe.

The process started a little more than a year ago, with the transfer of SNU to the University. It included strict federal and state educational regulatory body oversight, as well as the collaboration and cooperation of students, faculty and staff at SNU as well as the SNU Board of Trustees and the approval and support of the Nevada System of Higher Education Board of Regents and the University Foundation.

The effort was worth it, Sandoval said as he welcomed “several hundred” students, faculty and staff to the Wolf Pack Family.

“We are deeply grateful to include the Wayne Prim Campus at Lake Tahoe as part of the University of Nevada, Reno,” Sandoval said. “The new campus will provide our students and faculty with one of the most beautiful, inspiring and important learning environments in higher education today.

“The location will accelerate our University’s leadership position in the areas of sustainability and the environmental sciences.”

Of the University’s total enrollment of 20,945, Sandoval said that “19,582 are on our Reno campus, with 72 percent of our student body coming from Nevada.”

Although the University has seen its most diverse freshmen class ever, with 49.1 percent of this year’s first-year students identifying as students of color – and, notably, that the number of international students on campus is beginning to increase again after slumping during the pandemic – Sandoval said the University must “take every opportunity we can to bring students to our campus.”

The concurrent enrollment initiative, he said, has been a way for the University to “reach out to the next generation of Nevada students in a new and inspiring way.”

Sandoval said he looked forward to future discussions that would explore “these and other initiatives” with new Washoe School District Superintendent, Susan Enfield, who was in the audience on Thursday.

Sandoval said that even with notable student, faculty and staff successes, as well as the second-largest fundraising year in the last 15 years by the University’s Advancement team and a record year of $180 million in Research, the University’s Fiscal Year 2023 budget was still facing a 12 percent general fund budget reduction.

The total cut once stood at $24.8 million but has been reduced to $16.8 million with the help of federal relief funds. The figure also includes a registration and tuition shortfall due to reduced enrollment, as well as a performance pay merit award of $2.7 million for faculty and administrative professionals.

“While there is no doubt in anyone’s mind that this merit award for our hard-working faculty and administrative staff was long overdue, there is the budget reality that no additional funds were appropriated for this and existing dollars had to be reallocated,” Sandoval said. “The result was the permanent elimination of 26 budgeted but vacant positions.

“This institution has weathered budget pressures before, and we will persevere through this challenge as well. Our next step will be in partnership with the governor and legislature when they meet in session next February.”

Other highlights of the address included:

Collaborative alliance with Great Basin College in Elko: “I need to really emphasize that is a collaborative alliance … a continued sharing of key resources and capabilities in areas like Human Resources, Legal Counsel and Police Services,” Sandoval said. “GBC is at the heart of Elko and other rural Nevada communities, and always will be. … What makes this alliance so exciting is how it will enhance our ability to create even more partnership opportunities between our two institutions. We’re already doing this in the form of the anticipated Mining Center of Excellence at GBC, which is a collaboration between GBC and our internationally recognized Mackay School of Mines.”

Campus infrastructure growth and improvements: Sandoval praised Gov. Steve Sisolak and the Nevada Legislature’s Interim Finance Committee for their approval of a $75 million appropriation for the construction of a new Nevada State Public Health Laboratory on campus. The construction of the new facility will create new opportunities not only for the University’s research enterprise, but also will mean that new space will be available for existing academic faculty. “This high-tech research facility will be one of the finest in the nation and bring even more research opportunities to our Schools of Medicine and Public Health,” Sandoval said. An additional $3 million appropriation will be used to remodel the old State Public Health Lab, for eventual use by the School of Public Health. Work on the old Facilities Building, located between the Mackay School of Mines and the Ansari Business Building, should be completed in the summer. Once work is completed, Sandoval said, the Facilities Building will house the School of Social Work and “give its faculty a new home in the heart of campus.”

Strategic plan completed: Sandoval praised the work of a number of groups who came together to synthesize what he termed “the ideas of an entire campus” in the form of the University’s Strategic Plan, “Wolf Pack Rising,” which was approved by the Board of Regents in June. “The creation of our Strategic Plan helps us take a clear-eyed look at our institutional strengths,” Sandoval said. “It pinpoints areas of potential growth as we meet the challenges of our time and opportunities for the future. It will, going forward, help us direct our resources and planning efforts for the realization of an ambitious future.”

Sandoval said that even with a number of challenges facing the University for the coming year, he was confident that the University’s people would rise to meet them.

“We are the Wolf Pack Family,” he said, “and all of this work is still far from done. … I am eternally optimistic that we will continue to emerge from these difficult days stronger and better than ever before. This is part of our legacy. This is part of the exciting history we are still to write.”