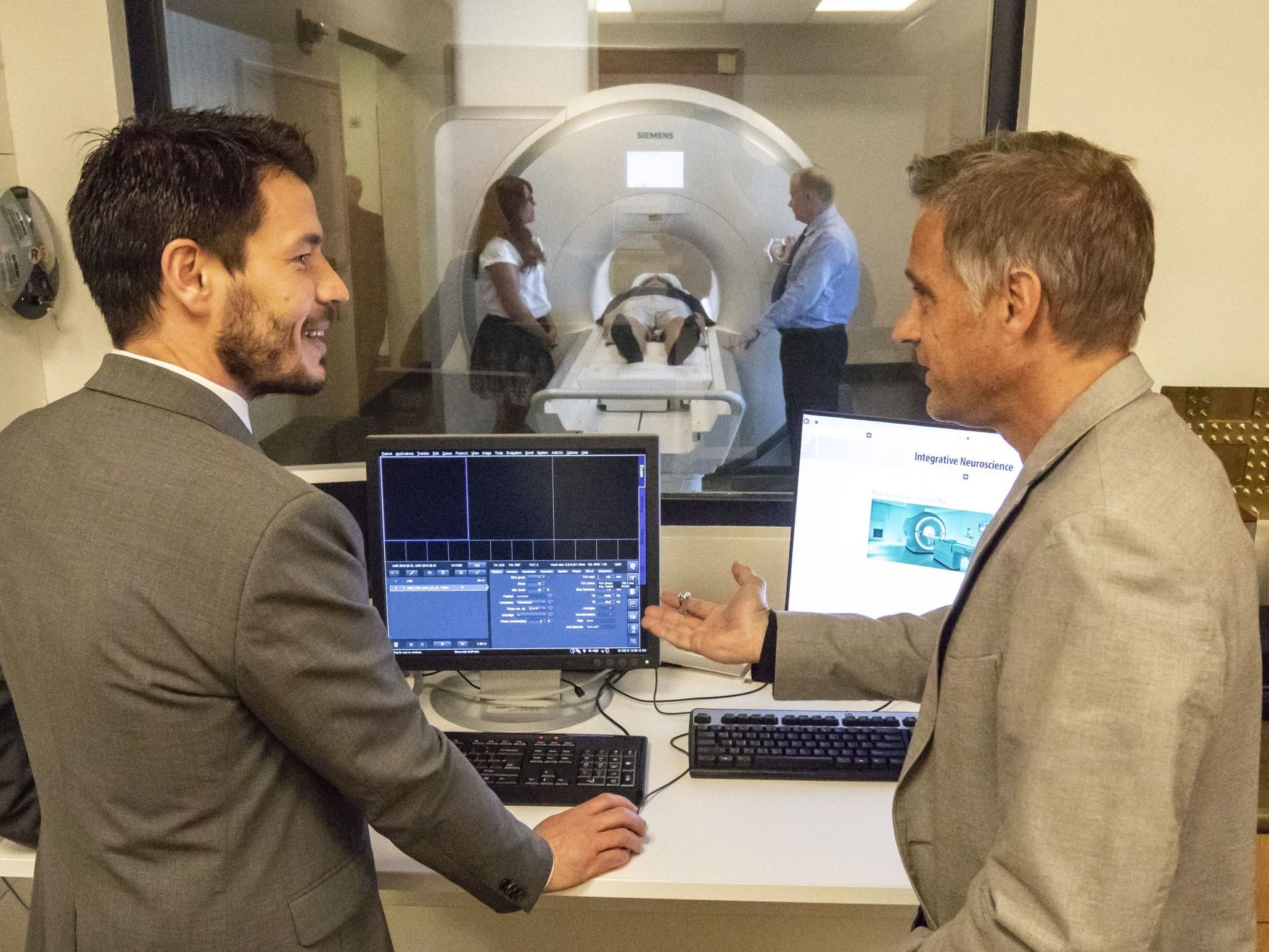 The Center for Integrative Neuroscience at the University of Nevada, Reno has received a $5.3 million, competitive Phase 3 award through the Centers of Biomedical Research Excellence (COBRE) program.

The COBRE is a National Institutes of Health (NIH) program to support the establishment of innovative research centers through awards for three sequential five-year phases. Since receiving an initial COBRE Phase 1 grant in 2012, the Center for Integrative Neuroscience has dramatically elevated the scope and impact of neuroscience research and education at the University. The Phase 3 award is designed to further solidify and sustain these accomplishments far into the future.

Led by Director Michael Webster, Foundation Professor of psychology in the College of Science and principal investigator for the COBRE, the multidisciplinary center has involved several colleges, numerous departments, dozens of faculty members and hundreds of students. The COBRE has also benefited throughout from the administrative support provided by Program Manager Leann Kumataka. Key impacts through Phase 2 include:

An additional and fundamental achievement of the neuroscience COBRE has been establishment of the Institute for Neuroscience. Directed by James Kenyon, emeritus professor of physiology & cell biology and former senior associate dean for research at the School of Medicine, the Institute for Neuroscience is housed under the Office of the Provost and provides an administrative structure for bridging the training and research efforts in neuroscience and leading new initiatives in the field. During his career, Kenyon helped develop many of the institution-wide NIH awards for building the University’s biomedical footprint, and as director of the Institute he has led efforts to bring NIH training grants to elevate the educational opportunities for both undergraduate and doctoral students in the field. His enthusiasm for neuroscience led him to come out of retirement to serve as the Institute’s inaugural director and chart its mission.  Plans are in place for a national search to identify the next director of the Institute to carry his efforts forward.

The Institute for Neuroscience was created in 2019 with an initial University investment of $500,000, almost all of which has gone toward student support and outreach. Webster says the creation of the Institute demonstrates the University’s commitment to building on the COBRE investment to achieve lasting excellence in research and training in the brain sciences.

“In science, especially neuroscience, the next big advances are likely going to come from teams who can bring complementary skills to solve problems,” said Webster. Because of this, the Center for Integrative Neuroscience was “developed to be very inclusive. We really tried to build a community from psychology to engineering, biology, math and beyond. We have encouraged networking and bringing people together.”

The result has been a high level of multidisciplinary collaboration spanning a wide range of questions. For example, COBRE-supported teams involving faculty between biology, biochemistry, mechanical engineering and philosophy have formed to understand odor perception in both insects and humans; between public health and psychology to explore the consequences of concussions in school athletes; and between psychology and computer science to understand how the brain responds to virtual reality or can better adapt to new environments.

“Since its beginning, the Center for Neuroscience has emphasized multidisciplinary collaboration,” said Katherine McCall, dean of the College of Science. “It’s a tremendously successful model and has demonstrated the kind of far-reaching impact that can result from collaborative science and teaching.”

The infusion of investigator funding has also helped elevate hiring of a critical mass of faculty and supporting their development. “These faculty have been very successful in moving beyond the COBRE support to secure their own grant funding to establish their independent research programs,” said Webster.

The list of successes by these early-career faculty is long. Examples of these COBRE-supported investigators include Jennifer Hoy, assistant professor of biology, who went on to receive an NIH R01 grant examining the neural circuits controlling predator and prey behavior; Jacqueline Snow, associate professor of psychology, who received an NIH R01 grant to study how the human brain responds to real objects versus images; and Jenny Ouyang, associate professor of biology, who received an NSF CAREER award to examine the consequences of modern light pollution on physiology and brain function in birds. Many of these faculty who received initial COBRE support are now mentoring the next generation of investigators.

The Institute for Neuroscience is also developing the student talent pipeline to train future neuroscientists. The Maximizing Access to Research Careers (MARC) Nevada program is an NIH-sponsored training initiative to help a diverse pool of undergraduates complete their baccalaureate degrees and prepare for graduate school and careers ahead. The project proposal was developed by Kenyon and Associate Professor of Psychology and College of Science Associate Dean Melanie Duckworth. Launched in 2022, the program has four Principal Investigators: Duckworth, Professor of Biology Thomas Kidd, Associate Professor of Microbiology and Immunology Mary Burtnick and Associate Professor of Chemistry Wes Chalifoux.

“Having a MARC award gives undergraduates rare freedom to pursue research in an unparalleled manner,” said Kidd. “Coaching through a dedicated course helps them identify goals from research areas to future funding, and importantly emphasizes rigor and ethics in research.”

‘Neuroscience is changing everything!’

As the science of the brain and the nervous system has expanded, new areas of research and career opportunities are emerging.

“There are careers forming that don’t even have a name yet, as well as many opportunities in the obvious areas: healthcare, biotechnology, education, academia, law, government and more,” said Kidd.

“Neuroscience is changing everything,” he said. “For example, understanding that social stress is processed by the brain in a similar manner to physical pain changes how we approach many conditions, whether it is bullying or chronic pain.”

Of his own discipline, Webster said, “The term ‘psychology’ is often narrowly associated with counseling. It’s important to understand that there are many other sides to psychology – cognitive science, neuroscience and behavioral science. In psychology we are trying to understand how the brain works and that includes basic cognitive abilities such as seeing, perceiving, thinking, remembering and making decisions.”

“Many new industry opportunities are also opening up, really exciting ones, especially with the emergence of concurrent developments of big data and machine learning, and the application of artificial intelligence to solving problems,” said Webster.

Complementing the growth of neuroscience investigators and research funding has been the development of core facilities and infrastructure that provide equipment and expertise for different areas of neuroscience research. Three core research centers were developed during Phase 1 and 2 of the COBRE and a fourth is being added in Phase 3:

Each of the cores provides state-of-the-art equipment, technical support and training to investigators, and is available to faculty and students throughout the campus to facilitate their research.

A matter of investment

The three phases of COBRE support have brought more than $25 million in NIH funding to the Center for Integrative Neuroscience.

“The breadth of this long-running program is far-reaching,” Jeff Thompson, executive vice president and provost, said. “It’s an impressive investment, but more importantly this program is impressive in its impact to research and education as well as development of early-career faculty. The inclusion of undergraduates in the research programs fuels a tremendous amount of success in developing future scientists, and not just in one college.”

The COBRE program is administered through the NIH’s National Institute of General Medical Sciences (NIGMS), and is a component of the Institutional Development Award (IDeA) program. The University has a second active Phase I COBRE in Molecular and Cellular Signal Transduction in the Cardiovascular System, directed by Scott Earley, professor of pharmacology at the School of Medicine. A complementary IDeA Network of Biomedical Research Excellence (INBRE) award links the University with other NSHE partner institutions to promote biomedical research and education throughout the state, and is directed by Josh Baker, associate professor of pharmacology at the School of Medicine. Previous COBREs at the University and continuing areas of expertise include the Center for Smooth Muscle Plasticity, led by Kenton Sanders, professor and chair of physiology & cell biology; and the Center for Cell Biology of Signaling Across Membranes, directed by Chris von Bartheld, professor of physiology & cell biology. Webster noted he was very grateful for the guidance and help he received from the previous COBRE directors in developing the neuroscience COBRE.

Funding for COBREs is highly competitive. “It is impressive and somewhat unusual to advance through all three COBRE phases with the applications funded on the first try,” said Kenyon. “This means the Center for Integrative Neuroscience is achieving the NIH and NIGMS goals of advancing science and education for the betterment of Nevada and the world.”

“This is a prime example of what Wolf Pack pride is about; we should all be proud of the cross-disciplinary collaborations in discovering and exploring new frontiers in this broad discipline of neuroscience,” Thompson said.