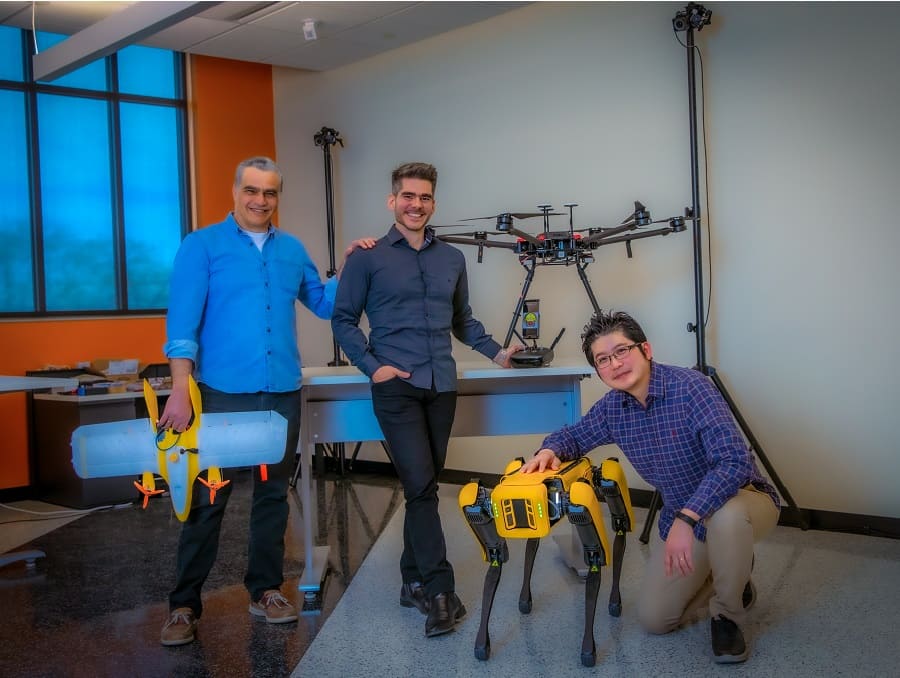 Flying cars could be in our future, but the work to make it happen safely is just beginning.

That includes a project expected to start this summer at the University of Nevada, Reno.

Researchers from the University’s College of Engineering are part of a team recently selected for NASA’s University Leadership Initiative (ULI), a program developed to support NASA’s aeronautical research goals.

Petros Voulgaris, chair of the Mechanical Engineering department and Aerospace Program director, and Christos Papachristos, Computer Science and Engineering assistant professor, will work with colleagues from the team’s lead institution, the University of Illinois, Urbana-Champaign and additional team members from Georgia Tech, Massachusetts Institute of Technology, North Carolina A&T State University as well as industry partners Sierra Nevada Corporation (SNC) and Lockheed Martin. That team is one of four in the ULI program.

The group is working on a three-year project to develop a framework that effectively guides autonomous aerial vehicles when they face uncertainties or abnormal situations, in order to ensure a safe flight.

“The big vision, of course, is you want to have flying cars,” Voulgaris said.

And of course, you want flying cars to fly safely and efficiently.

Voulgaris said the team will be developing and testing algorithms that govern how an unmanned aerial vehicle recognizes a less-than-optimal situation and how it reacts, whether that is returning to its original position or finding and landing in a safe place. In particular, the team proposal is to develop a robust and resilient autonomy (RRA) framework with principled and verifiable architectures to deal with uncertainties and off-nominal situations to enable safe and efficient advanced air mobility. Voulgaris’ team includes research associate Hyung Jin Yoon, an expert on artificial intelligence for autonomous vehicles.

Papachristos, and his Robotics Workers Lab, which specializes in autonomous systems and field robotics in Unmanned Aerial Systems, says the project will deploy and validate a number of autonomy and resilience functionalities for autonomous aerial vehicles.

“It’s through a combination of technologies that we aim to enable the vision for a new generation of aerial personal transportation systems, safely and reliably integrated in the airspace and the urban (aerial) mobility infrastructure,” Papachristos said.

SNC will bring further expertise to the project, particularly by providing the team access to an applicable real-world scenario and simulation model for manned and unmanned airborne systems. This simulation environment will leverage SNC’s fielded enhanced vision system for assisting helicopter pilots to develop high-fidelity sensor input, model dynamics and environments. This simulation capability will allow the team’s algorithms to be developed and tested in real-world scenarios and provide a pathway to putting the final capabilities to use on real systems beyond the laboratory.

Working with industry and other academic institutions on this NASA project is an achievement.

Since the ULI team formed, Carson City-based company Resolute ISR also has joined the effort: the company, which manufacturers Resolute Eagle, an unmanned aircraft system platform, will select four University engineering students as interns to train as drone pilots, with plans to add another four by the end of 2022. That development helps to expand the opportunities available to students through the College of Engineering.

“The College of Engineering is committed to the development of an aerospace engineering program and is advancing its accomplished robotics program,” Manos Maragakis, College of Engineering dean, said. “Our selection to ULI will provide our faculty and students with new nationally collaborative opportunities for research and broader education, and I am grateful to our team for this major accomplishment.”

The University is positioned advantageously to do this type of research. Nevada is one of seven states designated by NASA as a center for the development of unmanned aerial vehicles and outdoor testing of unmanned autonomous systems. The project also has the support of the Nevada Governor’s Office of Economic Development (GOED), which helped facilitate development of the project proposal and the involvement of Resolute ISR.