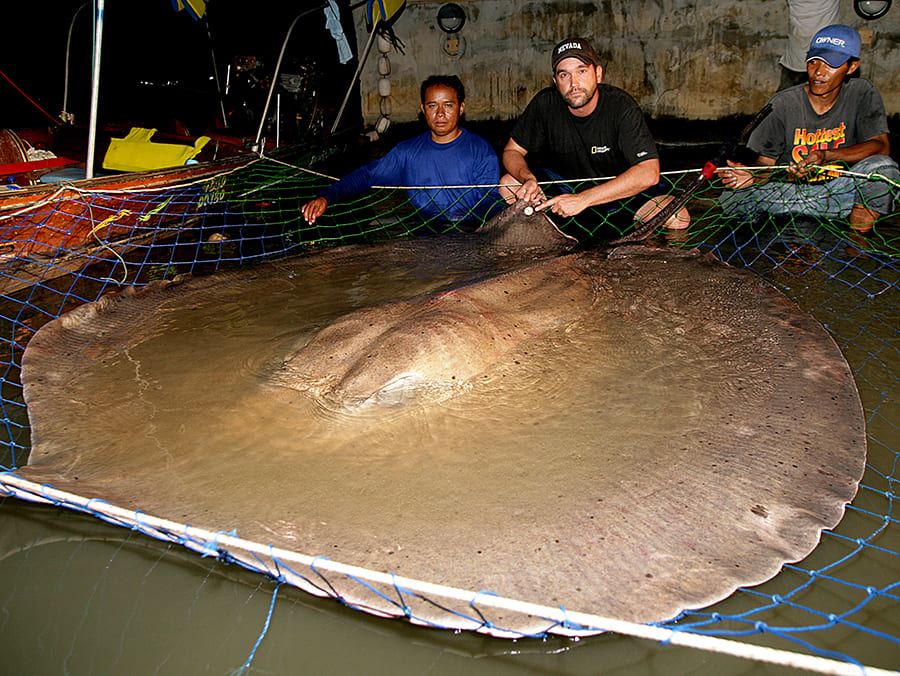 Entering an unexplored world of darkness, a team of renowned underwater explorers will be descending this week, April 22-27, into depths as much as 250 feet (75 meters) below the surface of the Mekong River in Cambodia. The deep-water habitats are critical areas for fisheries and livelihoods and may be a last refuge for the world's largest freshwater fish and endangered dolphins.

"To commemorate Earth Day 2022, and in recognition of the critical importance of the Mekong to people and aquatic life, we will be exploring the depths of the Mekong," Zeb Hogan, a Department of Biology fish biologist and project lead of the USAID-funded Wonders of the Mekong project, said. "We are exploring deep in the Mekong, another world – a realm within a hidden realm, a pitch-black space dominated by rare and unusual fish like the Mekong giant stingray and giant catfish."

The study area that the scientists will focus on is located just downstream of a Ramsar wetland of international importance. The region is dominated by flooded forests, rocky outcrops, sand bars, braided channels, deep pools and rapids and riffles. This area also is home to many of the Mekong's more than 1000 fish species, including the bizarre two-faced carp, giant goonch catfish, and striped catfish, once a staple food in Cambodia.

Researchers believe that these areas are critically important as dry season fish refuges and important spawning areas, and perhaps as the last habitat of endangered giant fish. It is a region that is recognized as special and protected by local communities.

To study these important areas, College of Science's Hogan and project co-principal investigator Sudeep Chandra, director of the University of Nevada, Reno's Global Water Center, have teamed up with biologists from the Fisheries Faculty of Royal University of Phnom Penh, deep sea researcher Kakani Katija and her research team from the Monterey Bay Aquarium Research Institute, and Kenny Broad, University of Miami professor, environmental scientist, cave diver and a 2011 National Geographic Explorer of the Year. They are specialists in the exploration and study of extreme underwater habitats.

"The biggest challenge will be getting down to the bottom," Hogan said. “Its deepest areas are below sea level. Besides being dark and silent, the waters could be obscured by particulates.

The deep pools are representative of the Mekong's aquatic ecosystems generally: diverse, globally significant, poorly understood and under threat.

"They are unseen worlds, underappreciated and out of sight,” he said. "The deep pools may harbor new species, and could be resting spots for schools of migratory fish, concentrating in advance of their upstream migration over the Khone Falls in neighboring Laos."

For the exploration, the team will use unmanned submersibles equipped with lights and cameras, drop cameras suspended on long cables, and baited video cameras as their eyes and ears. To assess the foreign environment, equipment that measures depth and flow and map the river bottom and current will be set out. They will sample environmental DNA to look for rare or unknown species and will set up a telemetry array to monitor fish migrations through the deepest areas.

The team's basecamp will be adjacent to one of the Cambodian Mekong's deepest pools and a fish reserve designed to protect spawning fish. The area itself is dotted with islands occupied by small fishing camps, nomadic fishers that move from island to island, season to season. Upstream across the border in Laos is Khone Falls, the Mekong's only main channel waterfall.

"We'll be working with fishers who have detailed knowledge of the area," Hogan said. "They tell stories of catching record-breaking stingrays and other giant fish; this is the area where a 310-pound stingray was caught last month."

Hogan said that these deep pools may even have the potential to be used as an introduction site for endangered fish similar to what the Wonders of the Mekong team did last month in the Tonle Sap Lake, introducing several species of endangered big fish, up to 1,500 fish in all, to a fish sanctuary in an effort to boost populations. The group will also be evaluating the site as an eventual field station, to be established in the next year.

"This is one of many Wonders of the Mekong projects that seeks to protect a healthy, connected river, and the people, fisheries, wildlife, and water quality that river supports,” Chandra said. The cooperative project with USAID, and local organizations are working with communities who want to protect the river and build more resilient communities threatened by upstream dams and proposed new dams in the area.

There are plans to build several dams in Cambodia’s portion of the river, which will have devastating ecological effects and could seriously threaten local food security in an area of the world already impacts by changing climate. Mekong fish provide 76 percent of protein consumed in Cambodia. The Mekong countries have long been tapping their natural resources for economic growth and have installed numerous dams for hydropower and other purposes.

“The accelerating pace of development and dam-building, coupled with cumulative impacts of transboundary stressors and the impending impacts of climate change, point to a common concern among those who work and live in the lower Mekong River Basin: a fear that the river, which is the lifeblood of most of Southeast Asia, will gradually become so fragmented that it will lose function, and thus no longer support the huge diversity of wildlife and millions of people that depend on it,” Chandra said.

"The existence of these places - like the unseen world of the Mekong's deep pools and the animals that live there - are a true underwater wonder and one that warrants our attention, care, and protection," Hogan added.

The Wonders of the Mekong research is in partnership with the Cambodian Fisheries Administration, the Royal University of Cambodian, and local communities and rangers of the Stung Treng Ramsar site.