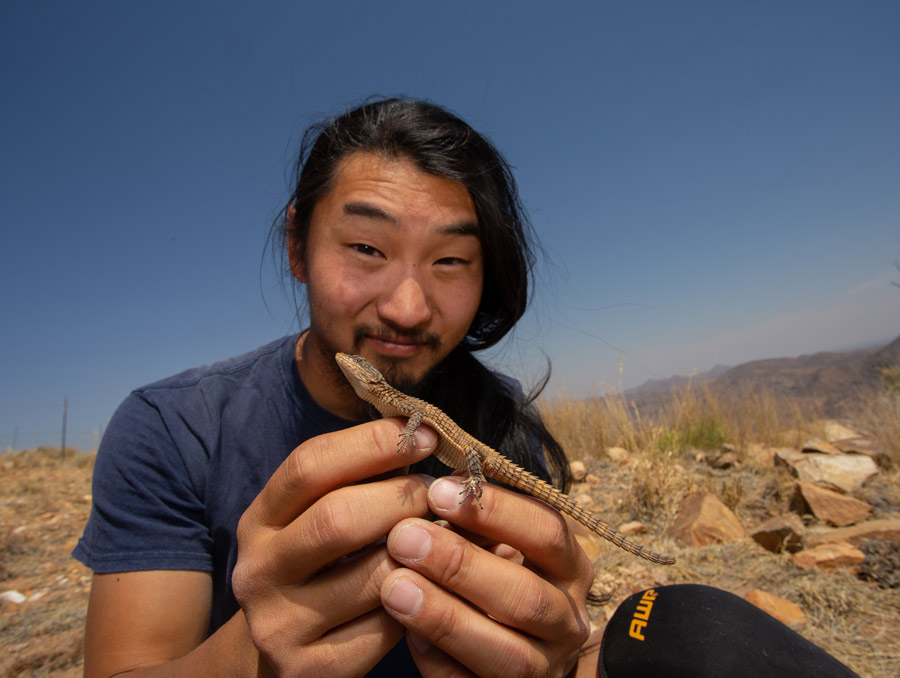 Graduate students Jonathan DeBoer and Joshua Hallas study a species of lizard known as the Herero girdled lizard in Namibia, and recently published an observation of the lizard exhibiting tail-biting behaviors. This was the first time the behavior has been reported in this species of lizard.

Lizards have unique ways of defending themselves from predators. A common method in the Sierra Nevadas is for lizards to drop their tails, which can distract a predator while the lizard escapes. Some lizards evolved an instinct to bite their own tails. Tail biting has different benefits, depending on the species. Another species uses this technique to make themselves bigger so predators can’t fit the lizard in their mouths. The Armadillo girdled lizard uses this technique to expose its sharp armor, so the predator is discouraged from trying to eat the lizard.

“I was surprised to see the individual bite its own tail because I knew the Armadillo girdled lizard displayed the tail-biting behavior, but it was not recorded in my study species, the Herero girdled lizard,” DeBoer said.

DeBoer and Hallas perform research with Department of Geography Professor and Senior Vice Provost Jill Heaton. Heaton said the types of animals that may prey on this lizard, including snakes and baboons, could access the rock crevices where these lizards live. This tail-biting behavior may prevent the predators from being able to pull the lizards out of the crevices.

"We still see things out there in the natural world that we haven't seen before, and they're important to document."

Tail-biting appears to be rare in this species of lizard. The researchers have handled over 400 lizards in the wild, but have only seen the behavior twice, said Heaton.

Speaking to the apparent rareness of this behavior in the Herero girdled lizard, DeBoer said, “I would speculate other defensive strategies, such as running away, may be more effective, since they are faster with thinner body armor and are faster runners than the Armadillo girdled lizard.”

“We were excited to report this behavior because one of our research goals is to document and publish natural history information on the Herero girdled lizard because very little is known about the species other than information surmised from evolutionary relationships,” said DeBoer. Hallas agreed, saying he was glad to be part of the publication.

Heaton said it’s not uncommon to find new behaviors in animals. “Many species around the world, and in Namibia for that matter, including this species, have been virtually unstudied,” Heaton said. “These types of publications are critical. They work as clues for other scientists that we can piece together to start better understanding how and why species operate the way they do. We still see things out there in the natural world that we haven’t seen before, and they’re important to document.”