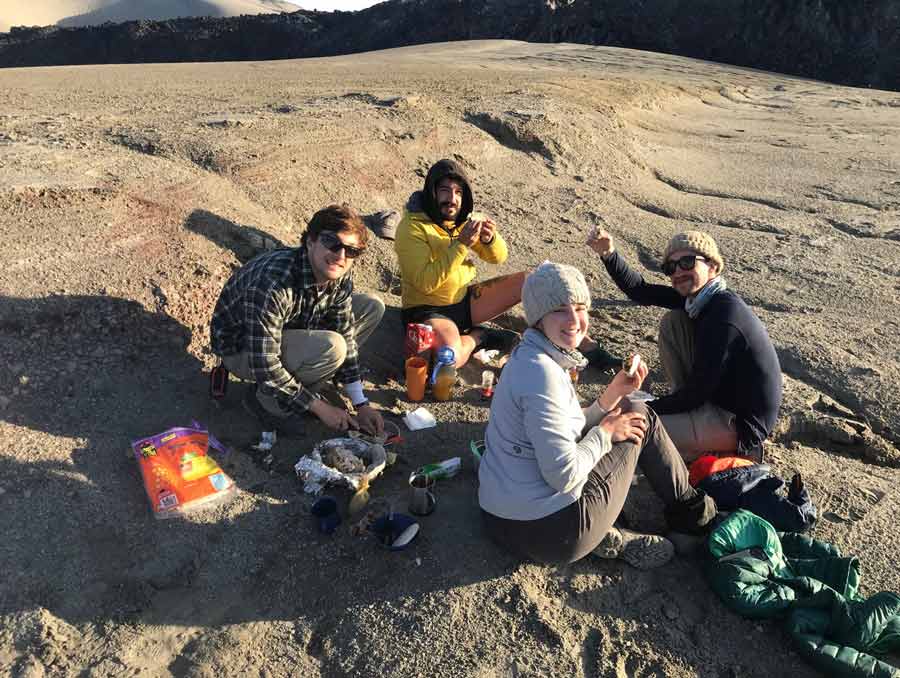 Geochemist and associate professor in the Department of Geological Sciences and Engineering Philipp Ruprecht has been studying the Puyehue Cordón Caulle volcano in Chile for the past six years. How that research led him and his graduate student Heather Winslow to test out a new cooking method is a complicated story, but one that ends with well-seasoned chicken legs and a new theory for how volcanos work.

The Puyehue Cordón Caulle volcano last erupted in 2011 sending ash all the way to Buenos Aires over 900 miles away. However, the hugely explosive eruption transitioned to what volcanologists call an effusive eruption marked by a heavy flow of lava and less explosive ash. Ruprecht offers several analogies for understanding the nature of volcanoes, including a shaken-up soda bottle being opened (explosive) or imagining magma as honey. While gas bubbles would struggle to escape cold, viscous honey and would grow until the big bubbles popped (explosive), warmer less viscous honey would allow gas bubbles to join and escape more slowly and without much of a bang (effusive). Most volcano eruptions can be categorized as either explosive or effusive. The Puyehue Cordón Caulle eruption is unique in that it was both, and almost equally so. It is this unique characteristic that drew Ruprecht to study the volcano in the first place. He wanted to know how it started and why it made its transition from explosive to effusive.

“This was our driver to go Puyehue Cordón Caulle,” Ruprecht said. “In the past, people have always argued that if new magma comes in, it will disrupt the system, creating catastrophic bubble formation and explosion. We had this theory that if an intrusion of new magma was so effective that it reheats the entire magma body, it may slow the explosiveness down.”

Ruprecht went to Chile to test this theory. If he could find evidence that new magma had come in, this could explain the shift mid-eruption to the effusive lava flow. The team was the first to find evidence of new magma in the lava fields surrounding the volcano in the form of bits of lighter colored lava rock, or mafic inclusions, representative of newer magma straight from deeper in the Earth’s crust being mixed into the older lava flow. However, these inclusions were so rare, they determined it was unlikely there was enough new magma to make any real impact on the volcano’s behavior. While the original theory was debunked for the Puyehue Cordón Caulle eruption, this, according to Ruprecht, is where things got interesting.

“In the last six years, our view on this has changed significantly,” Ruprecht said. “The answer to how this volcano was triggered, unfortunately, we don’t have an answer to that question. But the mafic inclusions we found were so distinct in how they looked, they became interesting from a different perspective.”

The uniqueness of the inclusions Ruprecht and his team found led to a new theory about how volcanic and magma systems work in general. A body of magma is believed to be made up of mostly a “crystal mush” – a sort of slurry of liquid and crystallized magma. But the mafic inclusions Ruprecht found led to a new thought that a layer of pure liquid top sits above the crystal mush.

“What we’ve realized is that at the top of this crystal mush is a liquid top, basically your mobile lens that can actually erupt,” Ruprecht said. “That liquid top is getting fed from melt that is in that crystal mush.”

The mafic inclusions they found around Puyehue Cordón Caulle, they now believe, are ripped up pieces of the underlying mush. By studying the inclusion characteristics, they can get a more clear understanding of how this layered system works.

“This gives us a way to study what the underlying system of this melt lens may look like,” Ruprecht said.

Now, Ruprecht is asking if that liquid top is so full it can erupt multiple times or if eruptions occur when it the liquid magma is replenished enough to cause an eruption and how easily that replenishment happens. The answer to this question could explain Puyehue Cordón Caulle’s three eruptions in the past 100 years but could also inform eruption timelines for volcanoes around the world.

And now for the chicken. The Puyehue Cordón Caulle 2011 eruption had another unique characteristic potentially related the change in eruptive behavior. During the eruption, some of the magma spread out from the volcano just under the earth’s surface, buckling the ground up. The sub-surface magma intrusion heated the earth above it and that ground is still hot today. Digging a hole just a foot down in this area will expose temperatures hot enough to cook chicken.

“We don’t know what form that magma is in – if it has been cooled enough to crystallize or if it is still in its liquid form,” Ruprecht said. “We would love to drill down and find out, but that is not so easy to do.”

For now, the team has settled for using the unique characteristics of the Puyehue Cordón Caulle volcano to attempt to answer long-standing questions about how, when and why volcanos erupt, and to make a tasty lunch while working in the field.