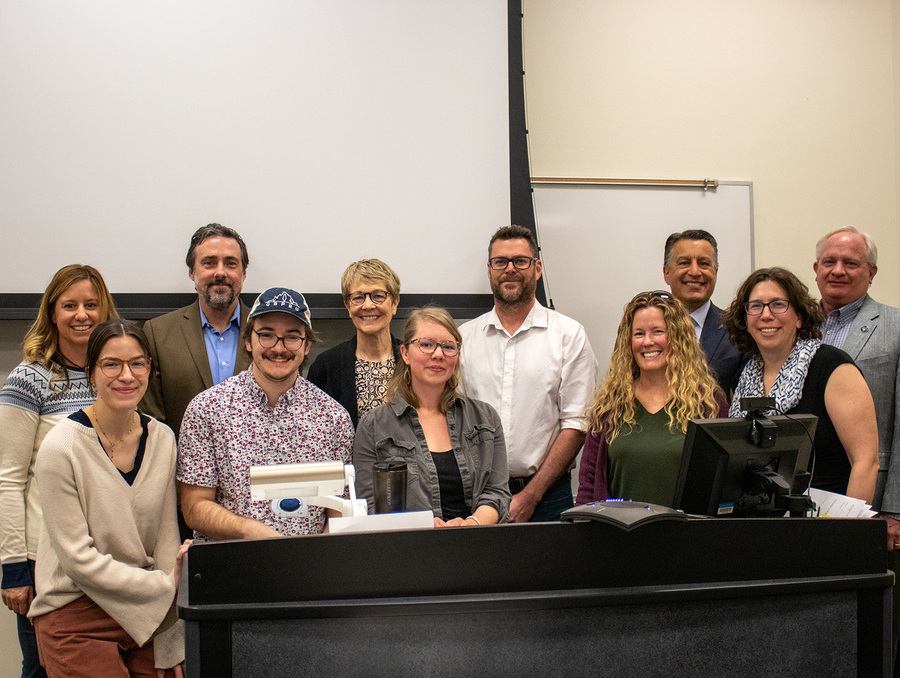 All teaching awards are special, as they all represent the transformational ways a professor connects subject matter to the lives of the students they are teaching.

But what makes the Paul and Judy Bible Teaching Excellence Award unique among the teaching awards that the University presents each spring is that the nominations come from the students. Students make their nominations each fall, and then the nominees are observed by a committee, with the award finally presented sometime during the spring semester.

That’s why 2022 Paul and Judy Bible Teaching Excellence Award winner Geoff Smith was so genuinely moved earlier this month when President Brian Sandoval, College of Liberal Arts Dean Debra Moddelmog, Director of Teaching Advancements Sarah Cummings, several of his colleagues and some of his graduate students all barged into Smith’s Anthropology 350 (“The Archaeology of Nevada”) class to announce that Smith had won the award.

Winning teaching awards is nothing new to Smith, an Associate Professor of Anthropology. He’s the 2019 recipient of the F. Donald Tibbitts Distinguished Teacher Award and the recipient of the 2021 Regents’ Teaching Award.

Yet Smith said that the Bible Award was made extra special due to how it is in many ways student-generated, and is a reflection of the trust and collaboration that often exists between a teacher and their students.

“The Paul and Judy Bible Award is special because it is student nominated,” Smith said. “This year, my graduate students (Megan McGuinness, Erica Bradley, and Haden Kingrey) nominated me, which was cool. We are very close, working in the classroom, lab, and field together. I do my best to support them in their journeys, and it was nice to learn that they are supporting me in my own journey.

“It is also special because this is the first time a member of the Anthropology Department and College of Liberal Arts has received the award. Finally, it is special because as part of my service on some of UNR's other teaching committees, I have had the opportunity to watch Dr. (Jennifer) Hollander, Dr. (Ann-Marie) Vollstedt, and Dr. (Robert) Ives in action. They're among UNR's very best teachers, and to learn that they view my teaching record favorably is something that is hard to put into words.”

“We nominated Geoff because he’s fantastic,” Kingrey said during the presentation, which surprised Smith so much the professor’s initial reaction was, “Wow.” “He’s always there when you need him,” Kingrey added.

Moddelmog said throughout the six years she has been dean of CLA, what has always struck her about Smith was how hard he has always worked to continually up his game as a professor.

“As good as Geoff is, he always thinks he can get better,” Moddelmog said. “It’s amazing that he’s at the top of his game but he always feels there is more game to get.”

According to Cummings, who herself is a Tibbitts and Bible Award winner, what distinguishes Smith is how he is constantly, as a teacher, striving to “make connections.” This includes finding ways to bring the outside world into his classroom so that his students understand the multitude of experiences, voices and perspectives that are often part of his subject matter.

“Geoff has worked to include a broader diversity of voices in the course, especially Indigenous scholars and Tribal representatives, wrestling with challenging conversations about the history and future of the field,” Cummings said. “Student nominations speak to his thoughtful, responsive, and supportive mentorship. He is a respected colleague who is generous with sharing experiences on teaching-related committees, panels and in professional development events.”

Smith said this semester marked the 11th time he has taught Anthropology 350, having first taught it in 2010 when he joined the University faculty. How the presentation of material has evolved over the years is telling.

“Each year, I reflect on what worked and what didn't work in the previous​ iteration and strive to improve my delivery of the product,” he said. “That involves not only updating the science behind the story, but also putting past and current research into the broader context of archaeology and how the field has changed over the years. In the past few years, much of that energy has been directed at emphasizing contributions by members of historically underrepresented groups to our field, and how archaeologists can do a better job of working with descendant communities.”

And although he has won practically every major teaching award the University has to offer, and that he is forever looking to improve on ways to be the most effective teacher that he can be, Smith added that one thing hasn’t changed over the years.

“I view successful teaching as a journey rather than a destination,” he said. “One of UNR's most accomplished teachers, and researchers, for that matter, Scott Mensing (Geography Department), remarked last year in a similar story that he has the attitude that when he walks into a class, it should be the best class he's ever had.

“I found that perspective really admirable: someone late in their teaching career still endeavoring to make each class the best it can be. I have tried to adopt a similar attitude: I walk into the classroom and give the students everything I have. It's exhausting, and many days I fall short of my desired goal. But once in a while, I fully connect with the content and students and find the space where I want to be. Improvisational musicians often speak in terms of achieving symbiosis with the audience, who feed off the music and in turn drive the musicians to new places. That's what a good day feels like to me. There's no other feeling quite like it. I suspect there are many other instructors at UNR who know what I'm talking about.”

The overarching philosophy that Smith carries into each class is that he never takes anything for granted. He said he feels that he’s “never been a naturally successful student or teacher, but I am willing to work really hard to keep up with those people who are. That involves a great deal of self-reflection and revising course content and delivery methods.”

The “takeaways” Smith has for every course he teachers center around three things.

“First, I want them to leave with a better understanding of what archaeology is and why the study of the human past has merit,” he said. “It is a means of introducing students to the diverse nature of humanity. Second, I want them to walk away feeling like they got their money's worth - that my class was worthwhile. This applies to Anthropology majors, but also non-majors. My favorite student comments are those along the lines of ‘while I'm not an Anthropology major, Dr. Smith's class was my favorite of the semester, and I actually enjoyed waking up in the morning and learning about the past.’ Comments like that let me know that I have reached a broad audience.

“Finally, I want every student to know that I cared about their well-being and personal goals, whether they ultimately received an A or a D in my course. Though most instructors probably did not sign up for that part of the job, it is an increasingly critical part of being a university instructor. Little gestures and gentle nudges can keep students moving forward during these incredibly challenging times.”

Perhaps the best moment during this month’s award presentation came before Smith had even set foot in his classroom in the Ansari Business Building.

The last thing on Smith’s mind as he made his way to class was winning an award. He hadn’t heard anything about the Bible Award for quite some time. he had actually bumped into someone who was heavily involved in the teaching assessment community, and that individual hadn’t said anything about the award, either.

“Gamblers be warned,” Smith said. “They had excellent poker faces.”

Then, as some of the members of the presenting committee, Anthropology Department Chair Christopher Morgan and the students who had nominated Smith were making their way up Ansari’s lengthy stairwell in order to first gather in the CLA Dean’s Office, they actually momentarily ran into Smith as he was headed down the stairs to teach class.

“I asked where they were heading, and they all offered some off-the-cuff excuses that I thought nothing of,” Smith said.

“I teared up when everyone came into the classroom a few minutes later to let me know,” Smith said.