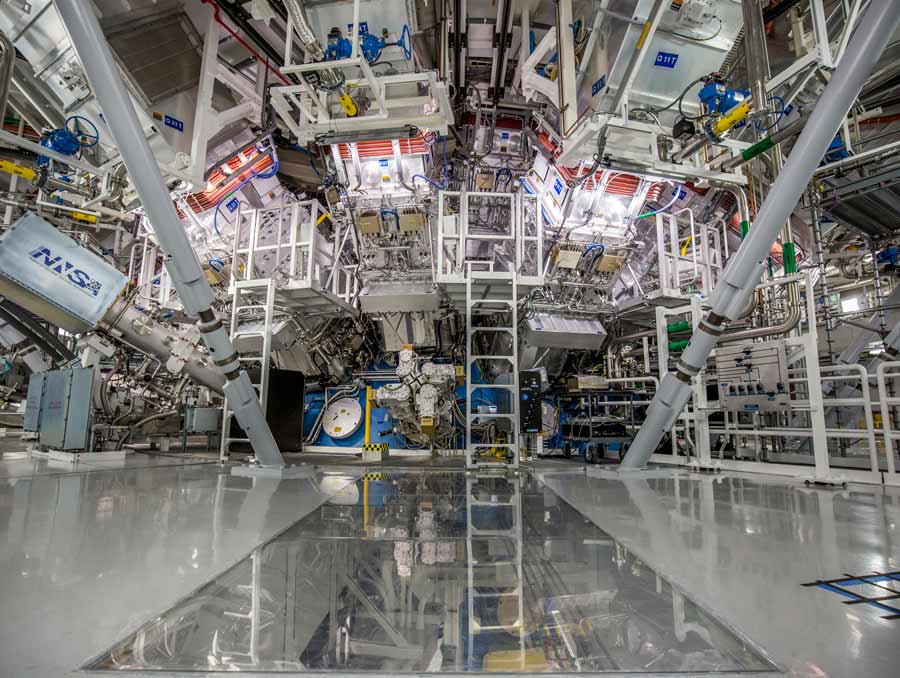 News broke earlier this month that Lawrence Livermore National Laboratory National Ignition Facility (LLNL NIF) had accomplished fusion with a net gain of energy. But many people have accomplished fusion before, including Davidson Academy alumnus Taylor Wilson, who was 14 when he built a nuclear reactor in his parents' garage. He went on to work in the research lab of Ron Phaneuf, Emeritus Foundation professor of physics at the University. Phaneuf and Wilson lay out the reasons the recent fusion breakthrough is anything but typical.

According to Wilson's website, fusion is the reaction that happens when two atoms collide into one, requiring extreme heat. To accomplish those temperatures takes a lot of energy.

People have accomplished fusion before. Why is this special?

Phaneuf: Fusion reactions have been produced by different methods in laboratory experiments for many years. While he was a student at the Davidson Academy, Taylor Wilson did so on a very small scale in my lab at the University more than a decade ago. What is special about the Livermore experiment is that more energy was released from fusion reactions than was injected by the 192 laser beams that together produced them. That means that the threshold for so-called scientific breakeven in thermonuclear fusion was surpassed for the first time, a significant milestone that has been pursued worldwide for many decades by different methods.

Wilson: Really the “holy grail” of fusion research is this idea of a Q>1 or scientific “breakeven” where more energy comes out of the fusion plasma than is put in. What’s so exciting about the news from NIF is this goal of fusion ignition has been achieved for the first time. That means we are finally in these conditions where the fusion fuel is being heated in large part by the reaction itself and there is fascinating new physics to learn in this new regime.

Why has it taken so long to accomplish fusion with a net gain in energy?

Wilson: Fusion reactions themselves are easy, I did it here in the physics department when I was I was 14, and we’ve been getting better over the decades at controlling fusion plasmas, but up until now that goal of “breakeven” has been elusive. It’s hard to achieve the right conditions of this so called “triple product” of density, confinement time, and temperature. Whether it’s an electrostatic device like my early experiments, or a magnetic bottle, or the world’s largest laser like NIF, these are the extremes of temperature and pressure, and keeping everything intact at those conditions long enough to burn the plasma isn’t an easy feat!

How does this impact the field of fusion and what does this mean for the transition to clean energy?

Phaneuf: However, for net energy production by this approach called inertial-confinement fusion, the energy input to operate those 192 laser beams and other subsystems must also be taken into account. The relevant criterion is referred to as engineering breakeven, which presents a major challenge for all approaches to thermonuclear fusion to impact the transition to clean energy. That realization and practical issues of adaptability to the energy grid will require novel ideas and sustained efforts by scientists and engineers over many decades. The remaining challenges of harnessing fusion for net energy production are substantial but the potential payoff is enormous.

Wilson: Even with NIF ignition was a challenge: in timing the laser pulse, in coupling the radiation to the fuel, and trying to reduce all the pesky instabilities that crept up. But it really is a testament to all of the physicists and engineers at LLNL to see it through, work the problems, and finally achieve the goal they set out decades ago to accomplish!

To use an analogy with aviation, this is kind of like our Wright flyer moment, it demonstrates it can be done. There’s still a ways to go until we get something like a passenger aircraft, there’s a lot of engineering that will go into taking a burning plasma, whether it’s an inertial or magnetic confinement approach or some hybrid of the two, and making something that can produce useful energy, but this is kind of that all important first milestone. Fusion, which through our Sun is the primary energy source of our planet and the process that built most of the essential elements around us, represents a hopeful future for our ability to produce and utilize energy: it’s clean, it’s abundant, and immensely powerful. Only one thing we can be pretty confident of at this point: the is definitely fun new physics and engineering ahead!