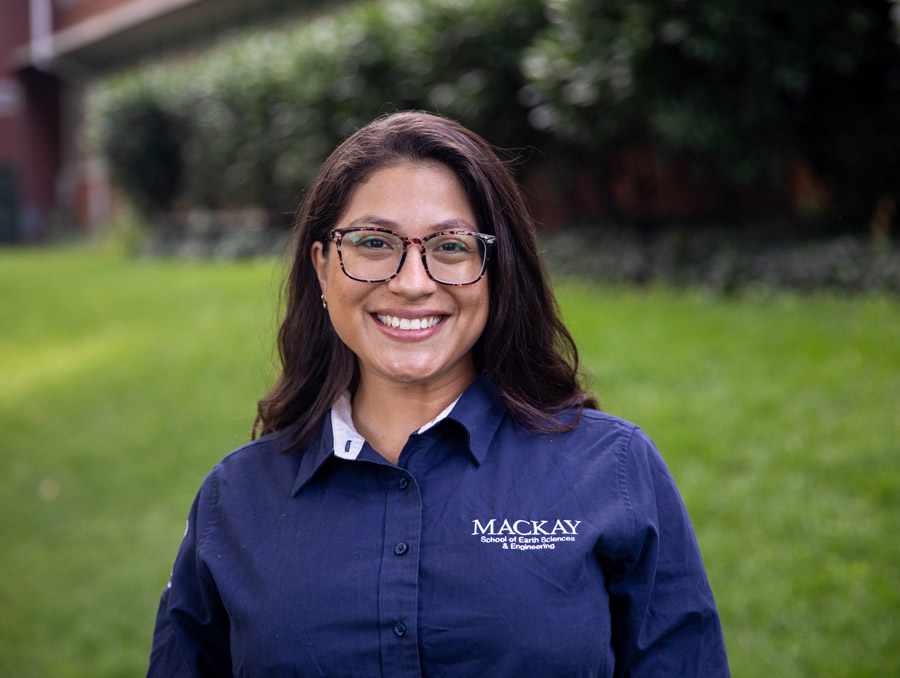 Isabel Peñaloza Araujo brought an impressive list of accomplishments with her to the University when she came to study her master’s degree in metallurgical engineering, and she’s adding a lot to that list while she’s here. Peñaloza studies the processing of critical minerals in the Department of Mining and Metallurgical Engineering in the Mackay School of Earth Sciences and Engineering and is a graduate research and teacher assistant in Pengbo Chu’s research group.

“Critical minerals are essential to the economy of the United States, especially for the climate goals of net zero by 2050, low carbon technologies and the Clean Energy Transitions,” she said. Peñaloza’s passion for mining started in her undergraduate career, and has carried her all the way to the U.S.

Growing up in Ecuador, Peñaloza was born and raised on her parents’ Fairtrade banana farm. She helped her parents and took on a management role within the business. When Peñaloza was deciding what she wanted to study in college, studying languages was her first choice. Her dad wanted her to be fluent in English, so she took private classes and practiced in school. She also learned French in school and was very good at it, but studying languages was only an option at private universities. Financially, going to a private school was not an option for Peñaloza and her family. Peñaloza went to a public engineering university instead and decided on studying mining engineering, because she heard that was a very good career. While the engineering degree was challenging as a first-generation student and because of the high demand of students, Peñaloza loved it, and she was very successful.

“In mining, I have found my passion,” she said.

Though she wasn’t able to study languages in college, Peñaloza still finds ways to practice. During her undergraduate education, she awarded a scholarship to study abroad in Brazil, where she learned Portuguese while she studied mining engineering. In Brazil, she never felt homesick because she felt like a part of the culture. In the U.S. though, it’s a different story. In December, she plans to fly home to Ecuador. She will have gone a year and a half without seeing her family.

“I started feeling homesick since my first semester. It's different right? It's a different environment. It's a different culture,” Peñaloza said. She only knows a few Ecuadorians in Reno, and none of them are in the mining industry or share common interests. “I don't really know how to define my community, but I always said I'm Latina, and I totally embrace it.” Peñaloza makes an effort to connect with other Hispanic students within mining because it’s important to Peñaloza to share experiences within her community.

“I feel proud about my culture and my heritage,” Peñaloza said. “Being a woman in STEM and a woman in mining, sharing what I do every day, sharing that it is possible to have a good job, have a good life, enjoy it and be passionate about it. I see when I started my career how difficult it was in South America to be a woman in mining. So during my time home, I made sure I built the path for the youngsters. I really wanted to see more women coming to mining, so I started joining several organizations that represent women in mining, and I am still contributing to them from here.”

Being a woman in mining wasn’t easy in Ecuador. Peñaloza said she constantly had to prove herself.

“Inclusion and diversity was not a thing in Ecuador,” Peñaloza said. She needed to adapt to get some credibility (and respect) from her classmates, professors and coworkers.

“If I weren’t so passionate and so in love with my industry, I would have left it since the very first time I got in touch with mining.” Her parents always backed her and told her, “No matter what, do what makes you happy, we will be always proud and we will support your decisions.”

But Peñaloza stuck with it and came to the United States excited for the opportunities she would have here. She was grateful to her parents who helped her finish her undergraduate degree during COVID, and even then she started working in the biggest underground gold mine, Fruta del Norte, as a junior mine engineer.

One thing that is very important to Peñaloza is being able to provide for her parents the way they have provided for her. She is still involved with her parents’ work at home. She and her mother manage the farm, and she sends her parents money whenever she can. “Thanks to them, I am the woman I am today, it wouldn’t be human to turn my back on them. I want them to live what I’m living here.”

Ensuring her own success

Peñaloza will graduate with a job already lined up for her at her dream company, Rio Tinto, where she interned over the summer in Utah.

“Bingham Canyon is one of the biggest copper mines in the world, accounting over 16% of the total U.S. copper production,” Peñaloza said. She will be working in different roles within the company, including in the mine, the concentrator, the smelter and the refinery.

Peñaloza is also very active in the mining community. She helped to reinvigorate the John Mackay Club on campus after the COVID-19 pandemic limited activities and engaged alumni and industry members on campus for students to network with. She is excited to see the club continue to grow under her peers. Many of the scholarships she received were from the Society for Mining, Metallurgy and Exploration. In addition, she will be giving a talk at the end of the week to Utah’s chapter of Women in Mining.

“I have had all the opportunities I’ve ever wanted here, and I’m so grateful for that,” Peñaloza said. She also contributes a lot of her success to Pengbo Chu, Nevada Gold Mines Professor in the mining and metallurgical engineering department. When they talked about Peñaloza coming to work in Chu’s lab, she told Chu she needed financial support so she wouldn’t have to rely on her parents and still be financially independent here in the U.S. Chu provided recommendation letters for her scholarships, and he had never seen one student get so many scholarships in such a short period.

“And he’s still motivating us to apply for more. He’s a great professor,” she added. The four graduate students working in Chu’s lab are all international students, from Iran, Cameroon, India and, of course, Ecuador.

Peñaloza knows exactly what she wants when she finishes her master’s degree. She plans to start a consulting group after some years of experience in the national and international mining industry. Peñaloza will still be paying insurance in Ecuador until she is 65, even if she retires in the U.S. at 45 like she plans to, so to supplement her insurance costs she hopes to have a strong investment portfolio and will have the option to continue to work if she wants.

“She’s very determined, and she’s very inspiring,” Chu said of his student. She’s taken advantage of the opportunities she has had at the University.

“That’s why I quit my job, my amazing job that I loved, and came here, because I knew that there were much better opportunities, because this is truly the country of the opportunities, for the people who really want to take advantage of them, and for that you need decision and commitment,” Peñaloza said.