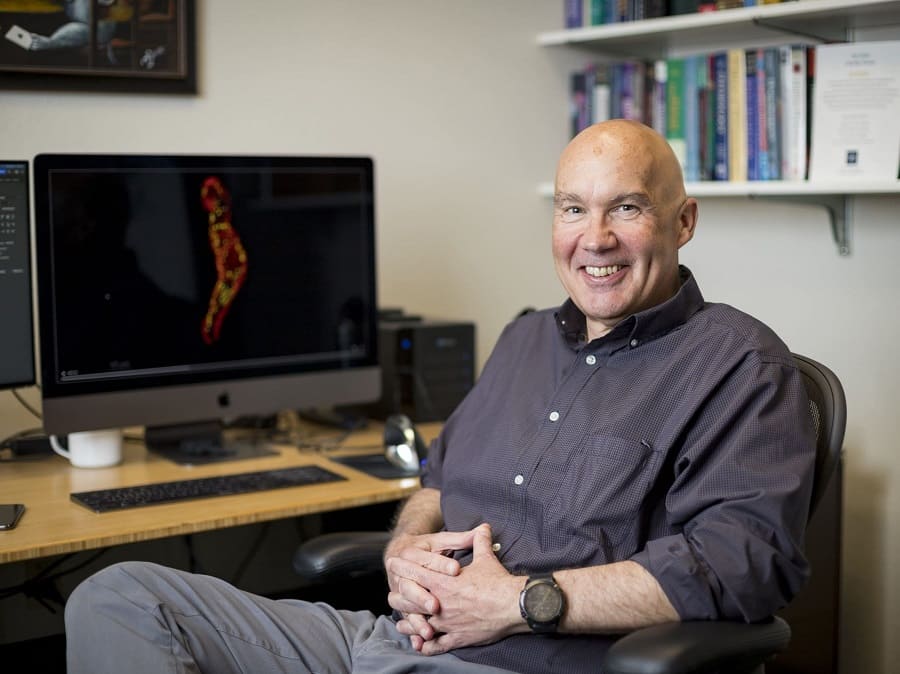 The science of cell signaling and ion channel receptors holds the key to understanding how our bodies’ systems connect and how we sense and interact with the world around us. This science is at the center of the impressive research career of the University of Nevada, Reno’s 2022 Outstanding Researcher, Scott Earley, professor of pharmacology in the University of Nevada, Reno School of Medicine.

“Early on in graduate school I realized that everything in physiology happens because ions cross cellular membranes, so I became interested in the proteins that allow ion flux. These proteins are called ion channels,” said Earley. “Ion channels dictate every aspect of our bodies’ functions.”

Since this early career inspiration, Earley has gone on to develop and lead an outstanding research program, marked by a consistent record of extramural grant support and consistent publication of findings in influential, high-impact journals. Along the way, he has played a significant role in the development of early-career faculty and research infrastructure at the University. He is recognized and respected internationally, as is made evident through the research community that repeatedly seeks out his leadership for boards, grant review panels, editorial roles, scientific meetings and invited talks.

New understanding of ion channels at the cellular level has contributed to important advancements, including the development of new and effective drugs. Earley envisions future implications for treating chronic pain and diseases such as Alzheimer’s disease.

Earley’s own research to understand how connections are made between our bodies’ systems has led to scientific advancements and drawn international recognition. Among his top cited breakthroughs, the Earley lab discovered the mechanism for a critically important function of arteries in the brain, namely the autoregulation of cerebral blood flow. This important finding has wide-ranging implications for the development of treatments to improve cerebral blood flow in conditions such as stroke, hypertension, diabetes, Alzheimer’s disease and traumatic brain injury.

To further his research, Earley received an Outstanding Investigator Award from the National Heart, Lung, and Blood Institute of the National Institutes of Health (NIH) in 2021. Known as an R35 award, its purpose is to promote scientific productivity and innovation by providing long-term support to principal investigators whose outstanding record demonstrates an ability to make significant research contributions. The R35 supports a research program – rather than a research project – for up to seven years, and provides investigators increased freedom to conduct research that breaks new ground, extend previous discoveries in new directions, and pursue research that requires a longer timeframe.

Earley’s research is also advanced by a five-year NIH grant awarded in 2019 through the Centers of Biomedical Research Excellence (COBRE) to establish an interdisciplinary center for cardiovascular disease in the University of Nevada, Reno School of Medicine. The center involves researchers in the Department of Pharmacology and Department of Physiology and Cell Biology, working to better understand the molecular and cellular signals that regulate the cardiovascular system. The center includes imaging and transgenic facilities that can be used by researchers from across the state. With top-notch talent and state-of-the-art equipment, this COBRE team pursues what Earley views as modern, comprehensive physiology research, covering a span of studies from single molecules to whole animals.

“Dr. Earley is a visionary, conducting world-class, basic-science, team research,” said Melissa Piasecki, acting dean of the UNR School of Medicine. “As he advances the science, he also advances the scientific community by supporting the success and careers of students, post docs and junior researchers. Dr. Earley is so deserving of this recognition.”

Earley’s office tells a story of someone who is passionate about science and discovery, and enjoys connecting with colleagues. Shelves are lined with books, awards and momentos gathered from scientific conferences and visiting talks from around the world. On the wall is a painting of the classic image of dogs playing poker, and the game includes the likenesses of two of his own favorite dogs.

He is known for mentoring faculty members and students, helping them develop research programs, write grants and papers. At the start of the pandemic Earley organized a get-together via Zoom with research colleagues from across the country, and that initial gathering became a monthly event that continues into 2022.

“Dr. Earley’s passion for science and discovery is inspiring, and his level of achievement is remarkable,” said Mridul Gautam, the University’s vice president for research and innovation. “He has made a singular contribution to the development of this University’s research infrastructure and to the career-development of countless scientists. His body of work is a tremendous example of the power and impact of high quality research in so many ways, and on so many levels.”

As for Earley, his enthusiasm and drive remain strong. “It’s a privilege to do this work,” he has said. “I have the best job in the world.”

Earley will be presented the 2022 Outstanding Researcher award at the University’s Honor the Best ceremony, May 10, 3 p.m. in the Joe Crowley Student Union, Milt Glick Ballroom.

Note: Josh Baker, interim chair of the Department of Pharmacology and NV INBRE director, contributed to this story.