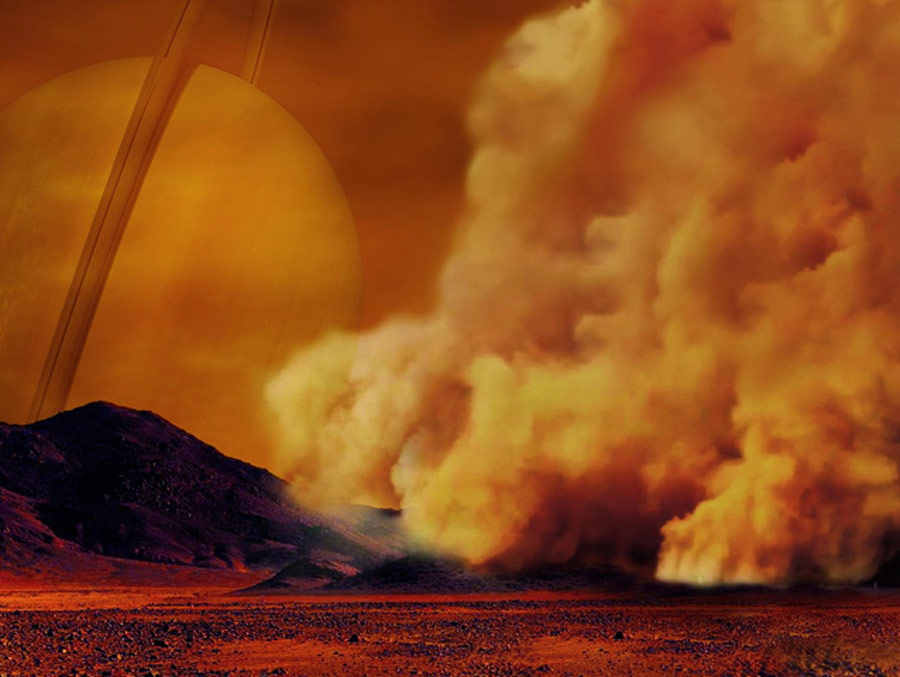 Sarah Hörst wants to find weird things on other planets and moons. Saturn’s largest moon, Titan, will be the subject of Hörst’s Discover Science lecture on December 1. Hörst will visit with students at the Davidson Academy, chat with TRiO scholars and faculty and give a talk titled “Toxic Titan” to the community. Hörst’s lecture is designated as this season’s Milt D. Glick Discover Science Lecture.

Titan has a uniquely complex atmosphere that has intrigued scientists for decades. So much so, that the European Space Agency sent the Huygens probe to its surface, teaching scientists a great deal about the curiously Earth-like moon. These scientists also believe Titan has some of the greatest potential to harbor extraterrestrial life in the solar system.

Hörst studies Titan’s atmosphere, which has a lot of interesting organic chemistry. “Organic” can mean different things depending on who you ask, but for Hörst, it means there is carbon.

“There’s a lot of it, and it has this great bonding behavior,” Hörst said. It can make long chains that are good for storing energy and encoding information, “all the things that we think life has to do. Life as we don’t know it will still probably be carbon-based.” Carbon, therefore, is usually at the core of what scientists mean when they talk about “organic” materials and atmospheres.

Hörst said it’s difficult to know what life might look like on other planets or moons, because Earth’s life is all carbon- and water-based. Hörst draws an interesting analogy: if you’re building a house in the middle of a field before an oncoming storm, and you’re surrounded by thousands of bricks and three sticks nearby, why would you try to build a house out of sticks? Life on Earth formed with what it had, which was a lot of carbon and water. Other compounds and elements are more prevalent on non-Earth bodies, so there is the possibility that life isn’t all carbon- and water-based, but until more missions produce interesting data, it’s hard to say.

Hörst wants to find things that are unexpected, given what she and other scientists know about Titan.

“I think the way that we’re going to find it is by looking chemical evidence.” When scientists find something weird they can’t explain, Hörst said that’s when the real work starts.

Hörst and her lab use a lot of data from the Cassini spacecraft, Huygens probe and Hubble telescope. She also plans to use data from JW Space Telescope, and has a lab space where she and her students do laboratory experiments and computer modeling. Hörst said a common question surrounding her work is why it matters, when there are problems here on Earth to solve.

“Going to space to try to understand other planets has really helped us understand our own planet better, and has provided us with a lot of tools that are going to be super critical going forward as we face these larger problems,” she added, referencing tools like GPS and data-serving satellites, and problems like climate change.

“History has already taught us that doing fundamental science is important,” Hörst said, like the Galileo space probe’s failed antenna deployment, which she said brought us some modern data compression technology that we use every day.

“Doing hard things is important, too,” she added. “When you’re really pushing the envelope is when big breakthroughs occur.”

Hörst hopes that her talk will encourage the audience to know that humankind can solve seemingly impossible questions. Humans went from noticing bright lights in the sky to building machines that went to those bright lights and still teach us new things about other worlds.

“I think that it shows we can work together to learn about the world around us. I think that’s one of the things that’s cool about my job,” Hörst said. “Also, planets are cool,” she added.

Sarah Hörst’s Discover Science lecture, designated as this season’s Milt D. Glick lecture, will be held on Dec. 1 at 7 p.m. in the Davidson Mathematics and Science Center. Registration through Eventbrite is now open. The remaining Discover Science lectures will take place in 2023, with Nobel laureate physicist David Wineland, whose lecture is the designated Goudsmit lecture, and children’s book author and former Smithsonian Institute Under Secretary Eva Pell.

The Discover Science Lecture Series is free and open to the public through the generous support of our donors. Past speakers in the series include astrophysicists Michio Kaku and Neil deGrasse Tyson; Robert Ballard, who discovered the wreck of the Titanic; and Bill Nye the Science Guy. More information can be found on the Discover Science website.