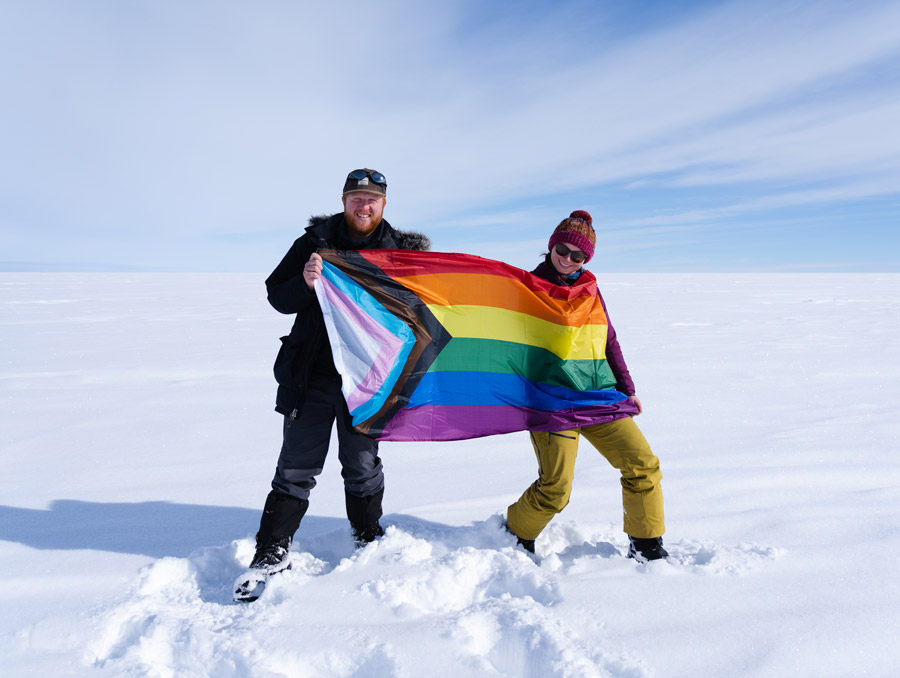 Drake McCrimmon isn’t a short guy, standing at 5 foot 10 inches tall. So it was a bit of a struggle for him comfortably fitting into the slightly-over-5-foot tents he and the rest of the crew slept in for over a month on a recent expedition to the freezing Greenland ice sheet. “When they’re your only place to hang out in the storms, it’s lots of laying on sleeping pads.”

Fortunately, the passion McCrimmon has for ice and his strong distaste for hot weather (“Summer is literally the worst thing in the entire world.”) made it all worth it. McCrimmon, a doctoral student in the Graduate Program of Hydrologic Sciences, an interdisciplinary, collaborative program between the University of Nevada, Reno and the Desert Research Institute, bringing the two institutions' expertise together in one program. McCrimmon recently returned from the ice sheet as part of a research expedition to extract thousands of years’ worth of ice cores. “I’m very excited about polar research, and I’ve always been fascinated about ice core chemistry. It was super, super cool to go to Greenland and have that experience.” It wasn’t McCrimmon’s first ice expedition either. While pursuing his master's degree, McCrimmon studied two glaciers in Alaska and was part of a team that collected several permafrost cores in the Arctic.

But the opportunity to participate in this expedition was a bit of a surprise. “I officially joined this lab at the beginning of May. I got an email from Nathan a couple of weeks before that.” Nathan Chellman, an assistant research professor at the Desert Research Institute (DRI) and McCrimmon’s advisor, told McCrimmon that one of the team members might not be able to go, and asked McCrimmon to go through the medical testing process to be cleared to go. McCrimmon got his medical clearance a week before leaving and joined the team on their expedition. “It was scrambling at the end for sure. This is a project that they have been planning for three years. The expedition was set to happen in 2020, but due to COVID and logistical issues, kept getting cancelled until 2022, McCrimmon said. “It finally happened in 2022. It’s funny that they’ve been planning all this for so long and it still all comes down to the very last minute.” McCrimmon added that DRI’s ice core lab did a lot of work to plan the project, between buying food, obtaining permits, coordinating between agencies, and more.

The expedition involved a lot of logistics. The research team flew from Reno to Albany, New York. They flew within sight of the fires ravaging Santa Fe, New Mexico at the time. After a weeklong quarantine in Albany, the team traveled to Kangerlussuaq, Greenland on a military plane. They packed their gear, including tents, drilling equipment and food, then traveled to the East Greenland Ice Core Project (EGRIP) site. They then traveled over the Tunu ice sheet to their drilling site, a remote location where they would have very limited contact with the outside world for five weeks. It took four plane shuttles to get all the gear to the site where part of the team would set up the camp. The other part of the team drove two Arctic trucks for 15 hours.

One might expect that doing intense physical labor, like moving equipment and digging trenches, in typically below-freezing temperatures might have been the biggest challenge, but for McCrimmon, that was all in a day’s work.

“The isolation was the hardest part of the expedition,” McCrimmon said. However, as he was a new member of the lab, 34 days with eight people in the middle of the ice sheet helped him “break the ice” with his new coworkers. For McCrimmon, the isolation felt reminiscent of the beginning of the pandemic. Without many activities beyond the boundaries of the camp, McCrimmon found bonding with his teammates to be even more important.

“I’ve done extensive camping trips and things like that before, where I’ve been gone for months at a time. This is definitely the most isolated I’ve been from the rest of the world, friends, you know, your support system from home.” The team had a couple of opportunities to make satellite phone calls, but the calls were expensive and thus infrequent. “I think we ended up having a pretty solid crew. We got to know each other a lot more, we started playing games and hanging out.”

Bringing a piece of Greenland to Reno

After weeks spent collecting the ice came the matter of getting the ice to the specialized facilities. A plane, shuttling back and forth between the drilling site and the EGRIP site, had two planeloads of ice packed carefully in boxes. Two more trips brought out the camp equipment and the drill. The team that flew on the plane and the ice then moved on to Kangerlussuaq. Five team members drove from the drilling site to EGRIP. The drive took 18 hours on the way back, and the team then flew to Kangerlussuaq. From there, team members started to go their separate ways, and the ice made its way from Greenland to the U.S. this week.

In late July, several researchers will travel to Colorado’s National Science Foundation Ice Core Facility. There, samples will be prepared and driven to Reno where they will be analyzed in DRI’s unique ice core lab. McCrimmon is feeling slightly nervous about that whole process.

“You spend a lot of logistics money, and a lot of time, and a lot of effort to get to this crazy isolated location and get all this ice, and then what happens if it all melts?” McCrimmon joked, laughing nervously. “But it should be fine, I know that this is what they do. But I am a little nervous.”

Over the course of five weeks on the ice, the team collected over 400 meters of ice core, equating to about 9000 pounds. The main goal of the project is to look at the relationship between human activity and climate. The team was planning to get data from as far back as 2000 BCE, but the ice became too brittle near 220 BCE, so the team started a new ice core instead to provide a comparative sample. The ice collects chemistry from fire and weather events, like volcanic eruptions, and from pollution.

At the ice core lab, the ice will be melted, and the water pumped into a variety of instruments that measure different elements. For his dissertation work, McCrimmon is excited to see signals of wildfires burning across the Northern hemisphere within the ice.

The research team documented the expedition with a story map called “The Return to Tunu.” The story map introduces all the team members, but the month the team spent on the ice held special meaning to a couple of the team members. June is LGBTQIA2S+ Pride Month, and McCrimmon packed something others might not think to.

“There are probably only a few queer people in the ice core world,” he said. He had recently become friends with one of them, who had done fieldwork in Antarctica. “He said that he didn’t bring a Pride flag, but he wished he had, and that made me bring one.” When McCrimmon, who identifies as gay, brought out the flag, Sophia Wensman, a National Science Foundation Postdoctoral Research Fellow at DRI, was thrilled. “Her face just lit up” when McCrimmon and she posed with the flag on the ice. “Historically a lot of environments with big field expeditions are relegated to a certain subset of people. It’s nice to show that people of all walks of life are welcome in these types of experiences. You can be queer and come to the ice sheet and do cool science.”

McCrimmon points out that visibility of queer people in polar sciences has improved with groups like Pride in Polar Research, an organization that connects and supports queer communities in polar research. “Pride is fun because you’re seeing the community that exists around you. Sometimes you forget that it’s there. It’s a nice way to celebrate camaraderie.”

McCrimmon said the path to studying ice cores wasn’t very clear. When he graduated from his master’s program, he took time off (“Because I didn’t know what I wanted to do with my life,” he said), traveled, and worked in industry. He returned to get his PhD with the goal of getting into the ice core field, where he could combine his interests in water and climate studies.

“It’s mostly been a hustle to make it happen,” McCrimmon said. He wants to encourage others to seek out opportunities like his, even if the path isn’t obvious. “It’s okay to follow weird paths in your life, and it’s okay to take time off, and it’s okay to seek out things that you’re passionate about. There are crazy experiences like these that you can have if you want to, no matter what your background is.”

Making their MARC: the MARC program recruits its first cohort of students