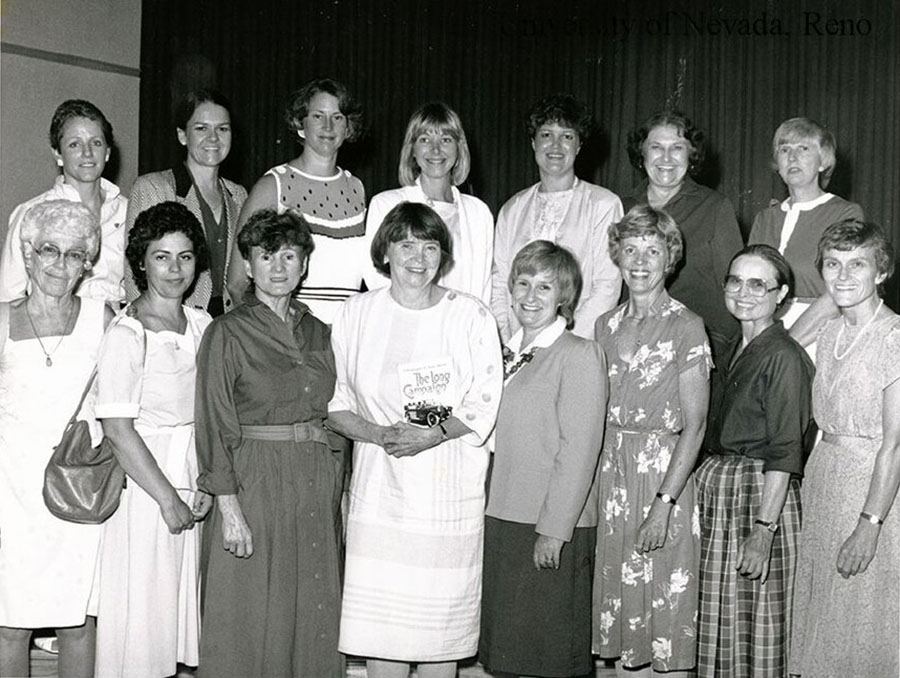 Anne Howard, an English professor at the University for 37 years and a groundbreaking campus figure who helped form the Women’s Studies Program, passed away in May. She was 94.

Howard, who retired from the University in 2000, had relocated from Reno and had been living in Redding, Connecticut during the pandemic with her son Jason and his family.

Anne Bail Howard taught and directed the remedial English program at the University of New Mexico before both she and her husband, Bill, an art professor, joined the University faculty in 1963.

Jason Howard noted that the Howard family arrived in Reno after Bill had “unexpectedly lost his teaching job” at New Mexico. “After a road trip job search, he returned with an offer to teach painting at the University of Nevada, Reno,” he said. “The bonus for Anne (who was in the process of finishing her dissertation in English) was her position in the English Department. For several years, she was the only female professor in the department.”

Howard quickly made an impact. Jason Howard added: “The new job was a giant leap that she took very seriously. Some male colleagues were unsure about a woman in the department, but several enlightened men helped push barriers out of the way. While teaching full time, usually English Composition, to often reluctant undergrads, she used summers to finish her dissertation on Nathaniel Hawthorne. Finally, with a doctorate, she was permitted to teach courses reflecting her passion for 19th Century American Literature.

“When she learned that her salary was substantially lower than those of her male colleagues, she formulated a plan. First, she ran for Faculty Senate. Once an established senator, she began an ultimately successful 11-year campaign to force a faculty salary study, an effort that resulted in salary adjustments for women across the University.”

A founder of Women's Studies

By 1973 Howard was serving as chair of the President’s Ad Hoc Committee on Women’s Studies. That year Howard she sent a letter to University President N. Edd Miller, asking for funding to start a Women’s Studies Program by 1974.

“We present the documents for your consideration in the hope that this report may be the first step in the realization of a Women’s Studies Program at UNR,” Howard wrote. In the 1994 paper, “Defining Moments in Women’s Studies at the University of Nevada, Reno,” by Sheryl Kleinendorst and Jean Ford, the authors noted that Howard’s letter wasn’t merely a request. It included survey results focused on possible courses, student preferences for courses, and a survey detailing universities of similar sizes and scope where Women’s Studies programs were already in place.

Howard’s letter included the news that several departments – Political Science, English, Sociology, Social Services and Corrections, Anthropology and Art – were already offering courses in the subject matter or were planning on adding courses soon. The near-term goal was to offer a foundational course, Women’s Studies 101, and within three years offer Women’s Studies as a minor.

Howard added in her letter that, “We have tried to be realistic in our requests, taking into account the University’s eternal shortage of money for new programs, but recognizing the real need for developing women’s programs.” Although it took some time, Women’s Studies 101 was offered by the University in fall 1979.

In a 1979 interview, Howard, who taught the language portion of the course, said, “In a way, it’s an effort to remedy the omissions of the past. … I think women need to be informed about their own past and their own characters.”

Howard worked tirelessly behind the scenes throughout her career at the University to ensure that Women’s Studies gained a foothold. A director for the program, Elaine Enarson, was named for the 1985-86 academic year. A Women’s Center was founded during that time, eventually finding a home in one of the Victorians on Center Street. A new Women’s Studies major came on board during the late 1990s. Women’s Studies Director Jennifer Ring noted in a 1997 interview that of the program’s growth that, “English Professor Anne Howard got it started, and Ann Ronald, former dean of Arts and Sciences, made it a priority.”

'The Long Campaign' and equal rights

In addition to the work Howard did on numerous campus committees, Howard was an award-winning instructor and writer.

“She loved teaching teachers so much that she spent many years with the Nevada Writing Project,  helping high school teachers across Nevada,” Jason Howard said. “Her colleagues, familiar with her speaking skills in the Faculty Senate crusades for pay equity with men, called on her performance skills on many occasions.”

Howard’s 1985 biography of Anne Martin, “The Long Campaign: A Biography of Anne Martin,” brought to life a story that was an important one in Nevada’s history. Martin, an 1894 graduate of the University, was a founder of the University’s Department of History. She traveled the state from end to end in an ultimately successful campaign that led to the passage of women’s suffrage in Nevada in 1914. Martin later ran for the U.S. Senate.

Martin, Howard wrote in her book, was “the classic New Woman … educated, independent, traveled, ambitious.” Martin made it her life’s calling to not back down and to find ways to empower other women. She desired, Howard wrote, to be “a model for women to emulate – a woman acting for her cause with all of her abilities.”

A life of teaching, community involvement

Howard herself had grown up around reading and education. Her mother, Effie, was a grade school teacher. Her father, Ernest Bail, was a lead highway engineer. In high school, she’d worked as a proofreader at the newspaper in Albuquerque, New Mexico, making 85 cents per hour. After she graduated from the University of New Mexico in 1949, she was society editor at the Albuquerque newspaper, then moved with husband Bill, who was an artist, to Mexico City where she worked on the staff of an English-language newspaper.

When she and Bill returned to New Mexico, she taught high school English and liked it.

“So I went back to school to get my doctorate,” she said. She and Bill also had a family – son Jason and daughter Emily. Their household was predicated on the arts, on learning, respecting others and standing up against discriminatory behavior. It was only natural, she said in her 1999 Oral History, that when there were opportunities to change the status quo for the better at the University, she felt it was her duty to do something.

“When I have causes I’ve tried to behave myself very well, earn A’s,” she said in a 1999 University Oral History. “I had two things I wanted to take care of: the Women’s Studies Program and the Women’s Center, and it makes you a public, polite person – to a point.”

It was during the 1980s that Howard became an even more visible and notable presence in the community. She lobbied for the Equal Rights Amendment in the Nevada State Legislature and supported and was a confidante of many of the most prominent and pioneering northern Nevada female political figures of the time – State Assemblywoman and State Senator Mary Gojack, Secretary of State and Attorney General Frankie Sue Del Papa and Lieutenant Governor Sue Wagner. When Bill Howard died from cancer in 1986, Howard continued to give back to the community. She was an on-air spokesperson for public radio station KUNR and public television station KNPB, and became actively involved in Chautauqua, performing as notable female figures from American history.

In 2019 Howard sold her home in Reno and moved to an assisted living center in Ridgefield, Connecticut. She moved in with Jason and wife Gail during the pandemic.

Howard is survived by her daughter Emily Howard and her wife Jennifer Strauss and their children, Emmett and Marina Blu Howard of Berkeley, California; son Jason Howard and his wife Gail Hall Howard of Redding, Connecticut; Anne’s granddaughter Emily Hall, and great-granddaughter Rosie Hall of Redding, California; and a cousin, Carolyn Bail Isbell of Montrose, Colorado.

A celebration of life for Anne Howard is planned for late August in Reno. When finalized, Jason Howard will share details of the gathering on his Facebook page.

President Brian Sandoval talks with the ASUN president and vice president about why they chose to study at the University, what goals they plan to accomplish this year and more.