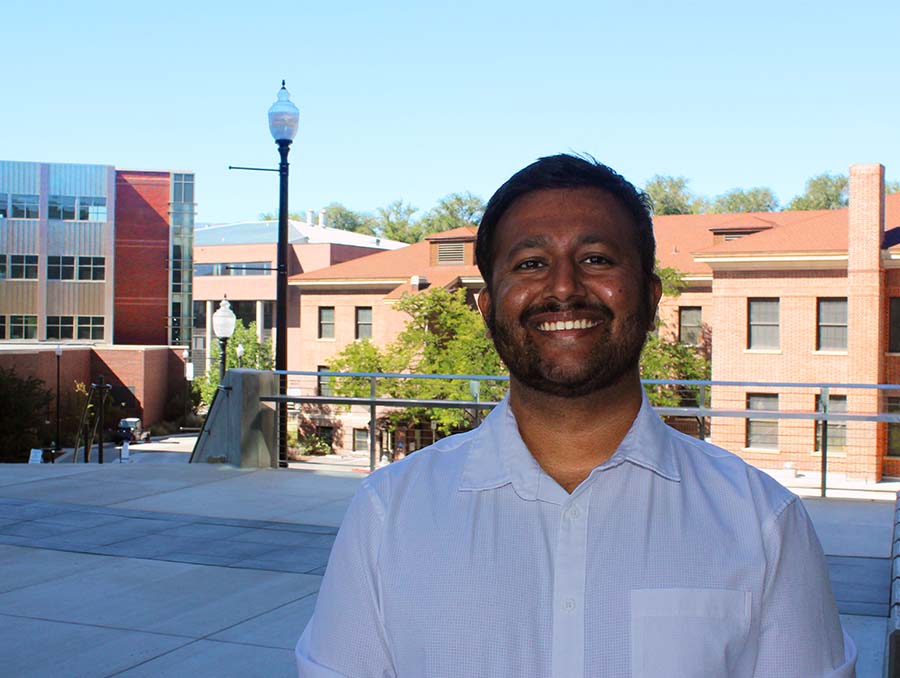 Understanding how physical systems interact — for example, how a wind turbine interacts with wind and temperature fluctuations— is key to understanding and building better systems. That's the premise behind a five-year research project begun this summer by Mechanical Engineering Assistant Professor Aditya Nair. The project, funded with a $749,034 Early Career Research Program grant from the U.S. Department of Energy, ultimately could help engineers harness maximum performance through intelligent design.

The DOE Early Career Research program, now in its thirteenth year, is designed to bolster the nation’s scientific workforce by providing support to exceptional researchers during crucial early career years when many scientists do their most formative work. Awardees were selected from a large pool of university- and national laboratory-based applicants.

“Physical system A, physical system B, both of those systems behave in different ways — how are they actually going to talk to each other?” Nair said.

His research project, “Network-based simulations of coupled multi-physics systems,” seeks to establish a computational framework that models how physical systems “talk” to each other on a graph dynamical system. The graph dynamical system considers nodes, or basic units of data structure, and how they are connected to each other by weighted graphs (graphs in which each edge has an associated value). The research insights, Nair wrote in the project abstract, “will facilitate an accurate characterization of cross-physics sensitivities, automate the algorithmic selection process for high-performance computing, and enable energy-efficient functioning of multi-physics systems.”

The concepts to get there can seem abstract, but Nair’s excitement for this project is tangible.

“I want to emphasize that really understanding fundamental interactions between physical systems and taking advantage of them to build better technology is the key to scientific progress,” Nair said.

Help along the academic journey

Getting a DOE grant is never easy, but Nair had additional stressors. When he was applying to the program back in January, his newborn daughter was in the hospital.

“It was a stressful time,” Nair said. “The DOE was encouraging and accommodating, they understood where I was coming from.”

Today, his little girl is well — “she’s awesome,” Nair said — and he credits her and his family with his good fortune. He was one of only 83 scientists across the nation awarded grants this year through the DOE Early Career Research Program.

“My daughter has brought me all the luck I need,” he said.

If Nair feels lucky, he’s also extremely qualified for the award. With a Ph.D. in mechanical engineering from Florida State University, his primary research interests are at the intersection of fluid mechanics, data science, and graph theory. He has published multiple papers on modeling and controlling fluid flow behavior and other topics in such publications as Progress in Aerospace Sciences and Journal of Fluid Mechanics.

He credits his teachers for his strong academic foundation.

“In Hindu culture, gurus (teachers) are very important,” he said. “For me — my teachers, my Ph.D. advisor and post-doc advisors, their training is what helped me get this award. Hopefully, I can become a guru like that for future generations.”

Receiving the grant, Nair, said, has validated his academic ideas.

“For me, especially as a starting faculty member, it is very encouraging to know that I can actually work on what I’m thinking about,” he said.

Nair is a founding member of the AI Institute for Dynamic Systems and has assisted in developing the predictive capabilities of the Truckee Meadows COVID-19 Risk Meter.