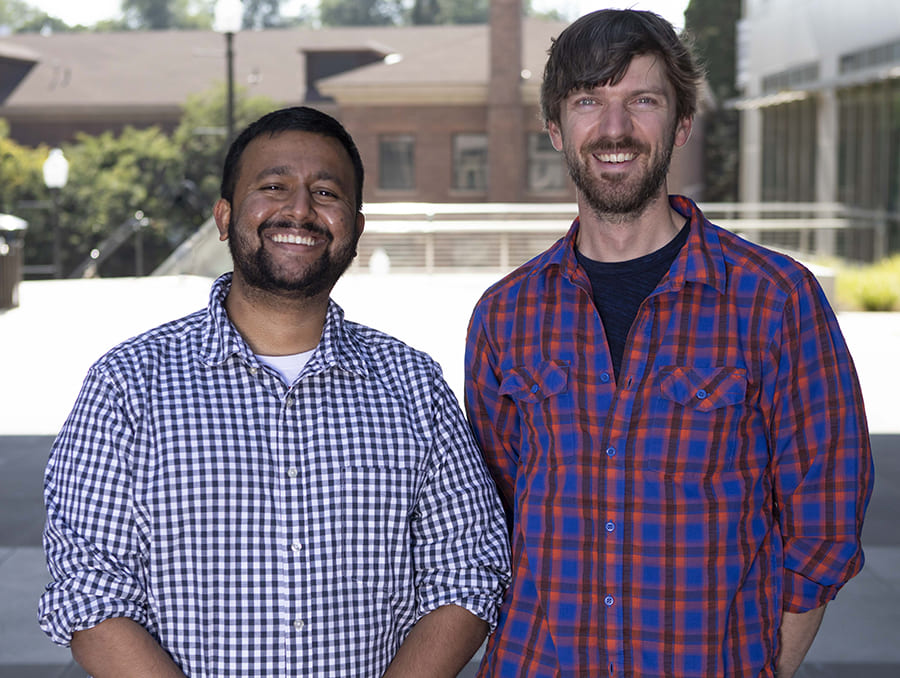 The National Science Foundation recently announced the funding of 11 centers for research on artificial intelligence (AI). Among these, the AI for Dynamic Systems institute will include contributions from University of Nevada, Reno Department of Mechanical Engineering Assistant Professors Aditya Nair and Floris van Breugel. They will bring to bear their expertise in dynamic systems and fluid dynamics to enhance machine learning.

“The institute’s goal is to make machine learning solutions more robust by integrating knowledge we already have of the world,” van Breugel said. “We are hoping to create physics-informed AI.”

To illustrate the way that the new institute will advance research goals, van Breugel described one of his current projects. His research team has placed on skis special devices that are designed to determine the characteristics of the snow beneath the rider as he or she careens down the mountain. The information gathered will be used to build models of the snow, which in theory could inform not only the Saturday skier and budding Olympian alike but also environmental managers. Machine learning will help van Breugel’s team compute large amounts of data, but the critical difference between van Breugel’s approach and more traditional ML systems is the integration of known information about physics.

“We know a lot that AI doesn’t necessarily know,” van Breugel said. “For instance, we know that energy in the system is not going to increase, and we know that acceleration and velocity are related.”

The idea, then, is that if this kind of information is fed into AI, it will know not to model versions of the world where, for instance, snow falls up because such a model would never match reality. While that may be a given for a human, a traditional ML system may expend vast amounts of computational power and time developing models where snow falls up. By introducing the constraints that we know from the real world, that time and power will be saved and will help the ML system more quickly and accurately model the actual conditions experienced by skiers.

“AI is going to be a unifying goal in many fields of research,” Nair, whose work is in aerospace engineering, added. “In my case, I am most interested in turbulence control. I also study systems with multi-scale behavior. All these systems obey certain physical laws. Why not bake those laws into the AI technologies and make sure the AI obeys those constraints?”

And there promises to be a great quantity of research from the wide-ranging group of experts. Including Director J. Nathan Kutz and Associate Director Steven L. Brunton, the institute brings together 31 researchers from universities as far west as the University of Hawaii and as far east as Harvard and Columbia.

“The beauty of the team is that we all come from different fields, but our core tenets are the same,” Nair said. “Whether we are working on modeling, control, or optimizing systems, we all fit in. None of us want AI to be the black box it is now, and we all strive toward models that are sparse and robust.”

“Being included in the institute provides us with a tremendous platform to build our research portfolios. The institute gives us an opportunity to collaborate and build an infrastructure for future research, and instead of only solving small canonical problems, we can push the limits towards overcoming computationally intensive big data challenges.”

For both van Breugel and Nair, inclusion in the institute will allow them to continue to develop their already thriving labs. In the past year, van Breugel was named a Sloan Fellow and awarded the prestigious Air Force Research Laboratory grant, and within months of arriving on campus last fall, Nair provided local authorities with the tools necessary to predict future COVID infections. The NSF funding for the institute will support students and post-docs in their research teams for five years.

“Being included in the institute provides us with a tremendous platform to build our research portfolios,” Nair said. “The institute gives us an opportunity to collaborate and build an infrastructure for future research, and instead of only solving small canonical problems, we can push the limits towards overcoming computationally intensive big data challenges.”