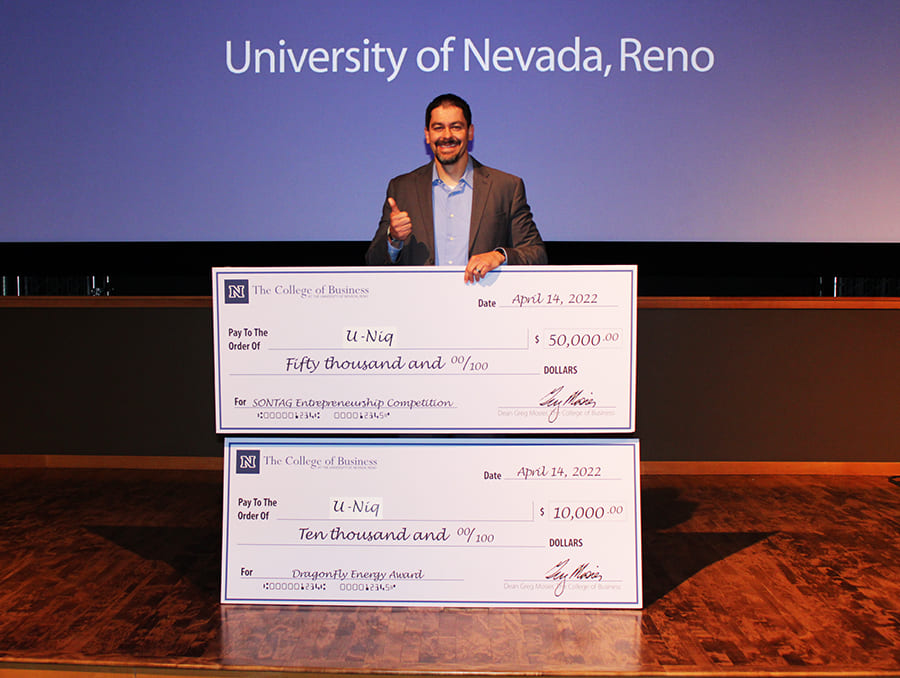 Perm Singh, an MBA student in the College of Business at the University of Nevada, Reno, took home this year’s $50,000 grand prize at the 11th annual Sontag Entrepreneurship Competition for his company, U-Niq.

Along with the Sontag Award, U-Niq also won the Dragonfly Energy Innovation Award, a $10,000 prize funded by Sean Nichols and Denis Phares, co-owners of Dragonfly Energy and finalists of the 2014 Sontag Entrepreneurship Competition.

“I am blown away that I was able to convert the ideas I had in my head into a business with tremendous potential,” Singh said. “I kept feeling that this business was something I should pursue and winning both the 2022 Sontag Award and Dragonfly Energy Innovation Award provided further validation that I am on right path.”

When asked what the Sontag competition has meant to him, Singh said, “This experience was incredibly valuable to help me refine my business and the way to convey it to others. I told myself going into the competition that, win or lose, it would force me to act on developing my business further. The competition pushed me out of my comfort zone, and I am very grateful for the support of the advisors who guided me and the feedback from the judges.”

The Sontag Finals took place Thursday, April 14, and featured five student-led teams all aiming to turn their business dreams into a reality.

Alongside U-Niq, four other teams presented their ideas to the judges. The finalists included:

The Sontag Entrepreneurship Award is made possible by a major gift from University alumnus Rick Sontag. The $50,000 award is presented each spring semester to the winning team to help fund the expansion of their business.