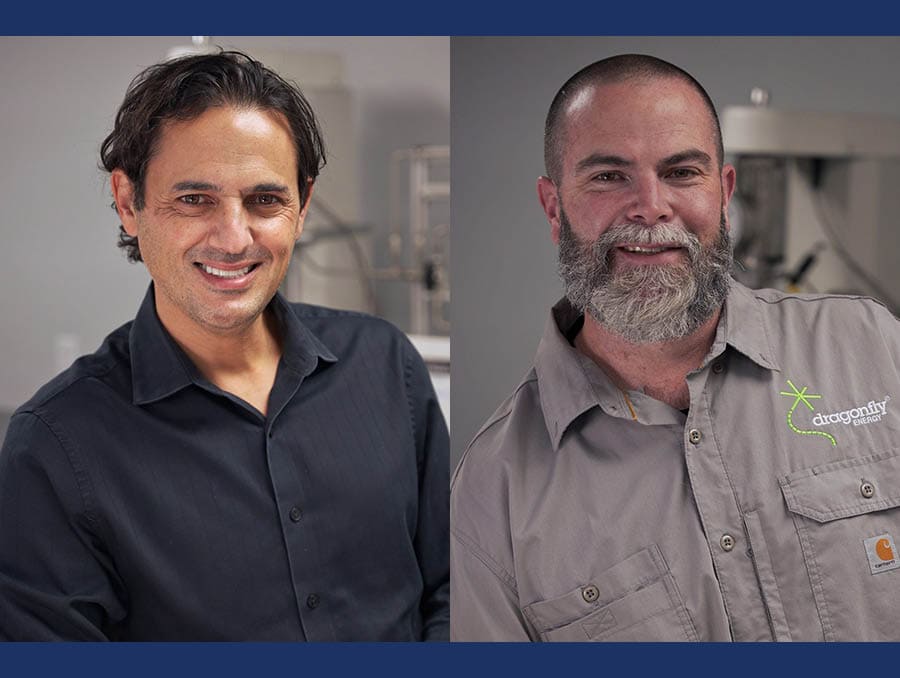 Sean Nichols and Denis Phares, co-founders of Dragonfly Energy, a leading developer and researcher of lithium-ion battery technology, have funded a new $10,000 award for the College of Business at the University of Nevada, Reno Sontag Entrepreneurship Competition.

Nichols and Phares first met in the College’s Executive Online MBA program in 2012. Each with extensive backgrounds in energy storage, the pair teamed up and identified an unfilled gap in the industry. Together they began researching greener and more reliable battery technology, building the first batteries out of Phares’ garage. There, Dragonfly Energy was born.

In 2014, Nichols and Phares competed in the Sontag Entrepreneurship Competition and won the Donald W. Reynolds Tri-State Governor’s Cup. The College’s Sontag competition was a huge opportunity and stepping point to make the duo’s vision for Dragonfly Energy become a reality.

“Being in a competition that brought local and national exposure to our company early on was an invaluable experience,” Phares said. “It’s impossible to say what the future of Dragonfly Energy would’ve looked like without our involvement in the program. Sontag required us to develop a business plan that served as a template for the company moving forward.”

Nichols and Phares, who pride Dragonfly Energy on being innovative, were thrilled and impressed by the level of business MyKar has achieved thus far.

“I think the new Dragonfly Energy Innovation Award is just absolutely incredible,” Lamb said. “The fact that a former Sontag finalist is willing to help other startups succeed, dedicated to giving back and able to provide an extra opportunity for entrepreneurs is just really inspirational. I can't thank those guys enough.”

After gaining valuable customer-facing experience working in the mobile phone industry, Nichols worked extensively with off-grid power systems as the vice president of sales & operations at a major power inverter company. As Nichols worked to position that company as a world leader in inverter technologies, he simultaneously began pursuing his Executive MBA at the University.

When asked what advice he would give to future Sontag competitors, Nichols said, “If you want to roll out a real business, you can. Sontag is the perfect place to test the waters and develop a real, viable business plan, preparing you to take your idea and turn it into a reality.”

Phares first earned a bachelor of science degree in physics from Villanova University and then obtained his PhD in engineering from Caltech before settling into academia. As a tenured faculty member of the Aerospace & Mechanical Engineering Department at the University of Southern California, Phares began working extensively on renewable energy technologies. He eventually left academia to follow his dream of making an innovative impact in energy storage. He began working on his Executive MBA from the University, with the end goal of starting a business developing battery technology.

Phares’ advice to future Sontag competitors is, “It is important to be adaptable, especially early on in developing a business. You get feedback on your idea that provides you the opportunity to expand your vision. Sontag helped create a path to launching our business.”

To learn more about Nichols and Phares’ journey from Executive Online MBA students to founders of Dragonfly Energy, listen to Episode 16 of “The Jim & Jeremy Show,” a podcast highlighting the resources, challenges and opportunities for students of the College of Business.

" With COVID-19 and supply chain issues still causing problems throughout the economy, it’s a good time for small business owners to turn toward their local and national resource networks.