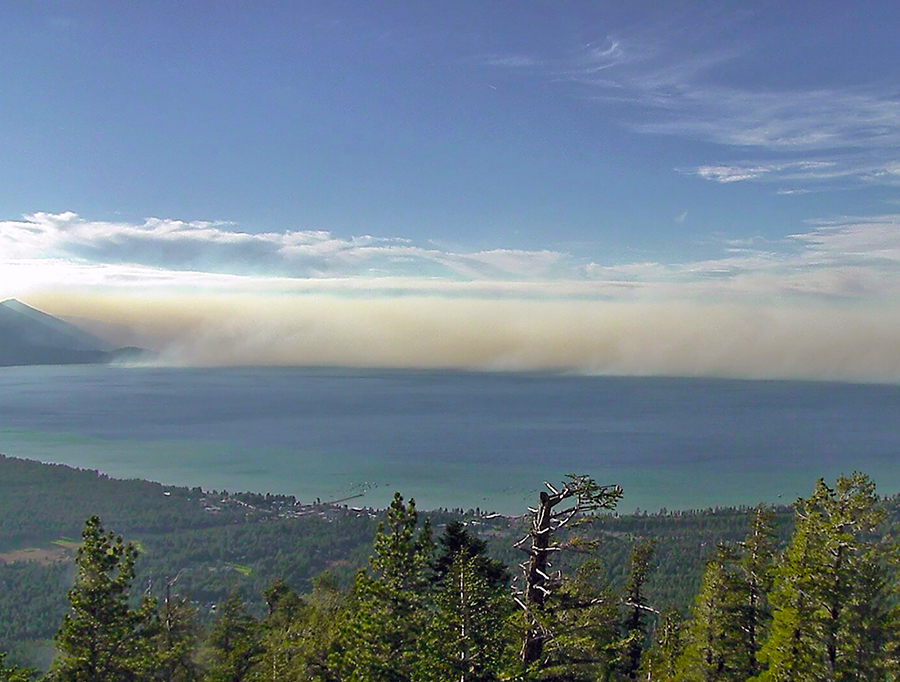 The wildfire season has arrived in North America, and recent research highlights that the impacts of wildfire smoke emissions can alter aquatic ecosystems far away from the sources of the fire.

In the summer of 2018, intense smoke from six major wildfires covered Castle Lake, west of Mt. Shasta California, for 55 days. Researchers from the University of Nevada, Reno, which co-facilitates research operations at the 50-acre lake, showed a significant change to the biology, chemistry and physical dynamics in the lake.

"The most significant aspect of this study is that wildfire can modify ecosystems hundreds of miles away from locations that are burning, and the impacts from smoke remain well after the smoke disappears" Facundo Scordo, a researcher with the University's Global Water Center and Department of Biology and lead author of the study, said. "Trout also disappeared from the nearshore edge of the lake, presumably moving to the open water habitat where there are smaller food particles called zooplankton for them to eat.”

Other studies have similarly shown that smoke plumes have the potential to cool the surface of the earth by reducing the amount of incoming solar radiation that reaches the ground. Similarly, wildfire smoke from previous fires decreased water temperatures of 12 rivers and streams located in the lower Klamath River Basin in northern California.

"Mountain lakes and rivers, while they may seem pristine, are generally clear and sensitive to changes in ultra violet and visible light and changes in water temperature.” Scordo said. "The reduced light and cooling water temperatures change the food supply to trout. For example, the smoke influenced the lakes deep water algal production, causing it to disappear. However, in the lake's shallow water the algae production increased by 109% due to reduction of ultraviolet light and potential fertilization of nutrients by the smoke. It left me wondering if harmful algal blooms could develop as a result of wildfire smoke.”

The observations were made during the summer growing season while six major fires burned in Northern California. Castle Lake is emblematic of other glacial, mountain lakes and it is located in the Upper Sacramento River watershed which is a major water supply for the State of California.

The research program at Castle Lake was initiated in 1959. The resulting long-term ecological research study with 64 years of data collection demonstrate how mountain lakes are sensitive to changes in climate, snowpack, and nutrient supply from the watershed. The lake is an important recreational spot in Northern California.

“The 2020 fire season was another devastating year of wildfires and smoke generation in the United States, with over 10.1 million acres burned and 2.5 times the acreage burned in California when compared to 2018,” Steve Sadro, a University of California, Davis researcher and a co-author of the study, said. "Connecting wildfire smoke impacts to the water quality in aquatic ecosystems is of urgent relevance as the frequency and severity of fires increase in California. U.C. Davis and the University of Nevada, Reno have been funded by the National Science Foundation to expand from this work and explore the impacts of smoke from the 2020 fire season across a range of aquatic ecosystems," he said.

While this study investigates the response of a single lake ecosystem to regional wildfire smoke, the fact that smoke can impact the air at the continental level as evidenced by the 2020 wildfire season suggests that fires may influence lakes and rivers across the United States. Understanding these impacts to society and our natural resources will require planning and a multistakeholder effort.

"Life is already complex and can you imagine living in a world with increased wildfire risk and its smoke emissions?” Sudeep Chandra, director of the Global Water Center and professor in the Department of Biology, said. “Just as tiny particle from smoke and air pollution affects a human’s ability to breath, we demonstrated that wildfire smoke affects how lake’s breath, the production of plants at the base of the food web, and the behavior of animals. To understand how we might live with wildfire smoke, agencies need to break down institutional barriers and support cross disciplinary science endeavors that quantify changes to ecosystems.”

The team of researchers is already investigating several questions that arose from the initial work:

Researchers at the University of Nevada, Reno's Global Water Center and the biology department led this study with engagement by researchers from the Miami University in Ohio, University of California at Davis and Rensselaer Polytechnic Institute.