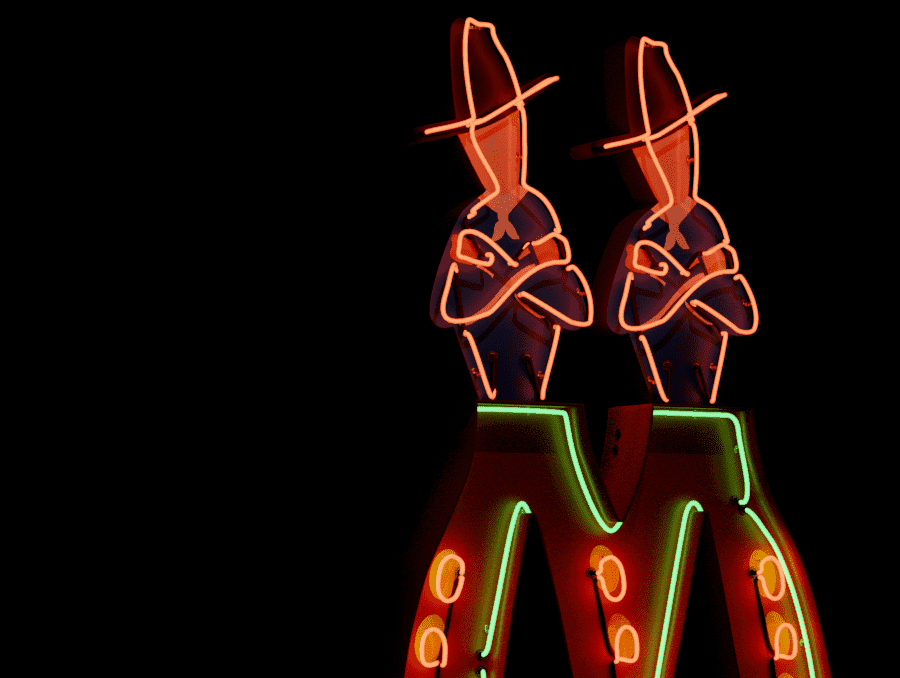 When you think of the biggest little city in the world, you might find yourself imagining the iconic Reno arch - a dazzling, fluorescent sign that lights up the city’s night sky. This neon sign is a long-time landmark of Nevada, inviting both locals and visitors from all over the world to explore the city that it frames.

Neon light itself holds a significant part of Nevada’s history, even becoming the official state element in 2019. Yet, many of these classic signs have become worn with time or even forgotten and tossed in the junkyard.

As a graduate student at the University of Nevada, Reno, Janice Baker was passionate about Nevada’s iconic neon and interested in doing something to both showcase its history and help preserve it.

“I love and appreciate the creativity and artistry that goes into creating a neon sign,” Baker said. “From the neon colors and typography to the animation, we just don't see signs like this anymore.”

Baker decided that her final graduate project for her master’s degree in media innovation would highlight and conserve Nevada’s neon.

“I received a University newsletter that featured Dr. Hepworth’s research on the digital archive for our state’s neon,” Baker said. “It immediately clicked with me, and shortly after reading the article, I proposed my idea to recreate the signs in 3D and launch them in augmented reality (AR).”

Baker had earned her Bachelor of Fine Arts in design and visual communication from Weber State University and, at the time, was working on a master’s degree in the Reynolds School of Journalism. Her educational background created a solid foundation to start her project in July of 2020. However, recreating classic neon signs in a virtual medium was a new undertaking.

“Before I started building my first neon sign, I had quite the learning curve ahead of me,” Baker said. “Not only did I need to learn how to create 3D models, [but I also] had to first learn how neon was made.”

Will Durham, the executive director of the Nevada Neon Project, supported Baker in her project by helping her to further understand neon and how to rework it, as well as providing her with signs to virtually refurbish from his own collection.

She spent half of the summer of 2020 diving into the 3D software that she would use to bring this project to life. Next, Baker decided on the first sign that she would tackle: the Mapes Cowboys – a towering two-cowboy sign that was previously used to form the "M" of the Mapes Hotel.

“This first sign took me over 60 hours to build,” Baker said. “It wasn’t until I started working on the other signs where I realized that the Mapes Cowboys was one of the most intricate and complex signs of them all.”

Another memorable sign for Baker was The Silver Spur. The glow of this sign previously signaled the no-longer-existing Silver Spur Motel. She spent hours hand-painting every brushstroke of the spur, only to find an easier way to recreate that portion of the sign in the software program.

“I could have saved myself about 14 hours, but I really enjoyed learning how to paint in the 3D program,” Baker said. “This is one of the sign’s most unique features, and I knew how important it was to replicate it as closely as possible.”

As the months went on, Baker realized that her original vision of an AR experience wouldn’t best serve the project. After putting on her first virtual reality (VR) headset, she came to the realization of how she would display her work.

“I knew right away that virtual reality was how I wanted to share the stories of Nevada’s neon history,” Baker said.

She went to work on a VR exhibit where people could experience Nevada’s past neon culture. After a year of work, the graduate project came together as a complete VR experience.

In this virtual space, people can move through a dusky, digital Nevada desert where the signs live, even interacting with some of them by picking them up and dancing with the Mapes Cowboys. Stands in front of each sign display their unique history, and a few feature other media, such as a short documentary on the preservation of Vegas Vickie.

During the time that Baker spent working on this graduate project, she received instrumental help from the faculty at the Reynolds School. While in class with Associate Professor of Practice in Science Communication Kathleen Masterson, Masterson introduced Baker to the staff at the University Library’s @One Digital Media & Technology Center. Those at the @One helped Baker throughout the project by troubleshooting technical problems and providing support when she got overwhelmed.

“I knew if I pushed myself to do something completely different and out of my comfort zone, I would have a tremendous amount of support from [people around campus],” Baker said. “And I did, even during the pandemic.”

Since graduating with her master’s degree from the Reynolds School in 2021, Baker has gone on to pursue her doctorate in integrative neuroscience at the University of Nevada, Reno.

“There are very few creatives like [media students] that venture off into the sciences,” Baker said. “The program directors are just as excited to have someone with an untraditional, creative background, as I am to learn how I can contribute to the sciences.”

It was through working on a class assignment for her master’s degree to write a story for the Hitchcock Project for Visualizing Science that Baker decided to explore psychology and realized the potential in tying her work in visual communications with scientific research.

“Because I was working in VR and AR, I focused on that [in my neuroscience studies],” Baker said. “This is where I found the happy marriage between visual communications and science.”

University students and faculty interested in experiencing Baker’s project can reserve a VR station in the @Reality media lab in the Knowledge Center and request access to the project during their visit.