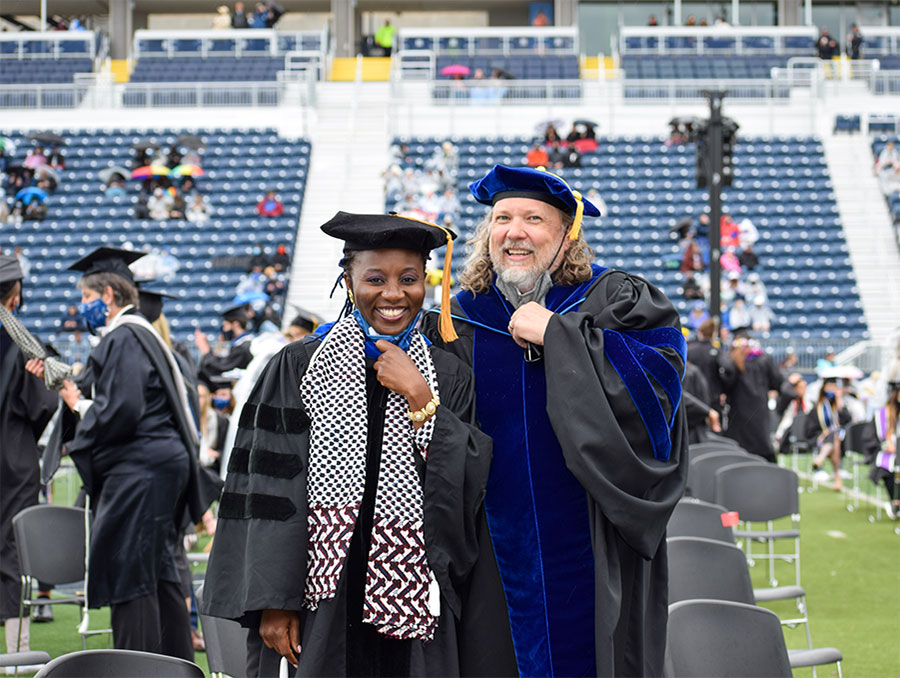 The College of Liberal Arts program in judicial studies graduated the 21st and 22nd judges from its Ph.D. program. Judge Melissa Jones and Judge Ari Tobi-Aiyemo joined the ranks of judges with a doctoral degree in judicial studies. More notable though, Judge Tobi-Aiyemo is the first Black woman in the country to earn this degree. She was also the first international student and judge to earn this degree in the program’s history.

Judge Ari Tobi-Aiyemo currently resides in New York City. She retired from the bench in 2019 from Lagos State Judiciary, Nigeria.

“The past six years of judicial research at the University of Nevada Reno has been a trailblazer experience in three significant facets of my life – personally, socially and judicially,” Tobi-Aiyemo said.

Tobi-Aiyemo talked highly of the amazing judges and fellow students she met during her time in the program from all over the U.S. and internationally from Africa, Canada and Jamaica.

“It amazed me that we had similar experiences despite our diversities and the climatic variations – unrealistic social expectations and judicial dilemmas in performing our judicial roles,” Tobi-Aiyemo said.

These social experiences inspired her research. Her dissertation, “The Role of the Nigerian Judiciary in a Democracy: A Judge’s Dilemma,” was a combination of all the courses she took while in the Ph.D. program. Tobi-Aiyemo said all of her professors influenced this research greatly.

“The diverse local and international judicial perspectives I gathered combined to create my perception of courts' revolving role in society and also the socio-judicial theory,” Tobi-Aiyemo said. “Hence, I argue that courts are agents of social change within our eclectic global village.”

Tobi-Aiyemo said it’s a bittersweet feeling to know she is the first Black woman to earn the Ph.D. in judicial studies. She said she is flattered, but is also saddened that it has taken this long for a person of color to hold this honor. “I hope this will inspire more Black female judges to challenge and pursue this degree that furthers judicial and eventually democratic development,” Tobi-Aiyemo said.

Now that she has graduated, Tobi-Aiyemo will return to New York. “I plan to collaborate with the National Association of Women Judges to encourage judicial education among women judges.”

Tobi-Aiyemo also plans to collaborate with the judicial studies program at the University to educate judges on the real and ideal roles of courts in society.