Mary Turner, M.D. ’73, a pioneer who never intended to blaze a trail for women

Dr. Turner was the only woman in the University of Nevada School of Medicine inaugural Class of 1973 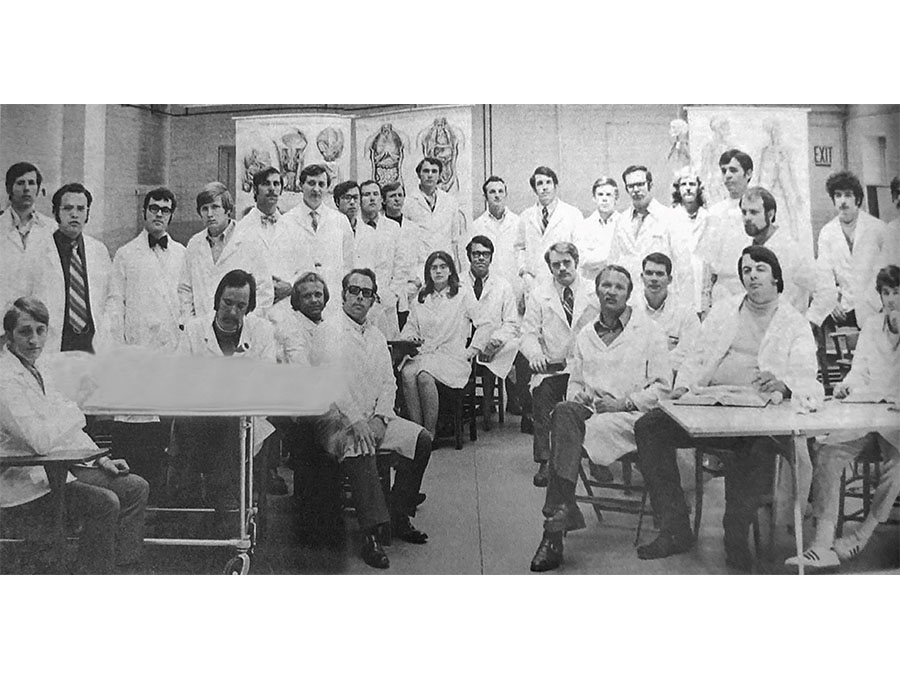 Mary Turner, M.D. ’73, a pioneer who never intended to blaze a trail for women

Dr. Turner was the only woman in the University of Nevada School of Medicine inaugural Class of 1973

The year was 1969. Nevada Governor Paul Laxalt was signing Assembly Bill 130, officially creating the University of Nevada School of Medicine. In Washington, D.C., Mary Turner was a copy editor for a scientific magazine with dreams of becoming a doctor.

“I knew I didn’t want to be a copy editor or in an office position forever,” said Dr. Turner. “I wanted to help people, and I knew I had the intelligence for medical school. I planned on being a pediatrician.”

Dr. Turner had a longtime affinity for Reno and Lake Tahoe. Her father was a Reno native, and both brothers moved there as adults. “I always thought of Reno as home,” she said.

As she headed West to begin her medical journey, Dr. Turner didn’t realize she was making history. Among the 31 incoming medical students in the University of Nevada School of Medicine’s inaugural class, she was the only woman – a fact she didn’t learn until she arrived, but one she took in stride. “It wasn’t a big deal for me. I was confident in my abilities,” she said.

In the 1970s, the University of Nevada School of Medicine provided future physicians with two-years of instruction, and Dr. Turner made the most of it. She especially enjoyed the School of Medicine’s behavioral sciences curriculum, along with interacting with patients while shadowing a physician at the local hospital.

“The feedback from patients was often good. Patients said they appreciated the time and attention from the medical students,” she said.

After completing two years of medical education in Reno, Dr. Turner decided to take a year off to be sure of her plans and then earned her M.D. at the University of Maryland Medical School. Following a three-year psychiatry residence at University of California, Davis, in Sacramento, Dr. Turner returned to Reno to complete one year of the family medicine residency.

She looks back fondly on her time at the University of Nevada School of Medicine. “My memories are good.”

When asked if she experienced challenges in her medical training amid all-male counterparts, Dr. Turner says she was more concerned about doing her best, for herself and her patients. She viewed the male students as classmates, not competitors.

“I could, and did, talk to my classmates about a lot of things, but there were times it would have been nice to have a fellow woman to talk with,” she said.

When asked about bias, Dr. Turner remembered one classmate who told her during the first year that he had realized that a woman’s perspective could be valuable in learning medicine. She felt it was a compliment.

“Not only is gender equity key to achieving excellence in academic medicine, but it’s also essential for economic prosperity, overall,” said Nicole Jacobs, Ph.D., UNR Med associate dean of diversity and inclusion. “Gender equality is a human right. Societies that value women and men as equal are safer and healthier. Women are a powerful force, and just as they bring strengths to medicine, they’re also bringing about needed change.”

Providing shoulders to stand on for those who come next

Today, Dr. Turner has retired in Canada after 30 years of general practice. She’s happily married to her partner of 41 years, with whom she raised two children. She spends her free time singing – “virtually,” at the moment, due to COVID-19 – with the three choral groups she’s been involved with since 1990. She also serves as secretary of the Board of Directors of Ante Meridiem, an Edmonton community chorus.

Dr. Turner returns to Reno from time-to-time to visit her alma mater, and the changes she was most impressed by are UNR Med’s world class educational technologies, such as the robotic simulation patients. However, she’s pleased that one thing has remained the same from her medical school days – small class sizes. “Learning is much better in smaller classes. It keeps the emphasis on people and patients,” she said.

When asked if she has advice for a woman – or for anyone – considering a career in medicine or STEM, Dr. Turner offered the following:

In honor of Women’s History Month, we encourage you get involved!

UNR Med Group on Women in Medicine and Science

The UNR Med Group on Women in Medicine and Science (GWIMS) advances the full and successful participation and inclusion of women within academic medicine by addressing gender equity, recruitment and retention, awards and recognition, and career advancement.

Committee on the Status of Women

The Committee on the Status of Women (CSW) is composed of faculty and staff who are concerned with and address the issues and concerns of gender equity on campus and provide support and networking opportunities for University of Nevada, Reno women and men.

Experienced physician, researcher, mentor and educator to lead the obstetrics and gynecology department at the University of Nevada Reno School of Medicine (UNR Med) and Renown Health.