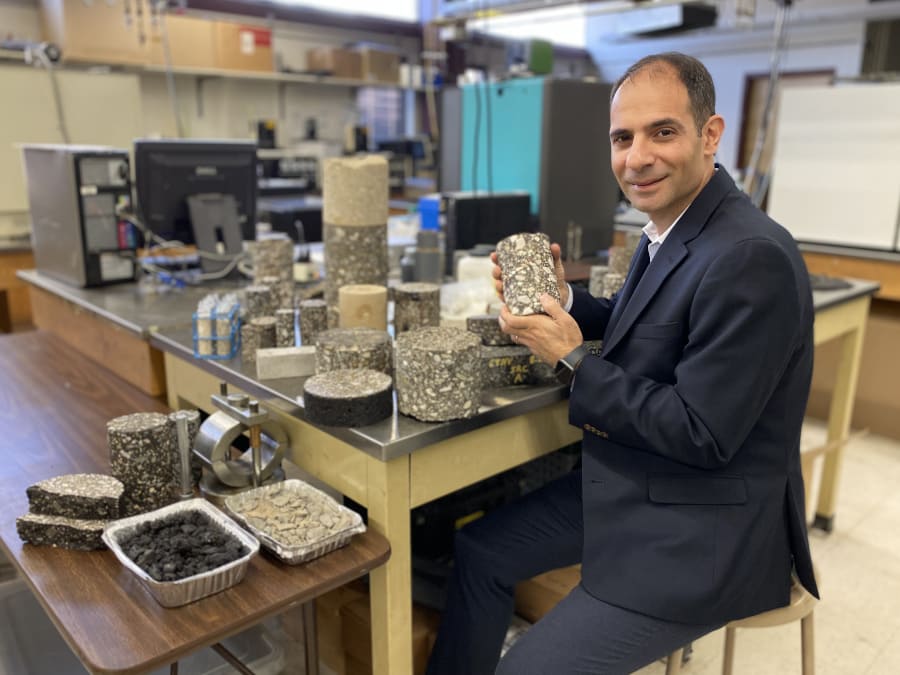 So, you’re in your car, driving east from Reno on the freeway. You’re traveling at the posted speed limit, loving the synchronicity of doing 80 on Interstate 80. The highway is mostly smooth, mostly level and mostly straight. Periodically, you experience some spots where the road is rough. Traffic is light as you travel up and down some hills and round a few gradually winding curves. You take an offramp for a quick break, slowing down, then braking at the stop sign before turning onto the frontage road.

When the Federal Highway Administration sought a new system for estimating the costs associated with operating vehicles – data that’s integral to roadway designs – the team of pavement engineering researchers at the University of Nevada, Reno seized upon the opportunity.

Five years later, led by University pavement researcher and civil engineering associate professor Elie Hajj, the University’s Pavement Engineering and Science Program, or PESP, has completed its innovative work that will impact how roads and highways are designed, built and improved for decades to come.

To the average person, it’s just asphalt, pavement or streets and highways. To the federal government – and to us as the taxpayers and users of public roadways – there are billions of dollars in transportation investments at stake.

That’s why federal and state governments continuously evaluate the performance of the nation’s transportation system, the network of roads and highways used by millions of drivers every day. That evaluation has the aim of improving materials, designs, traffic flow, safety and overall system efficiency – and can help minimize environmental impacts from vehicles in regards to global warming.

Vehicle Operating Costs, or VOCs, are a major component in measuring and improving the country’s transportation infrastructure and saving drivers money. Reliable VOC estimates may also aid auto manufacturers in their vehicle designs.

A David among the Goliaths: a novel approach

When the Federal Highway Administration’s nearly $1.6 million grant opened for proposals in 2014, Nevada Automotive Test Center in Dayton, an industry partner with the University’s pavement program, explored the opportunity with Hajj.

Hajj was well aware of the daunting task his relatively small team of collaborators would face in taking on the entrenched, giant transportation research firms and larger universities who have for years dominated the industry. To have a shot at winning the grant and the research project, they knew they couldn’t compete head to head; they’d have to create their own lane for the University by coming up with a novel approach.

After months of intense study, brainstorming and identifying the expertise and partners needed, the team came up with its proposal to the Federal Highway Administration. The team proposed a nontraditional approach, one that focused on utilizing data from a variety of current sources to build elaborate computer models, validated by actual road-test vehicles.

Hajj’s team submitted the 28-page technical grant proposal in July 2014; that September, they were notified they’d been selected in the highly competitive process. The fresh approach had earned the University program the grant.

The team’s work would ultimately result in far more than just a research study; it produced an entirely new, effective and efficient model for determining vehicle operating costs. The new model accounts for today’s materials, designs and vehicle technologies – with flexibility to be applied to whatever the future brings.

“Since the 1980s and ’90s, the same model was being used and slightly modified year by year,” Hajj said. “But technology has changed. Pavement materials and designs have changed. Vehicles have changed. This model gives appropriate estimates for today’s technology, including gasoline, hybrid and electric vehicles. And it is certainly adaptable to new technologies as they develop. That’s a big plus.”

Hajj and his team, which included the Nevada Automotive Test Center and Dynatest engineering services, pitched their nontraditional concept to the Federal Highway Administration, knowing the risks. “Doing something unique, something different comes with a risk, because when you put something like this on the table, the response could be, ‘Nope, that’s not what we’re looking for,’” Hajj said. “Or it could be, ‘Hmm, that’s interesting.’ It’s double-edge, it’s high risk. But it’s a worthwhile high risk, given everyone else’s capabilities compared to our size. To be viable we had to go that route. We didn’t have any other options.”

It makes sense that the overall costs of operating a vehicle are dependent on many factors, such as fuel consumption, tire wear, oil consumption, mileage-related vehicle depreciation, and repair and maintenance. What may be less obvious is that the costs of operating our vehicles are impacted by roadways and their characteristics such as curvature, roughness, slope, speed, traffic congestion, traffic control devices such as signals and intersections.

Since the 1990s, the Federal Highway Administration has evaluated the network using the Highway Economic Requirements System, which is based on the 1982 research by J.P. Zaniewski and his colleagues, the last major model created for estimating vehicle operating costs that became the industry standard.

That model was mainly based on physically test-driving of selected types of common vehicles – referred to as the fleet – the standard practice for that era.  The new model created by Hajj’s team was made possible by the wealth of available information in today’s data-driven world.

In recent decades, various entities within the transportation, energy and vehicle industries have continuously developed or collected an endless array of simulated computer vehicle components and related data. This is where Hajj’s team showed the ingenuity that had won the federal grant.

The aim was first to produce a range of “driving cycles,” which graph a vehicle’s speed over a certain amount of time, a “snapshot” of its performance in various scenarios. For example, a driving cycle for a vehicle on a smooth, straight freeway is naturally different from a driving cycle for the same vehicle on a curved, uphill roadway with traffic signals. Over many months, Hajj’s team, University Associate Professor of Engineering Hao Xu in particular, analyzed, sifted and tested data, primarily the mountain of national data. The recent Strategic Highway Research Program 2 naturalistic driving study and the American Transportation Research Institute, combined, provided more than 23 million seconds of data.

Like an auto enthusiast building a car from a collection of parts, virtual vehicles were assembled by melding together data for a simulated drivetrain from one source, a simulated chassis from another and engine performance dynamics from yet another. That process continued until all the necessary components were in place for a “fleet” of 30 virtual vehicles.

These virtual vehicle representations on computers are designed to act, react and respond to various inputs the way actual vehicles are predicted to do in real-world conditions. Over 52,000 simulation scenarios were executed representing a range of driving cycles and road conditions – vastly more than would be feasible with physical road tests.

This “mashup” of data hadn’t been done before. “It was extremely challenging,” Hajj said. “We’d put in a lot of time to get to a point, and then, ‘How are we going to overcome that obstacle?’ We need to keep digging, looking at all of this, then it comes. You work it out. Even now I go back and look at it and I’m proud of the things we were able to accomplish. Wow.” Hajj is now creating a simple-to-use online calculator based on the University’s model, for use by those in the transportation and related industries and government entities.

Proud of the total team effort

According to Hajj, the Pavement Engineering and Science Program submits a half-dozen grant-funded project proposals in an average year. The Federal Highway Administration project is another of the program’s many success stories. “We excelled as a team because we covered all the expertise needed in the critical areas,” Hajj said. “It was a very successful selection of players. Now that we’re done with the project and I look back, we made the right decision to have all the players, because we used the expertise of each one throughout the entire project. They were each important and critical.”

Hajj beamed as he discussed a video touting a major, global transportation software company. The closing frames feature an impressive list of institutions cited as research sources. Alongside MIT (Massachusetts Institute of Technology), Michigan State and other top industry names – there is his source of pride: the official seal of the University of Nevada, Reno.

“Our work will carry the name of our University for the next 20 to 30 years with this model we have developed with the Federal Highway Administration,” he said. “Our research helps get our University’s name out. Having others become aware of the value of these models will help a lot.”

Hajj noted that not only was his team gratified by what they’ve accomplished, the funding agency was as well: “The FHWA (Federal Highway Administration) was extremely satisfied with our work and our efficient documentation, which made it easy for them to begin using our model.”

Hajj sees his team’s accomplishments from the past five years as having a long-lasting legacy for the University. “I’m very proud, definitely,” he said. “We had the right team for the right project at the right time.”

The University of Nevada, Reno’s Pavement Engineering and Science Program focuses on innovation, research and development resulting in asphalt mixtures that are cost-effective, environmentally friendly and durable. Home to the Western Regional Superpave Center, the program collaborates with leading industry and agency partners, and features internationally known faculty and a wide network of alumni across industry and academia.