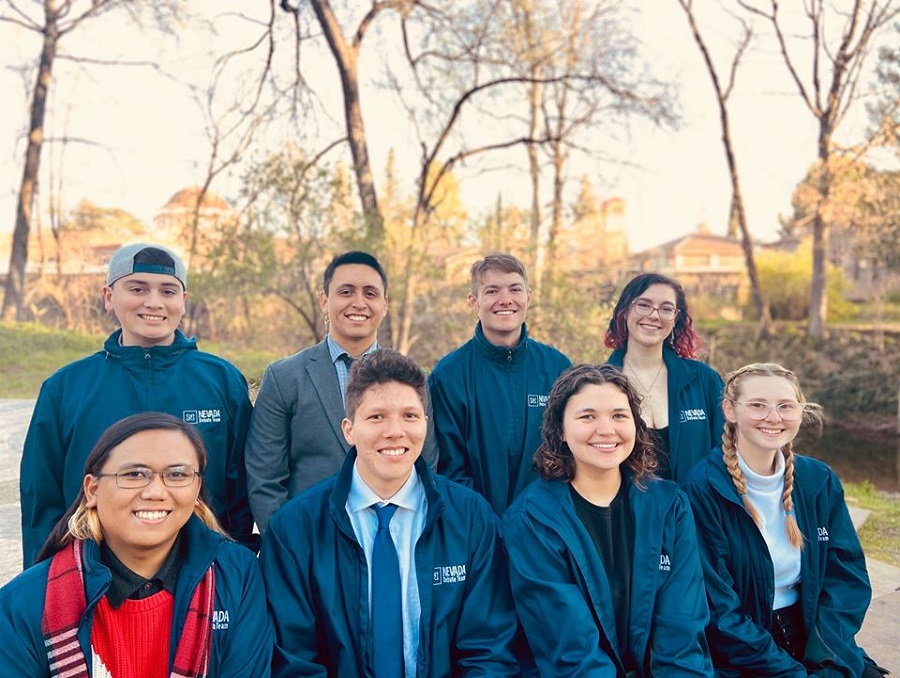 The University of Nevada, Reno Debate Team’s 2019-2020 season ended early due to the cancellation of events and closure of schools during the coronavirus pandemic. All members of the team competed in their last competition without knowing it, as all future competitions and events have been cancelled.

Many are feeling some sort of loss due to the pandemic, with sporting events cancelled, classes transitioning online and graduation postponed. College life has dramatically changed for students across the globe.

“While I think it is important to use caution and protect the community from the spread of a pandemic, I am deeply sorry for the lost opportunity these debaters have worked so hard toward, especially the seniors around the country whose path, which could have been up to nine years has ended,” Philip Sharp, debate team coach and forensics director in the College of Liberal Arts, said.

The Team finished 12th overall in the nation for the season-long NPDA sweepstakes and second place overall in the Intermediate Division, which consists of points earned by debaters in their first or second year of college debate, if they did not compete in high school. Many members of the debate team fall into the Intermediate category.

The Associated Students of the University of Nevada have also recognized Sharp as Club Advisor of the Year for his role as Director of Forensics and debate team coach.

At their regional competition, the team advanced three of the four duos to the elimination round of Parli Debate, with Jordan Cosselman and John Villanueva advancing to the semifinals. Three other teammates finished in the top-10. Alfonso Gonzalez took second place in finals in the Lincoln Douglas Debate and was recognized as third speaker overall, with fellow team member Avery Callis taking seventh overall.

The opportunities to travel and compete are made possible by scholarships and expenses paid for by the Dr. Robert S. Griffin/W Clark Santini Memorial Endowment. This year, the Nevada Debate team set out to raise $14,000, helping the Griffin/Santini Endowment reach a milestone of $250,000 total. The fund is still open for donations, which will be used for travel expenses and student scholarships for future seasons.

“Donating any amount of money not only supports the Nevada Debate team financially, it supports its members,” Sharp said. “Debate builds character and confidence in the students who participate. Contributions help make it possible for the students to compete at the national level and keep its historic legacy alive.”

Sharp was excited about the students on the team this year, as most students were just starting their journey into the world of college debate. First-year students went against competitors with years of experience under their belts and did exceptionally well.

“The team this year is young; most are in their first or second year of college debate and several of them didn’t debate in high school,” he said. “So it’s been exciting to watch their progress over the course of this year and last year and there have been promising performances that suggest we’re going to be having a lot of success throughout the next couple of years as those students mature to juniors and seniors.”

Students of the Nevada Debate Team

This year, the Nevada Debate Team consisted of eight students total. The smaller team was not a disadvantage, however. It allowed the opportunity for each student to receive more personalized coaching during practice, and the team had the chance to become a tight-knit unit.

“This season has been really strong,” Cosselman, a University junior and debate team member, said. “It has been a lot different than last year because last year we were all basically in our first year, so we were all kind of learning the ropes. This year, a lot of the groundwork has already been done. Instead of going to debates to learn the basics, we’re actually going in and implementing our skills. It’s really cool to see the difference.”

Students spent 10 to 20 hours practicing and preparing for tournaments each week. Practice consisted of mock debates and speed drills, as well as lessons on how to speak and read quickly and precisely. The night before a match, students usually gathered from 9 p.m. -3 a.m. reading the latest news to prepare for the topics they might be asked about the next day.

Outside of practice, they kept up with current events, such as American politics and international affairs. Popular topics during the season were the Democratic debates, Brexit and the coronavirus.

Debate team member Jade Whitbeck, a freshman majoring in social work, did extraordinarily well for her first season on the team. Excitement and passion are evident in her voice as she recalled her progress.

“I had a wonderful season,” Whitbeck said. “In just one season of debate, Phil has gotten me to the highest level of competition that’s available in our district, so that’s astounding to start with. I’m very pleased with having the opportunity to compete in the open division.”

At their regional tournament, Whitbeck placed fourth for overall speaker in the open division against students who had been debating for five or more years. She is pleased with her progress and excited for the years ahead.

Gonzalez, a second-year student at the University, speaks proudly of his time on the team and how debate has affected him personally. When it comes to his experience on the team, he has a powerful message to send.

“I want to encourage people to understand the nuances of debate because I think there’s a lot of generalizations that are made that lead to some nihilistic views of debate and people don’t view it as what it can be,” Gonzalez said.

Gonzalez hopes others can understand the difficult topics they debate and the opportunity it can provide to lead to great conversations and deeper insight on an issue at hand.

To learn more about the NPDA, view national results archives, participation forms and more, visit the  NPDA website. For more information about the University's Nevada Debate Union - part of the Department of Communication Studies in the College of Liberal Arts, or to join the team, contact  Sharp at  psharp@unr.edu.