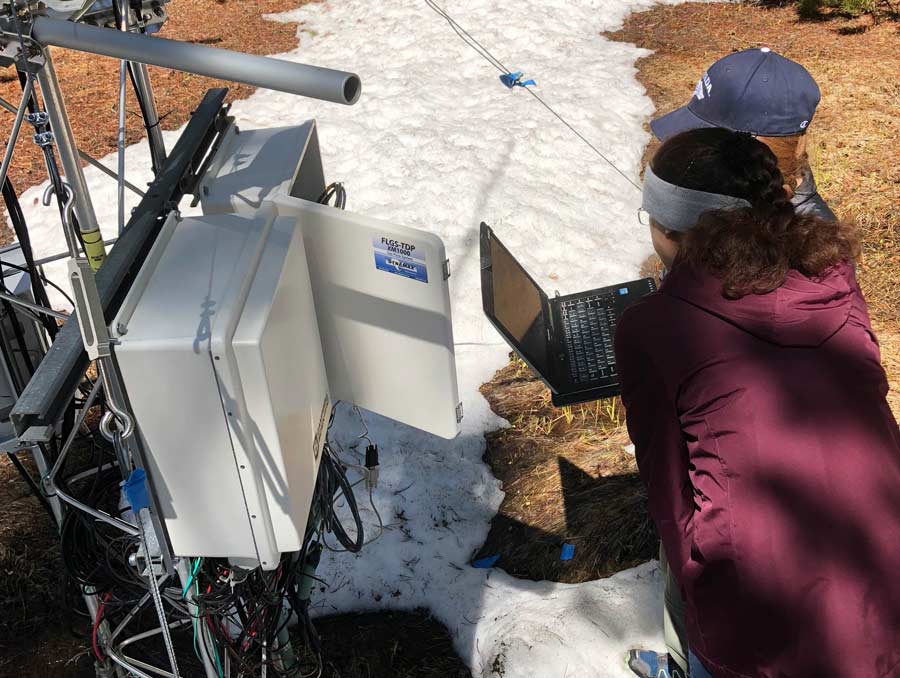 The forest of the Sierra Nevada mountains is an important resource for the surrounding communities in Nevada and California. Thinning the forest by removing trees by hand or using heavy machinery is one of the few tools available to manage forests. However, finding the best way to thin forests by removing select trees to maximize the forest’s benefits for water quantity, water quality, wildfire risk and wildlife habitat remains a challenge for resource managers. The U.S. Forest Service is leading an effort to balance all these challenges in landscape-scale forest restoration planning as part of the Lake Tahoe West Restoration Partnership.

As part of this effort, the University's Adrian Harpold recently led a team in developing a modeling tool to focus on the issue of water quantity. The tool predicts how different approaches to thinning the forest impact snowpack accumulation in Lake Tahoe, which controls how much water is available for downstream communities such as Reno.

“The snowpack we’ve relied upon is under pressure from years of fire suppression that increased tree density, combined with the effects of climate change and warming temperatures,” Harpold, natural resources & environmental science assistant professor with the College of Agriculture, Biotechnology & Natural Resources, said.

He explained that too many trees means less snow reaches the ground. In addition, when many trees are clumped together, they warm up and release heat, which can melt the snow on the ground. However, too few trees means the snowpack is less protected from the sun and wind, which also melt snow.

The tool, developed with funding from the College’s Experiment Station and the U.S. Forest Service, was built to specifically model the west shore of Lake Tahoe, which the team felt was a good sample of the Sierra Nevada forest. The team initially created a small-scale high-resolution model using data collected with 3D laser scanners, called “LiDAR.”

“The LiDAR data lets us see individual trees, which we use to ‘virtually thin’ the forest by taking trees out of the model,” he said. “As such, it lets us create a thinning experiment that’s realistic. We can then represent different management actions, such as removing trees below certain heights.”

His team, including the post-doctoral scholar Sebastian Krogh, graduate student Devon Eckberg, undergraduate students Makenzie Kohler and Gary Sterle, the College’s Associate Professor of Remote Sensing Jonathan Greenberg and University of Arizona’s Patrick Broxton, tested the model’s accuracy by conducting thinning experiments and comparing the predictions to measurements in the real forest. Results were discussed in a recently published article on the proof-of-concept for using high-resolution modeling to predict the effect of forest thinning for snow, for which Harpold was the lead author.

Once the team determined the model was working correctly, they increased the model size to represent Lake Tahoe’s western shore. Results are discussed in another recently published article on using the model to predict the effects of forest thinning on the northern Sierra Nevada snowpack, led by Krogh with Harpold, Broxton and the Forest Service’s Patricia Manley as co-authors. Their experiments showed that overall, more trees removed means more snow maintained. However, there are beneficial ways and detrimental ways to remove trees. The method that appeared to be most effective was removing dense trees that had many leaves and branches and were shorter than about 50 feet, leaving behind taller trees. There were also differences in effectiveness depending on the elevation, the slope and the direction the slope was facing.

Harpold plans to continue expanding the model, testing to see if it will work for Lake Tahoe’s eastern shore and in the American River Basin, with the ultimate goal of providing a tool for Forest Service decision-makers and others to inform their forest-thinning plans.

The water-quantity tool is one of many different modeling tools being developed with funding from the Forest Service as part of the Tahoe-Central Sierra Initiative, which aims to quickly restore the forest to improve the health and resilience of Sierra Nevada mountains and maximize the benefits that the forest provides.

“My decision-support tool for water quantity would be a smaller piece in a larger toolkit to help determine how and where to thin the forests,” Harpold said.

For more information on the water-quantity tool, see: “Increasing the efficacy of forest thinning for snow using high-resolution modeling: A proof of concept in the Lake Tahoe Basin, California, USA” in the journal Ecohydrology, and “Using Process Based Snow Modeling and Lidar to Predict the Effects of Forest Thinning on the Northern Sierra Nevada Snowpack” in the journal Frontiers in Forests and Global Change. For more information on the larger forest-thinning project, visit the Lake Tahoe West Restoration Partnership or Tahoe-Central Sierra Initiative websites.