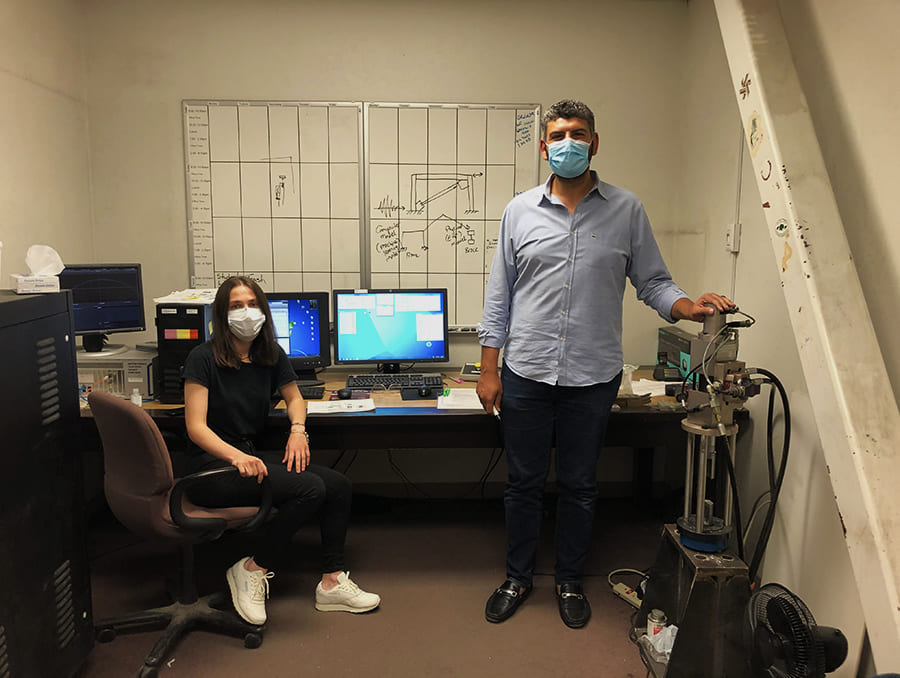 In the shadow of the shake tables in the James E. Rogers and Louis Wiener, Jr. Large-Scale Structures Laboratory, postdoctoral researcher Elif Ecem Baş has been working on a physically small project with big implications.

The University is home to one of the largest earthquake simulation laboratories in the world, but running a full-scale experiment on a prototype requires an incredible commitment—of personnel, material, space and money. For several decades, researchers have overcome the cost of running these experiments by using a hybrid cyber-physical simulation method that requires a fraction of the space of full prototype experimentation. For instance, if a researcher wanted to test a new structural retrofit concept such as new types of braces for potential use in a building or bridge, instead of building a whole bridge and putting it on a shake table, the new component (model brace in this example) alone could be physically simulated and tested using online seismic loads that are calculated from a computer model of the rest of the structure. Several brace models could be subjected, for instance, to the 1989 San Francisco earthquake, and researchers would be able to tell which design could provide a better retrofit option to improve resiliency in the face of future earthquakes.

While effective, traditional hybrid simulation has its own constraints as defined by the driving online computational model. While testing a single brace in a single situation within a small structure is possible to conduct in a few minutes, testing larger or more complex structures would be computationally too expensive or would not be possible for certain modeling scenarios.

Enter Baş and the computational power of machine learning.

“The traditional hybrid simulation lab has its limitations,” Baş said. “We wanted to overcome these limitations with machine learning models.”

Moustafa added, “I had an idea that machine learning might be able to advance cyber-physical hybrid models. But it was only because of Ecem’s brightness and sharpness that we were able to bring machine learning to the project. She went to the computer science department. She took the classes. She excelled, and she figured out what programs and algorithms would work for us. It is the first time ever to successfully use machine learning modules in these applications.”

To use the example of the model brace, Baş still hooks an experimental brace model for a new design up to a physical loading frame. But because the behavior of the structure that would house this brace in real-life is known, such structure lives in an algorithm in Baş’s computer. And here is where the giant leap forward happens. By having the brace communicate with the algorithm and the algorithm communicate in real time with the physical lab including the loading frame subjecting the brace to physical stresses, how the two components of the experiment will survive a far greater number of scenarios can be tested and can be tested in a very short period of time. The known behavior characteristics of one component are impacted by and impact the unknown behavior characteristics of the experimental component, each reacting to the other in real time.

While effective for testing a single brace, in this method lies the potential to test more and more complicated nonlinear structures.

“We are still improving the models. We want to try to see how far we can go with this technique,” Baş said. “We could do much, much more.”

By taking advantage of the computational power of machine learning models, Baş hopes to be able to move more and more components into the cyber realm and use them to test other novel design elements.

“Incorporating machine learning into the hybrid simulation laboratory really opens the door for unprecedented testing methods,” Moustafa added. “It can provide proof of concept for novel ideas, and because our lab setup is compact, it can be used far more widely than traditional methods for exploring new ideas and providing hands-on demos for our students.”

As Baş defended her dissertation, she also participated in the 3-minute Thesis Video Competition hosted by MECHS (Multi-Hazard Engineering Collaboratory for Hybrid Simulation), an NSF-funded Research Coordination Network housed in Purdue. The competition received submissions from around the world, and Baş’s video won in the Novelty category.

“The competition was a chance to show my work,” Baş said. “Winning makes me more visible in the field, and now, more people know what I’m doing.”

Moustafa added, “Typical entries come from big schools from Berkeley, Toronto, Italy,” Moustafa said. “To be featured is a good surprise. To win is a big deal.”