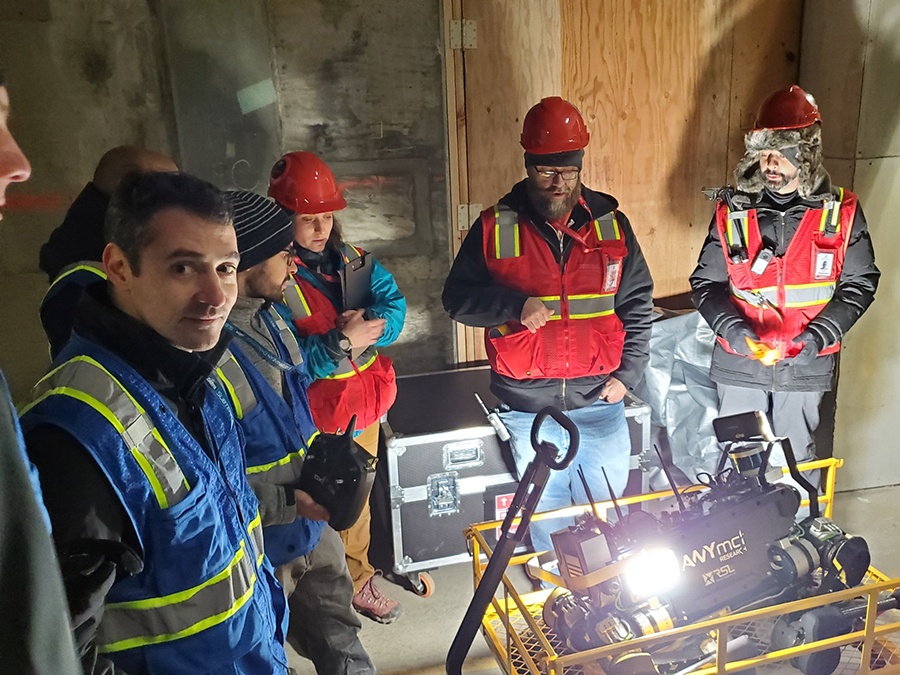 Robots are released into an abandoned nuclear power plant and teams get points for finding the most objects – no, it’s not a video game, it’s top international robotics teams deploying a cadre of flying, rolling and walking autonomous robots to search for and find the artifacts.

The teams, including University of Nevada, Reno’s Team CERBERUS, were competing in the DARPA SubTChallenge robotics competition’s Urban Circuit, the second in a series of four competitions. It took place at the end of February in the Satsop Business Park in Elma, Washington, which is a never-used nuclear power plant with massive infrastructure.

There were four courses, or runs, set throughout the structure with obstacles such as wires, pipes, posts, columns, curved walls, railings, metal floor grates, barricades and staircases in a network of tunnels and rooms of various sizes.

The Urban Circuit was meant to represent human-made urban environments such as municipal infrastructure and mass transit that can have complex layouts with multiple stories and span several city blocks. These areas are critical for search and rescue, security and other application domains. Teams deploy autonomous systems to attempt to map, navigate, and search the various underground environments.

CERBERUS is an international robotics collaboration based in the University of Nevada, Reno College of Engineering. 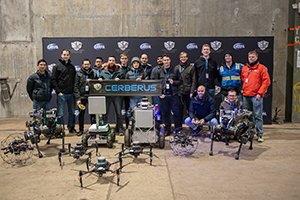 “What can we say of our robots reaching the nuclear reactor? The Urban Circuit was a fantastic process and great experience,” Kostas Alexis, CERBERUS team leader and associate professor in the University’s Computer Science and Engineering Department, said. “Our legged and flying robots performed reliably, with fully autonomous exploration, descending stairwells with the flying and walking robots and operating with non-stop exploration in almost all the missions we faced. Still, we faced several hard challenges and thus lots of work is to be done.”

The teams coordinated and operated from a base area and weren’t allowed on the course during the competition, earning points for finding and cataloging the objects in the narrow passageways, with dim lighting and obstacles to be avoided. CERBERUS operated up to five robots on the course for round two, day two, of the five-day competition.

“During our four ‘runs’ we had one major challenge: communications,” Alexis said about the ability for their several robots used in the missions to talk to one another. “Then the most difficult part technically was related to ascending and descending stairs, and we were pleased with the robot’s performance.”

The teams were allowed up to an hour for each run and were scored on number of artifacts found and numbers of sectors reached in the massive facility. CERBERUS got a score of “7” (reflecting the max of artifacts found in the four runs as per the DARPA rules) and placed fifth out of 10 teams.

The team learned much from the urban competition, and how the robots interact, and will continue to emphasize the collaborative approach to the robots working together as the competition moves to the third round in August 2020.

The third Challenge is the Cave Circuit, which refers to the exploration of natural cave networks - environments that are also crucial for a variety of search and rescue applications. Natural cave networks often have irregular geological structures, with both constrained passages and large caverns.

“We fundamentally emphasize on the potential of the combination of walking and flying robots to have a greater impact,” Alexis said. “This is the same direction that we will push for the Cave Circuit. At the same time we plan certain improvements, namely a new version of the ANYmal legged robot that is approximately two times as powerful in terms of locomotion skills, the deployment of flying robots from the ground ones, and enhanced robot planning behavior to explicitly search for artifacts (and thus maximize score).”

Team CERBERUS’s walking and flying autonomous robots are equipped with multi-modal perception systems, navigation and mapping autonomy and self-organized networked communications. These features enable robust and reliable navigation, exploration as well as mapping and object search – without the use of GPS.

“Stay tuned for all the progress in how CERBERUS, the walking and flying collaborative robotic system of systems, will approach the Cave Circuit,” Alexis said. “DARPA for sure will prepare an outstanding and very hard challenge and we look forward to the competition.”

The final event, planned for 2021, will feature a course that incorporates challenges from all three underground environments.